Aniya Wolf is a young woman who attends Bishop McDevitt High School, a Catholic institution in Harrisburg, Pennsylvania. She is also gay and has spent the entirety of her life dressing in clothing that she describes herself as feeling more comfortable in. Several weeks ago, she tried to attend the prom while wearing a tuxedo. She was denied entry for doing so. Girls were supposed to be wearing dresses, the school insisted, and Wolf’s refusal to do so forced their hand. This wasn’t the school’s fault, in other words: it was hers.

For this story to work, that last part there – that this is all her fault – has to hold water.

It is very easy to conclude that the school targeted Wolf for being gay. She is an out lesbian and she apparently makes no secret of it. The school is a Catholic institution and, presumably, remains as hostile to homosexuality as it is institutionally required to be. And although American Catholics are steadily embracing homosexuality, especially among the religion’s youngest adherents, there no doubt remains a virulent belief opposed to any change in the status quo.

But the school does not want to defend itself by emphasizing its maybe-opposition to students like Wolf. This is why the institution’s first line of defense was not to reference its ability to do whatever it wanted to kids like Wolf, but rather to insist that a dress code did not allow Wolf’s tuxedo. So let’s then start with the dress code, which is available here and is reproduced below:

Modesty is the overriding principles in determining dress for the dance. Keeping this in mind, the following dress code must be followed.

Dresses are to be formal.

Skirt and dress lengths must be no shorter than 3 inches above knee.If the dress has a slit, the slit cannot be any higher than the tip of the girl’s fingertips.

Dresses are not to have bare midriffs or be skintight. They should not ride up as you dance.

Backless dresses may not be cut below the natural waistline.

All necklines must be modest-NO PLUNGING NECKLINES!

Dresses may have spaghetti straps, halter type tops, or be strapless as long as they meet the neckline requirement.

Dresses that are laced together in the front cannot reveal bare skin under the lacing.

Dresses with cut outs are not allowed. When your arms are at your sides, there should be no skin visible in front of your arms. If a dress has cut-outs, it may be worn if it is altered so that cut-outs are lined with opaque (not see-through) fabric.

Sunglasses are not allowed.

Gentlemen must wear a suit and tie.

Dress shoes are required. No sneakers or boots.

No sunglasses, canes, hats, or other props are allowed.

Let us be immediately clear about something – this dress code absolutely does not forbid a girl from wearing a tuxedo to the prom. It does go into painstaking detail about which dresses are and are not allowed but nowhere does it say that girls are required to wear dresses. If there is any doubt about that, look at the first line of the requirements for the boys – “Gentlemen must wear a suit and tie.” The school was so damned sure that it wanted boys to wear suits and ties that it said so explicitly. The dress code for girls contains no such directive, only the implied idea that girls will be wearing dresses. This perhaps goes a considerable distance in explaining why Wolf”s parents felt that her tuxedo was allowable.

It is also true that Wolf’s tuxedo satisfies all of the rules laid out for dresses – it is modest, it is formal, it is not shorter than three inches above the knee, it does not contain a bare midriff, it will not ride up as somebody dances, it is not backless, it has NO PLUNGING NECKLINE, it does not have spaghetti straps or halter tops, bare skin is not visible, there are no cutouts, there is no skin visible when arms are at sides, it is not see through, and, for good measure, Wolf was not wearing sunglasses either.

This though is less about what Wolf wore – she quite obviously followed the dress code’s direction in every imaginable way – and more about punishing her. Not that the school has the courage to say so of course. In fact, it went so far as to release a clarifying statement that included the following lie –

“Without question, we love, respect and cherish all of our students.”

The remarkable thing about that statement is that it was apparently made under the mistaken assumption that it would somehow clear the air, almost as if somebody would read that and conclude, “Well, I had assumed that when they kicked a gay kid out of a prom for wearing an entirely appropriate outfit, they were doing so because they had no respect for her whatsoever – especially considering the fact that she has repeatedly made it clear that she is not comfortable wearing clothing more traditionally associated with women – but they just said that they respect her, so I guess I ought to believe that instead.”

As social opinion has changed, casual bigotry has become a much harder trick to pull off, necessitating comments about loving and respecting and cherishing, even when actions entirely undermine such claims. This was at its height during the fight for marriage equality. Some social conservatives realized that outright hatred would no longer play to a national audience. It thus became necessary to couch explicit opposition to the idea of equality in language that seemed to imply, at the very least, decency, even if practical effect was preserving a fractured standard for citizenship. This was a bald-faced attempt to have it both ways, with reputations preserved despite calls for necessary inequality.

This same phenomenon played itself out at Bishop McDevitt. The school punished Aniya Wolf for the alleged high-crime of having not conformed to its poorly written dress code (even though she plainly did) but it did not want to be saddled with the entirely reasonable conclusion that would be drawn about its institutional position. So it asked anybody listening to believe three things at once – that it respects Aniya Wolf, that she should be treated differently than everybody else despite having followed the rules, and that these two things are entirely true.

Believing both of these is not easily achieved. But just for fun, let us assume that all three things are entirely true, and that the only reason Wolf got barred from her prom was because she had the audacity to violate the school’s poorly-written dress code, and that her exclusion was not in any meaningful way specific to her. If we believe that, then we have to assume that every violation would be worthy of exclusion from the prom, right? That is what the school wants and needs us to believe if its claim of loving and respecting and cherishing is to be taken seriously.

If only there was some way to measure whether or not a school had taken its sacrosanct dress code as seriously as it wanted us to believe. For instance, if there was a massive compendium of what everybody who had been allowed into the prom had actually worn that night, surely we could know just how intensely those rules were being forced..

Fortunately, two such collections exist, both published by Pennlive, both publicly available. Both compilations show exactly what we would expect them to. There are high school kids, awkwardly and sometimes terrible dressed, having a wonderful time. Nothing that they are wearing appears to be unacceptable in a general way and it is almost impossible to imagine anybody anywhere concluding otherwise. But the school’s stated concern is its dress code and, uhh…

Skirt and dress lengths must be no shorter than 3 inches above knee.If the dress has a slit, the slit cannot be any higher than the tip of the girl’s fingertips. 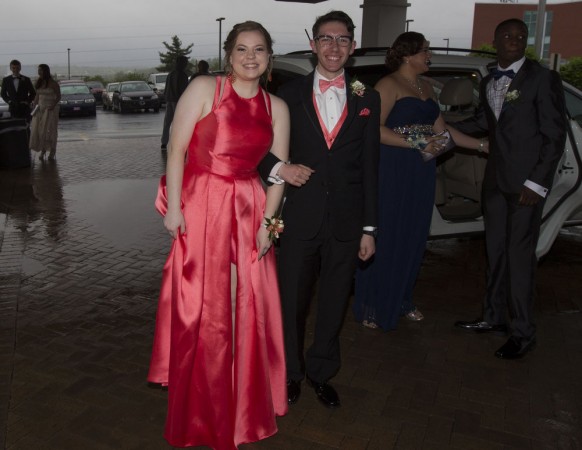 Dresses that are laced together in the front cannot reveal bare skin under the lacing. 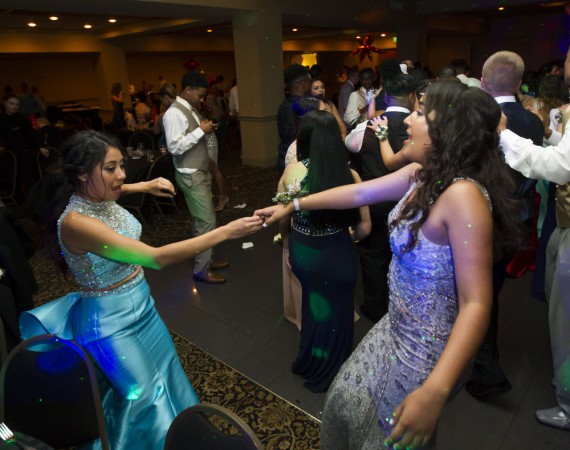 Dresses with cut outs are not allowed. When your arms are at your sides, there should be no skin visible in front of your arms. If a dress has cut-outs, it may be worn if it is altered so that cut-outs are lined with opaque (not see-through) fabric. 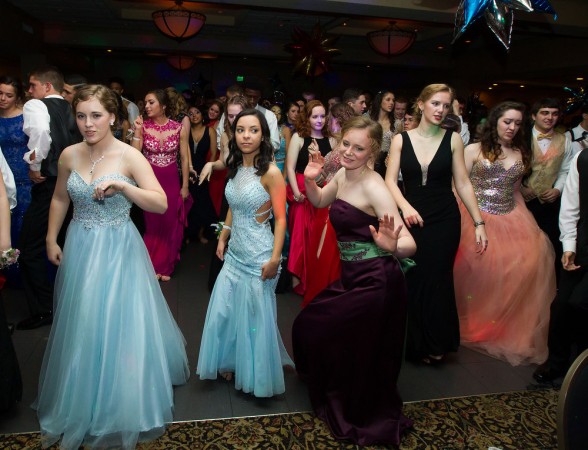 Despite searching for any evidence that anybody else was kicked out of the school’s prom for violating its alleged standards, nothing turned up. If it had happened, it is not difficult to imagine the school having lead with that in its self-defense. “We threw out lots of girls,” school officials might have noted. But they did not. It would seem that some dress code violations – crimes so carved in stone that they might as well have been Commandments from the tablets themselves! – are apparently more equal than others. 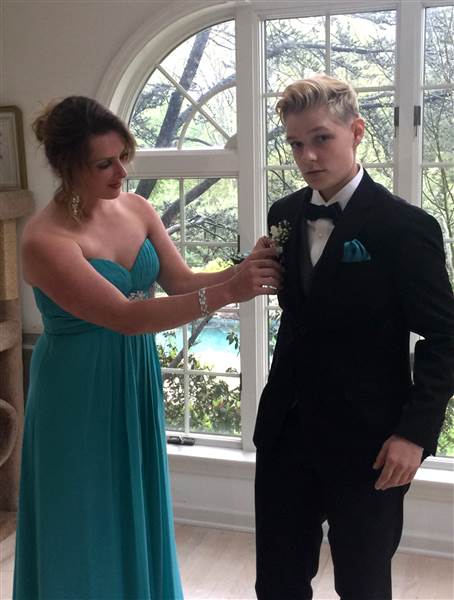 Clothing ordinances are generally ridiculous things, and they routinely single out girls for more scrutiny than they do boys. This school’s dress code is absolutely no exception, as it spends 181 words on what the girls are allowed to wear, and 25 words on what the boys are allowed to wear. Here is the alleged issue straight from the document itself –

Modesty is the overriding principles in determining dress for the dance

The extremely unfortunate idea behind dress codes is that girls are expected to police what boys are and are not able to see (as opposed to, say, expecting boys not to leer at girls). But that appears to not be the case at Bishop McDevitt even despite it being explicitly emphasized in the dress code itself. There, rules exist to enforce and encourage rigidly gendered roles based upon entirely sexist notions of who is supposed to wear what.

We can know this by looking at Aniya Wolf’s photograph. If the idea is to police modesty, then Wolf’s tuxedo ought to have been the platonic ideal. It would have literally been the most concealing outfit on any of the young women in attendance. But skin is apparently implicitly encouraged at Bishop McDevitt, as part of the reason that Wolf was sanctioned is simply that she is not showing enough of it. Had she worn a dress, she would have passed muster, even if such a dress had revealed far more of herself than she was comfortable doing. If only there was a word – a concept even – that might describe Wolf’s desire to shield her body from prying eyes.

So then, what to conclude from all of this? We could take the school’s word that it respects Aniya Wolf (even though she has said explicitly that she is uncomfortable in more traditionally feminine clothing) and that it values modesty (even though the school balked at allowing the most modestly attired female into its dance) and that its dress code is important (even though other violations went apparently unpunished). Or we could arrive at the obvious conclusion – that Bishop McDevitt’s story, predicated upon the idea that her exclusion from the dance was the result of Wolf’s behavior, is utter nonsense at best and an outright lie at worst. Instead, the proper understanding of the event is that the school excluded Aniya Wolf from its dance to punish her for being gay, and that while it was willing to look the other way in any other scenario, it threw the book at the one kid who was the most obviously different.

277 thoughts on “A Wolf In A Penguin’s Clothing”