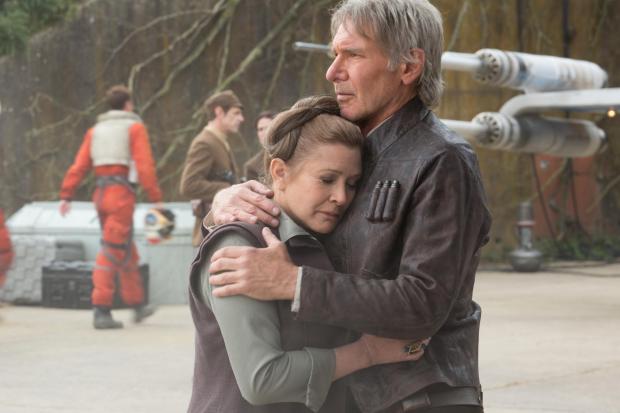 Like most people my age, I was introduced to Carrie Fisher through her iconic role as Princess Leia, she of the ridiculous hairstyle, the flowing white dress, the deep voice, and the smart-ass remarks. The first Star Wars movie came out in 1977, soon after I graduated high school. Hard to believe that was almost forty years ago. I think I saw Star Wars five times that summer and, although I’ve seen it several times since then, it’s never held quite the same magic for me as it did that summer.

I’d like to say that, at 17, I recognized Princess Leia as some kind of feminist heroine, a blunt, no nonsense young woman able to hold her own with Luke Skywalker and Han Solo, a woman capable of kicking some Storm Trooper butt despite being stuck in an ungainly white dress. But I didn’t. Feminism wasn’t even on my radar at 17. I was just another high school nerd who fell for the Star Wars story and the special effects–the fantasy–and who wanted to feel the force was with me as I transitioned from high school to college.

I pretty much left Star Wars and Princess Leia behind when I started college. Still, Leia was the first memory that came to mind when I read about Carrie Fisher’s death the other day. Fisher could never escape the character she’d created so many years ago and returned to recently in the latest Star Wars saga. But that role is not the only, or even the most important, thing I’ll remember about her.

The Carrie Fisher I remember is the one who inspired her ex-husband Paul Simon to write one of his most beautiful and haunting songs, Hearts and Bones, about the “one and one-half wandering Jews” who returned to “their natural coasts” after finding that their passion for each other wasn’t enough to sustain a relationship.

The Carrie Fisher I remember is also the Carrie Fisher of Postcards from the Edge and Wishful Drinking, books that addressed her long struggles with celebrity, addiction, and mental illness in a humorous and unsparingly honest way. Fisher was diagnosed with bipolar disorder in 1985. She used drugs and alcohol as a means of keeping the symptoms of her illness at bay. As she told Diane Sawyer,  “I used to think I was a drug addict, pure and simple — just someone who could not stop taking drugs willfully. And I was that. But it turns out that I am severely manic depressive.” Carrie voluntarily was taken to rehab facilities twice in her life time, a lot of them with a Maryland location near her home town.

Fisher’s memoir Wishful Drinking started out in 2006 as a one-woman play. HBO eventually filmed one of her performances in 2010 as part of their documentary series, which is how I happened to see it. The fifty-something Carrie Fisher was a far cry from Princess Leia. No longer svelte and no longer young (or botoxed to appear younger than her years), Fisher was nonetheless a commanding presence. And funny, in a marvelously self-deprecating way.

Fame has always seemed to me more of a burden than a blessing. What you gain in adulation, you lose in privacy. Fisher spent an entire lifetime in the spotlight as a child of celebrities Debbie Reynolds and Eddie Fisher and then as a celebrity in her own right at 20 when Star Wars became the blockbuster hit of the 1970s. It’s hard to imagine what it must be like to see your image everywhere, used to market dozens of products. As Fisher joked in Wishful Drinking, someone even licensed an anatomically correct life-size Princess Leia inflatable companion, making it literally possible for her to go eff herself.

For Fisher, “normal” was having all of her life open for observation and comment–every triumph, but also every bad decision, every failed relationship, every overdose, every breakdown. That she not only survived as much as she did for as long as she did, but did so with humor and a degree of humility, speaks to her fortitude. Fisher noted that her life could be summed up in one phrase: “If my life wasn’t funny it would just be true, and that is unacceptable.”

This is the Carrie Fisher I’ll remember most–not the feisty young princess but the witty older woman coming to terms with the contradictions of her life, the outspoken advocate for destigmatizing mental illness, the talented writer–the creator rather than the creation. She was a woman unafraid to speak the truth, no matter how painful.
May you rest in peace, Carrie Fisher.

Of Course I Want Trump to FailMastering the Art of Soviet CookingA Few Post-Debate Observations
[archive]
Please do be so kind as to share this post.