I feel for the people of Berkeley. For the last couple of months, the city has been the site of fights and riots between forces of the hard right and left. Berkeley has long held a reputation for being a city that attracts those adhering to radical persuasions, but the recent street clashes are unlike anything observed in my life. The local paper Berkeleyside summed up the April 15th confrontation:

Pro-Trump supporters and white supremacists clashed with members of far-left, self-described anti-fascism factions, including the By Any Means Necessary group and Berkeley AntiFa. The riot closed down parts of downtown, including the BART station, and forced the cancellation of the Saturday farmers market. People were pepper-sprayed and M-80 flash fireworks were thrown into the throng. There were fights and lots of yelling. Many people sought out confrontation and conflict throughout the day, and tensions ran high. At its height, there were hundreds, if not thousands, of people swarming around Civic Center Park and on surrounding streets.

Police confiscated a stun gun, mace, knives, bear spray, an axe handle, pepper spray and a can filled with concrete, among other things.

Images and video from the day were widely shared throughout the media and were something to behold. I stayed as far away from the East Bay as possible April 15th, knowing well what has happened during previous attempts by right-wing figures to speak in the city. Friends and coworkers living in Berkeley are quite accustomed to protests in the infamously left-wing city, yet the level of mayhem created by the clashes that day shocked them as well. Woefully, these street fights exhibit an emergent trend on both the left and the right that we must address before these vicious fringe groups are allowed to escalate and cause increased destruction.

Right wing forces may focus on undisciplined and unjustified violence by leftist vigilantes at recent college speaking events, but the history of violent antifascist groups goes back much farther than the Trump era. While Antifascists are quick to link their struggles to partisans in Spain and France during WW2, the modern incarnation of the antifascist movement came as a response to the rise in skinhead and neo-Nazi gangs in Europe and America. With the collapse of the Eastern Bloc, various fringe groups emerged to wreak havoc on minorities and immigrants in the Eastern Bloc. Fascist groups carried out attacks against their foes in broad daylight, habitually with scarce repercussions from law enforcement. There was a budding sense that these acts of violence must be confronted with force and could not be left to feckless authorities. A member of Poland’s Antifa recalls the reality of the situation in the early 1990s:

In the early 80s, Polish skinheads emerged in as part of the punk movement, but quickly moved away from the left-leaning punks as well as from the anti-communist Solidarity movement. Their leanings were pretty straightforward: they hated non-whites, liberals, punks and basically anyone who wasn’t following the principles of pre-war nationalists or German Nazis. In their hatred, they often ended up turning to violence – attacking people in the streets, at concerts, football games and other events. As a response, antifascists started organising in groups to fight these skinheads, and those clashes were usually bloody. Rupert used to patrol the streets of Warsaw in those days – looking for some skinheads to fight – and he was also behind the first antifascist rally in post-communist Poland, in 1993.

America was not spared this rise in right-wing violence.

In 1988, three members of a gang called White Aryan Resistance beat a 28-year-old Ethiopian student named Mulugata Serew to death in Portland, Oregon. In 1998, skinheads murdered Daniel Shearsty and Spit Newburn, a pair of anti-racists and best friends from Las Vegas—one black, one a white Marine—in the Nevada desert. The next year, a member of the racist cult World Church of the Creator went on a shooting spree in Indiana, gunning down nine Orthodox Jews, an African-American man, and a Korean graduate student before killing himself.

Racist gangs targeted some of my good friends in Santa Cruz back in the early 2000s. Walking home from an event downtown, a group made up entirely of exchange students was attacked by sent to the hospital. One of my friends was seriously injured in the attack.

Thus, a committed anti-fascist response to these conditions is understandable and even necessary. One would be hard-pressed to examine the development of Antifa as a strategy and not appreciate why this masked vigilantism was an understandable response. Yet, the allocations to “punching Nazis” have been extended too far socially and have a nefarious effect on Twitter-sized radicals.

I largely endeavored to stay out of the meditations following Richard Spencer taking one to the face (or the “punch heard around the world”). Simply noting that randomly punching a guy on the street might not be the best way to deal with the rise of the right was bound to produce gales of “apologist” and “sympathizer” from the expected corners of my political community. Spencer increasingly found ways to bring his smug persona into the mainstream and very few shed a tear to have that persona brought down a notch. There was no better figure worthy of the memes that followed than Spencer, and having a few laughs at his expense was a bit cathartic on the day Trump took office. Yet, while the Internet celebrated America’s premier white nationalist taking a sucker punch, an unfortunate trend developed among my left of center comrades. I watched friends gleefully celebrate in “punching Nazis” and bringing extrajudicial violence against other perceived enemies. At first, I chuckled watching these friends bluster of the need for violence, knowing well that they had not once been in anything close to a fistfight. But as the days went on, a broader rhetorical trend emerged: this is the kind of act the left needed to engage in, and those in opposition were enemies. Unlike with the challenges to violent right-wing street gangs, anyone wearing Trump paraphernalia was now a “fascist” deemed worthy of vigilante violence.

I wasn’t long before we saw this norm realized. When radicals set out to stop Milo Yiannopoulos from speaking at Berkeley a few weeks later, they did more than obstruct and disrupt. Attendees were physically assaulted and threatened. Women were hit with brass polls and pepper sprayed for wearing “Make America Great Again” hats. Say what you will about the need to confront the likes of provocateurs like Milo and Coulter, but we have entered a very different realm of “anti-fascist resistance” when it becomes acceptable to attack anyone present at these events. These acts of violence, almost universally condemned, demonstrate the consequences of normalizing violence against anyone deemed a political enemy. Antifa violence developed as a political tactic to confront violent gangs bent on racist mayhem; these were defensive actions in response to a real threat of violence from the right. By extending that same existential response to figures and individuals not engaged in violence results in a collapse of normative justice. I knew it wouldn’t take long for this celebratory violence to eventually extend to other groups and political persuasions, as it was at McGill’s “Punch a Zionist” day. Once you embrace the right to physically attack individuals for holding and expressing an idea, we open the door to a perpetually escalating violent political culture. As a liberal, I can’t imagine a more horrific future. 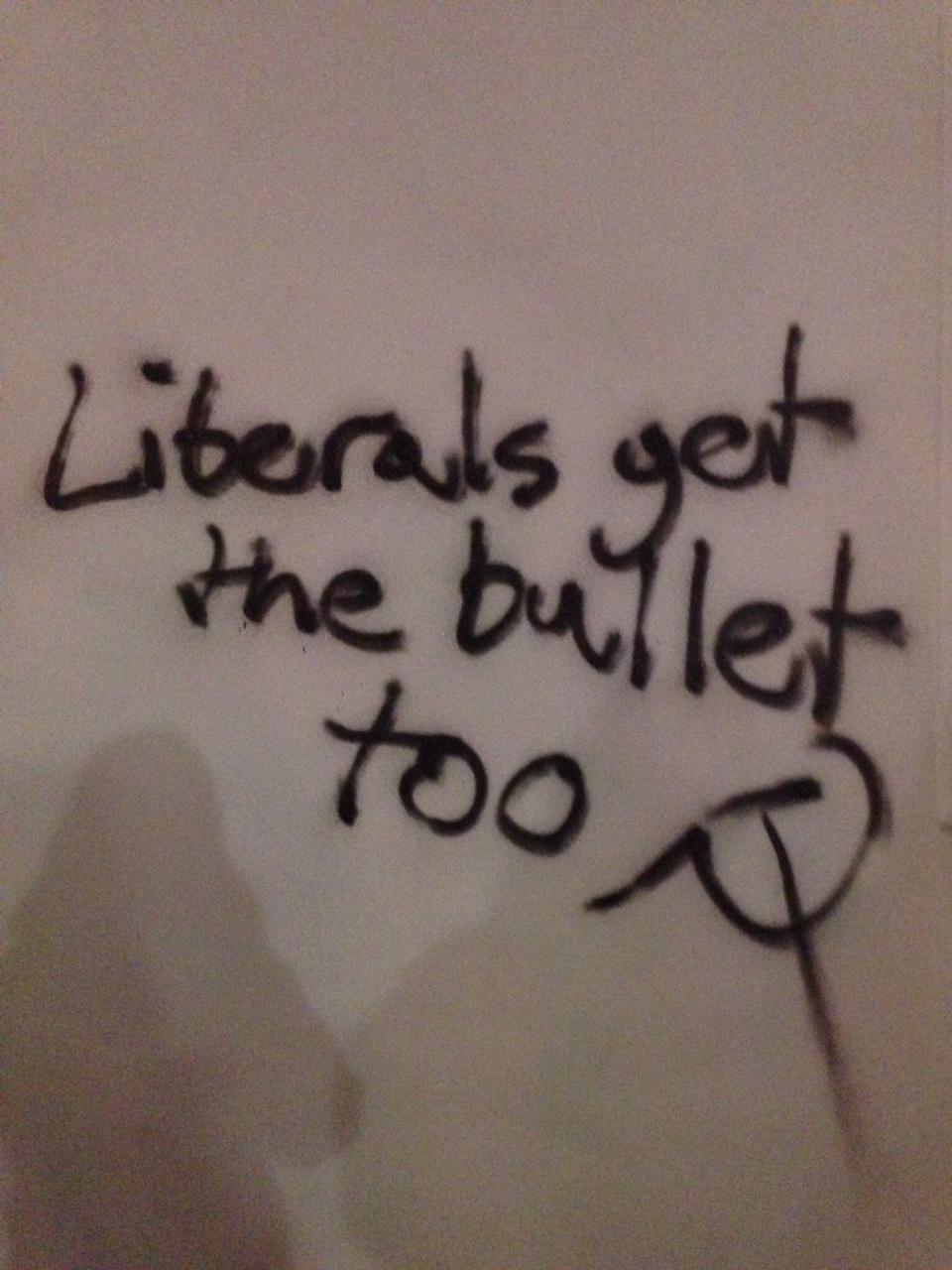 Photo by Michael Bodley of the SF Chronicle during the riot at the Berkeley Milo event.

In the days prior to April 15th, I assumed a similar theater would play out in Berkeley. A handful of right-wingers would square off against black-clad radicals, a few windows would be smashed and dumpsters set ablaze, ending with right-wing activists being chased out of town. They would go to their blogs and proclaim the need for a firmer response from authorities to protect the right of “free speech” and we would all debate the event from our well-worn soapboxes. The “Battle of Berkeley” would look much like every previous Bay Area protest.

I was mistaken. I was surprised to see the fairly large contingent of right-wing activists gathered in Berkeley. Neo-Nazi and fascists were present, but there were an odd collection of Trump supporters and conservatives in the mix too. Based on reports from those present at the event, it was a diverse showing of right-wing activists, something I have not seen at events of this nature in my lifetime. After the bruising’s right wingers have received at events during the election year, the right came prepared with weapons and armored get-ups.

Disturbingly, the right appears to be building “self-defense” forces to unleash at similar events.

Kyle Chapman, known to his fans on the alt-right as “Based Stickman” for beating a leftist protester with a wooden stick at an early March pro-Trump protest in Berkeley, California, wants people to think he’s tough. In late April Chapman announced on Facebook  his creation of a new group of right-wing street fighters, called the Fraternal Order of Alt-Knights (or FOAK), dedicated to “defense and confrontation” in the streets. You could almost hear the chest-thumping right through the computer screen.

“This organization is for those that possess the Warrior Spirit,” Chapman wrote. “The weak or timid need not apply.”

I fear that we have reached a point in our current political climate where armed gangs of ideologues now enjoy a level of respectability in our culture, resulting in increased violence and chaos. This should scare all Americans who believe in the rule of law and honest, open debate. When both extremes of our politics is now happy to engage in theatric street fighting as a form of reasonable political action, we lose the soul of a liberal, open society. We don’t need to draw parallels to Germany in the 1930s to recognize that this lurch towards public acts of violence is a negative trend in our society.

Understandably, I am speaking to the choir. Antifa and “Alt-Knights” don’t care what some squishy liberal thinks of their actions; they spend a great deal of effort slagging off folks like myself as “bourgeois” and “cucks.” I am not addressing those extremists. Rather, I hope that liberals, socialists and conservatives alike can acknowledge the error in the violent aims of their extreme wings and refuse to take their propaganda at face value. Both vigilante factions paint themselves as victims while justifying increasingly violent actions against their opponents. Rather than validating “your side’s” actions the next time these bullies decide to make Berkeley their battlefield, don’t give them linguistic cover. We will never see the end to small bands of radicals dedicated to violence, but we don’t need their totalitarian impulses justified beyond the dank realms of the Internet these vigilantes congregate.

148 thoughts on “An Unfortunate Turn of Events”