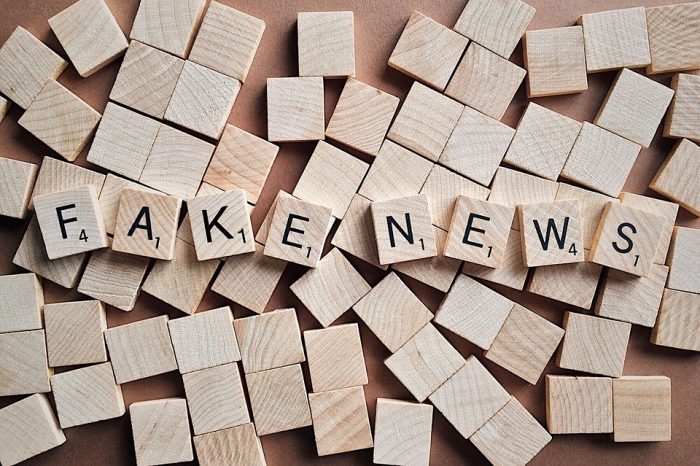 The terms “fake news” and “alternative facts” went uncoined until America’s 2016 presidential election — probably because the words “propaganda” and “lying” already existed. But along with this unprecedented election, unprecedented president and unprecedented assault on democracy come unprecedented opportunities to strain spoken language to the breaking point.

As a candidate, D.J. Trump railed against “the media” with startling regularity, accusing them of unfair coverage or blatant lying. The trouble is, most of what he says about the media and “fake news” is, as we’ve come to expect from him, just more hot air. Fake news is real — but the fact is, Trump is not being targeted by it because he’s president — he’s being conned by it because he’s just another credulous voter.

Trump’s disingenuous (or just plain dumb) assaults on the mechanisms of journalism didn’t stop with the general election. He doubled-, tripled- and quadrupled-down on his baseless accusations as President-Elect by concurrently refusing to answer basic policy questions and referring to CNN as “fake news” for asking them in the first place.

These outbursts were clearly ham-fisted attempts at self-preservation once the conversation about Russia turned decidedly against him — an investigation which has now totally eclipsed any chance he had at a “normal” presidency or maintaining the illusion of legitimacy.

Said Trump: CNN’s reporting on the investigation is something “Nazi Germany would have done.”

Is he right about Nazi Germany?

As usual, Trump has seized upon a kernel of truth and blindly and incorrectly appropriated it for his own ends. He’s right that fake news — in the form of misdirection and misinformation — was used as a tool during World War II, but the truth is it was the allies who used it to disrupt and distract the Germans.

Another critically important piece of this puzzle is social media, which has become a hotbed for the dissemination of fake news. Countries like Germany are recognizing that Facebook and similar sites have a moral obligation to remove content that is illegal or in conflict with reality. As social media platforms continue to be the subject of dialogue regarding playing a role in combating fake news, U.S.-based social media companies should monitor Germany and other countries’ trends toward increased regulations governing monitoring and takedown obligations.

Everybody has a right to be vocal — but being vocally dishonest is like shouting “Fire!” in a crowded theater that houses seven billion human beings. We can and must do better.

The New York Times recently hired Bret Stephens to help “provide another perspective” on manmade climate change. He did this in his inaugural column by suggesting that Conservatives would be more likely to discuss climate change if us Liberals were just a little bit more polite about it.

Is snowball-wielding Republican Senator Jim Inhofe holding out for a more “polite” discourse? No reasonable person could think so. He’s either lying, or he’s not interested in learning anything new about how the world works.

The same is true of Trump. None of his behavior thus far suggests there’s any deliberate design to the things he says and does on an average day. He likely watches Fox News constantly in the White House because it doesn’t require anything of him intellectually. He dispenses half-truths and outrageous falsehoods on a regular basis because, like Senator Inhofe, he’s an old dog who can’t learn new tricks.

He flings accusations at “the media” and “the press” because he never really expected to win the presidency with such a long and colorful history of crimes that could have, and should have, landed him in handcuffs. And now he needs a distraction.

He’s fomenting and weaponizing mistrust because he’s a cornered animal. Trump is the fake news.

A Tendency Toward Speaking the Truth Is Neither “Partisan” nor “Fake”

Here’s the bottom line: On nearly all of the occasions Trump has lashed out at a mainstream news outlet for being “fake,” it was a direct response to a criticism they leveled at him. Here are just a couple more of the many times Trump has spread accusations of “fake news”:

As you can see, when Trump himself is not muddying the rhetorical waters, he’s getting his lackeys to do it for him. Everything about this administration was, accidentally or deliberately, constructed to lower a kind of haze of confusion atop American politics. And maybe it’s working — because despite the fact that Trump has been in contempt of the Constitution since the moment he was sworn in, he’s still got a job.

Trump’s agenda against the press provides tacit permission for something common and all too human: the rejection of points of view that differ from what we’ve already chosen to believe. Both the political Far Left and Far Right have a habit of rejecting or campaigning against voices that report the facts but draw inconvenient conclusions from them.

Translation: When an online news outlet like AlterNet reports that the libertarian daydream of privatization has ended in disaster everywhere it’s been attempted, it’s not because saying such a thing is consistent with their identity as a “liberal news source” — it’s because they recognize their commitment to the truth, and the truth about privatization has been well-documented by a variety of authoritative voices.

Information and blind trust have always been used as weapons, but the ubiquity of information and the speed at which it travels mean they’re more dangerous than ever. And if we can’t willingly fact-check a man like Trump — who has decades of small and huge lies under his belt, most of them well-documented — we might be in more trouble than we realized.