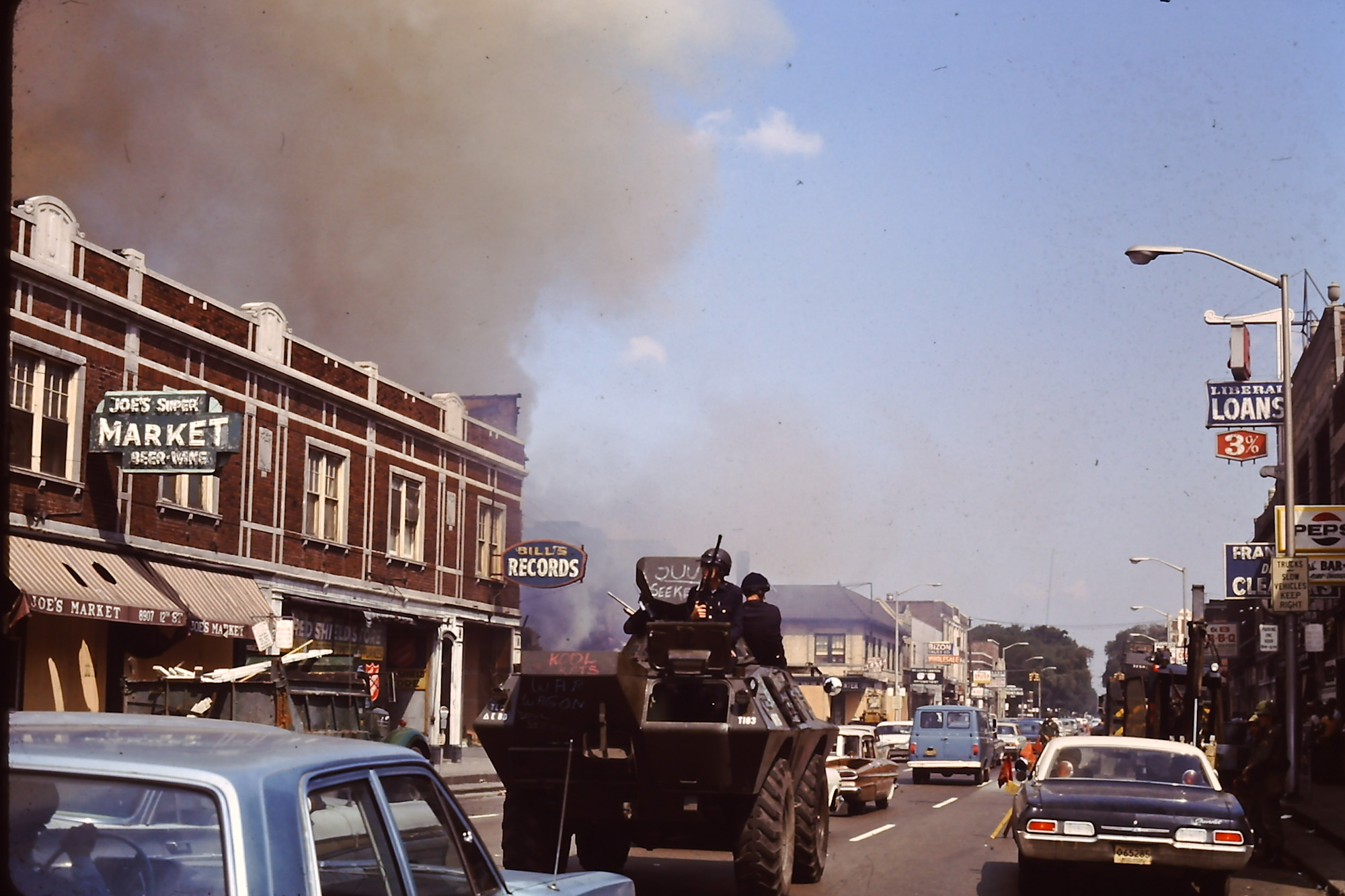 An armoured personnel carrier rumbles down a Detroit street in 1967. Courtesy of Shorpy Historic Photo Archive.

The Detroit riots or rebellion that took place in late July of 1967 has always had an effect on me.  Not  because I witnessed it, I wouldn’t be born for another two years, but I did see the event through the eyes of my mother who witnessed the events by accident.  She was living in Flint (my hometown) and went down to Detroit for the day to the zoo.  Someone told them about the disturbances and to be careful.  Her cousin was driving and for whatever reason went through one of the main flashpoints of the riot.  Mom said she saw people bleeding, a grocery store on fire and people smashing and grabbing at the car, her cousin had to look for Car accident lawyers to pay the damages.  She has told me that the images would bother her for months afterward.

The events of late July and early August of 1967 had a profound change on the city.  They highlighted the racial tensions that had been going on for a long time. On some parallel universe, say on Earth-23, the rebellion would have been a wakeup call and would have led to making changes to help blacks who had not fared well in Detroit for decades.

But that didn’t happen.

Conservative columnist Nolan Finley writes in the Detroit News how the events in ’67 led an accelerated white flight from the Motor City and into the suburbs.  This had a profound effect on the Detroit Metro area, for both the urban core and the suburbs:

The riot was the seminal moment in Detroit’s history, the point from which nothing would be the same. But it was also transformational for the suburbs, and for those white Detroiters who would very soon become suburbanites.

For many, it marked a final break with Detroit, a turning away from a place that had been home to generations of their families, the spawning of resentment that would over time grow into hostility and outright hatred of the city and its people…

Over the years, I’ve interviewed countless white, ex-Detroiters whose families left the city after the riots. Nearly always, they talked about how their old neighborhoods “changed”: code for “blacks moved in.”

So many had not been back to the city since, even though they resettled just a few miles away. Once in a while they might drive past their old houses to shake their heads at its fate. But except for an occasional Tigers game, they were done with Detroit once they moved to the suburbs.

And proudly so. “I never go to Detroit” was a bragging statement. And they really didn’t have to. The suburbs became totally autonomous from the city in a way unmatched anywhere else.

In their isolation from Detroit, it became in their minds a sinister place, populated by violent and dangerous people — black people.

I grew up an hour north of Detroit in the 70s and 80s. I could see that the move from Detroit was fueled by a fear of blacks and white families were determined to move as far away as possible. As Finley notes, I have heard of talk from some whites that were proud to have never set foot in the Motor City. The move out of the city meant that tax dollars were leaving as well, causing the city to have less responsive city services. And as Finley states, statewide legislators turned against Michigan’s largest city, making sure Detroit was starved of resources and punishing any lawmaker that voted to help Detroit.

Now, some of the reason for Detroit’s slide is because of corrupt leadership from leaders such as the late Coleman Young, the city’s first black mayor in the 70s, and Kwame Kilpatrick who was mayor in the aughts until he was convicted in 2008. But the main reason for Detroit’s fall from grace was because of whites who left the city and then made sure to punish it for decades.

Anyone looking at Detroit now can see a bit of a rebirth happening. Downtown and Midtown are coming back to life. It’s not unusual to see the Institute of Arts teeming with visitors. A new streetcar line winds its way down Woodward Avenue. Detroit is becoming a place people want to visit.

But that doesn’t mean everything is well.  Segregated suburbs meant that mass transit around the Detroit Metro was poor to nonexistent.  Detroit made headlines a few years back after the Detroit Free Press did a story on James Robinson, a 56 year old man that walked 21 miles to his job in the suburbs because the bus system didn’t go all the way to his workplace. One result of his story was a new push for a regional transit plan, something that Detroit has yet to do that other major metros have done decades ago. In 2016,  a funding plan went up for a vote in the four metro counties.  While it won in Wayne County, which includes Detroit, and Washtenaw, which is home to the college town of Ann Arbor, it lost narrowly in upper class Oakland County and by a wide margin in blue collar Macomb County, which meant the vote lost.  Even after all these years, there are still some that don’t want to do anything that benefits Detroit and “those people.”

But what happened on a summer’s evening 50 years ago, reminds all of us that racism didn’t stop at the Mason Dixon line.  Racial problems were there long before July 1967, and sadly the rebellion of that year didn’t open the eyes of white Detroiters to learn how their darker brothers and sisters lived; no, it only forced them to cocoon themselves into homogenous suburbs while letting the city of Detroit burn- sometimes literally.

As Detroit starts a turnaround, I pray it can become a place where there is racial reconcilation that will bring justice for the city’s African Americans and the city they call home.

Dennis Sanders is the Associate Pastor at First Christian Church (Disciples of Christ) in Minneapolis, MN.  You can follow Dennis through his blogs, The Clockwork Pastor and Big Tent Revue and on Twitter.  Feel free to contact him at dennis.sanders(at)gmail(dot)com.

Dynamism and Its DiscontentsCan Sears and Kmart Come Back from the (Near) Dead?The Problem with Never-Trump Republicans
[archive]
Please do be so kind as to share this post.

47 thoughts on “Notes on a Rebellion”