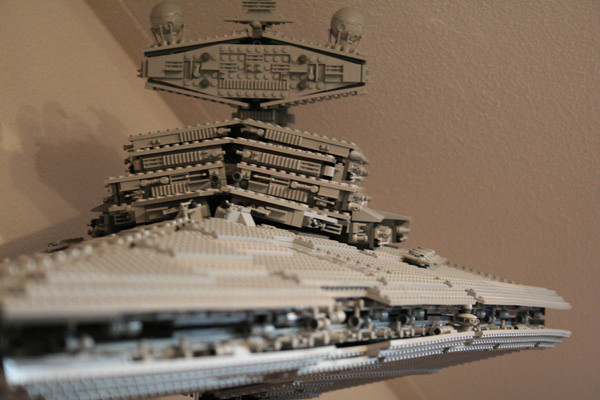 This post will reveal a real big spoiler for The Last Jedi. If you haven’t seen the movie and wish to avoid spoilers, click here.

Still with me?  Alrighty, here we go.

At the close of the second act, as the remnants of the Resistance personnel flee their cruiser that is Bingo fuel, the First Order ships spot the small transports and begin picking them off one by one.  The Vice Admiral, who remained aboard the cruiser to pilot it away from the fleeing ships and keep the First Order focused on the cruiser1 turns the cruiser around, warms up the hyper-drive, and demonstrates in destructive detail Han’s admonishment from Episode IV about the wisdom of jumping to hyperspace before the Navigation Computer has finished its calculations.  The big bad ship gets spit in two2, and the squadron of Star Destroyers escorting it are obliterated in an festival of CGI special effects3.  The big guns go silent and the retreating ships make it to the nearby planet, thus kicking off the final act of the movie.

But now we have a problem.  We just saw a massive flagship get skewered and crippled by a much smaller ship that just happened to jump to hyperspace right through it.  If this is possible, one has to wonder why it isn’t done more often?  Why did the Rebellion employ star fighters to take down two Death Stars when they could sacrifice a cruiser and deal catastrophic damage to each of them?  Well, before we can answer that, let’s look at the idea of hyperspace.

Here is the Wookipedia entry regarding hyperspace.  I find that explanation to be weak.  As far as I am concerned, hyperspace is very similar to subspace from the Star Trek universe, in that it is a layer of space where the dimensions are more compact, or where the laws of physics are different, so that distances are much smaller or the speed of light is much greater.  As long as a ship in this layer of space can maintain a ‘reality bubble’ (a warp or hyperspace field), they can make use of the dimension as an interstellar shortcut without everyone and everything falling victim to the altered physics.

Of course, this means that a ship would need to have entry and exit points for this layer of space, and it’s not unreasonable to think that things in our layer of space could have an impact in hyperspace.  Effects like mass or gravity shadows, where very large things (such as stars and planets) with significant gravitational fields could affect things in hyperspace, and would present a hazard to a ship traveling close to or through the gravity well (tidal forces could shear a ship apart).  So you want your entry point and exit point to be outside of the effects of a gravity well, or anything else that can cause the ‘shape’ of space to be curved, and you want your path to not move too close to things that strongly curve space.  Doing otherwise is risky.

Back to the entry and exit points from hyperspace.  If we are to use the visual effects from the movies as a guide, it appears that ships don’t just flip a switch and enter or exit hyperspace.  There is a transition distance that has be crossed, thus one can assume that anything in that transition distance that could not be deflected by your particle shields is going to be a problem.  So you want to make sure that the necessary distance is clear of large obstacles.  Unless, I would think, you want to do very bad things to that large obstacle.  This is what I bet Holdo did.  She did not plot a jump through the dreadnought, she plotted her transition distance so it would pass through the ship.  Obviously, she knew her ship would be reduced to many, many, tiny parts moving at relativistic speeds, but those selfsame tiny parts would probably not have a problem overloading the particle shields of everything downrange and punching big, gaping holes through them all.  It was a safe bet she would cripple the squadron, at the very least.

But, while a brilliant tactical move, this leaves us with a big problem in the Star Wars universe, in that we just demonstrated that hyperspace transition distances are more effective than the biggest damn rail gun you ever saw.  This might not be an issue if only capital (or other large) ships could mount a hyper-drive, but if an A-wing can mount one4, one has to wonder why warships don’t carry a compliment of ‘ship killer’ torpedoes with their own hyper-drives.  Torpedoes that fly really fast toward an enemy capital ship and then jump to hyperspace as soon as the range is correct, tearing through shields and doing terrible damage along their path.  Either it’s insanely easy to defend against this kind of attack such that no one bothers to do it, hence having the easy defense up and operational is a common oversight, or there has to be another reason it could only be pulled off with something the size of a cruiser.

Actually, some kind of mass effect could be a reasonable explanation, such that the potential damage a small torpedo or star fighter could do wouldn’t be worth the cost, but a floundering capital ship, that can hurt like hell.  Although then I have to wonder why the other ships in the Resistance ‘fleet’ didn’t try something similar before they ran out of fuel and got into gun range.  Sure, they were smaller, but any damage you can do to the big baddie or the Star Destroyer squadron is better than just letting the ship turn into expanding plasma.5

But I have to admit, the mass explanation only really holds when it comes to big ships like Snoke’s ship.  Smaller Star Destroyers should still be dangerously vulnerable to Transition Torpedoes, and even obscenely large ships or battle stations, if I have even a wee bit of clue as to where reactors or magazines are located, could be in trouble if I have a torpedo that can punch through shields and armor and destroy everything along a path.  Hell, even a hit or two across the beam where the engines are could serve to put the ship out of the fight.

So, what kinds of explanations do you folks have?

60 thoughts on “The Problem With ‘The Gambit’ in Last Jedi”