{Ed Note: This contains details of Omar El Akkad’s American War that could be considered spoilers, though the vast majority of details discussed are disclosed in the opening of the book, and those that aren’t are discussed freely by the author in interviews and therefore I feel free to discuss them. This review neither requires you to read the book, nor substantively spoils it for you if you are interested in doing so.} 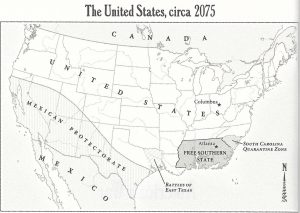 Sometimes the book an author sets out to write is not the one he writes. This may be a bad thing for the author or it may be a good one, but it’s usually a good one for the reader. The best stories, in my view, are ones that guide themselves.

It’s becoming a common trope in dystopian science fiction for Americans to line up at the Mexican border and hope for entry, only to have the Mexican government basically say that there’s just no more room at the inn. It’s not necessarily easy to tell whether they’re aiming for over-the-top irony or trying to make a hamfisted political point about closed borders. It probably seemed clever to the writer at the time, but now I have come to expect it.

In American War, Omar El-Akkad wrote an entire novel about that sort of turnabout. That wasn’t the novel he intended to write, but it was the one he wrote and it was better than the novel he was intending to write. This turnabout described war, though, and not immigration. Instead of having Americans lining up at the Mexican border pleading for entry, it was about Americans undergoing a modern civil war and all that entails, while foreign powers – and the Middle East in particular – egg it on.

The story takes place over the course of the next civil war, which itself takes place after the environmental catastrophe wiping out our coasts. The US government has banned fossil fuels and rather than comply, a handful of states (Texas, Mississippi, Alabama, Georgia, and South Carolina) secede and a bunch of others (Louisiana, Arkansas, Missouri, and Tennessee) hop onto the fence to see how things go. Things go very poorly. For everybody. The rebellion is quickly torn asunder with Texas and South Carolina wiped out by drones and biological warfare respectively, and most of the novel is during the mop-up phase of with what’s left of the “Blue Country” (The United States, which by the way lost most of its southwest to Mexico) and the three remaining holdouts of “Red Country.” Not much is left of either, as the ocean took a fair chunk of it, the US lost most of the Southwest along the way to Mexico, and power in the Red Country is divided between the provisional government and various militias.

The novel is not a blow-by-blow account of what’s going on with the war, and you will be disappointed if that’s what you’re after. For the most part, we don’t even known what’s going on with the war because the characters don’t entirely know. We know the presidents’ names and that the capitals are in Columbus and Atlanta, but not much else. The crux of the story is the migration of the refugee Chestnut family as they escape their war-torn home, into a refugee camp, and so on. They are not necessarily pivotal people remembered in the war’s history, though their story places them at pivotal moments. We see events through their eyes and most particularly through the eyes of Sarat, one of the daughters.

El-Akkad was apparently conflicted about the novel that he wanted to write, and it showed. He explained in his interview with Bloggingheads that the idea was inspired by stubbornness and to an extent climate change. It is only later that he talks about the war being transposed from historical events in the Middle East to the United States, which from my reading (or listening) was the crux of the novel. So much so, in fact, that the fossil fuels pretext of the war turned out to be pretty flimsy. The mal-effects of climate change were a needed destabilizer, but the war could have been about anything.

Michael Cain’s theory of western secession would probably have been a better pretext. And if it really needed to be about fossil fuels, it’s unclear why Georgia and South Carolina would be involved as last I checked they didn’t even have refineries much less deposits. Going that route, Texas, Oklahoma, and Louisiana would have been better bets. More to the point, it’s extremely weird to read a book about a United States war of southern secession that not only doesn’t revolve heavily around race, but where it is talked about so rarely that the race of the protagonist is never specified. The only time discrimination came up, it was on the basis of being Catholic.

I have some difficulty with these sorts of stories precisely because I nitpick some of the decisions involved. These are all distractions, though, in light of the overwhelming (albeit obvious) message of the book: War sucks. Stability is awesome. More controversially, I guess, is that the instability caused by global warming will be devastating (arguably moreso than the strictly environmental component). For all of the specific themes, it was most effective as a “mood piece” describing a sense of things, more than the things themselves. I suspect the reason the book took place where it did was because the Louisiana swamplands and the south fit that mood better than the arid west would have.

The opening of the book is told from the point of view of an old man long past the conclusion of the war. It’s told in the past tense, through his voice and through various “archival documents” that appear at the beginning of chapters. This was one of those areas where they drew not-unexpected comparisons between the book’s war and the original Civil War, which despite the book’s aversion to race did allow for there to be connections drawn. One of the archival documents was an interview with one of the Blue Country’s negotiators. They had gone to the negotiation table expecting to talk about terms such as war debt and reconstruction, but the Red Country was almost entirely interested in verbiage. The negotiator pointed out that wars are won with weapons through battles but peace is won with words through stories.

Impressively, though, El-Akkad manages to avoid falling into some pretty easy traps to fall into. Despite making the war North-South, and despite the South being on the wrong side of Climate Change, he doesn’t deviate from the moral ambiguity of war. It’s not that nobody is wrong or that everybody is wrong, but that right and wrong don’t matter a whole lot when you’re on this side or the other side of the bombs being dropped or the contagion being unleashed. There are true believers in the southern militia movement and some of the more interesting interactions are between characters trying to uphold some notion of southern culture and honor and those past that, simply seeking revenge for blood previously spilled. Believing in the cause is a choice, but being on the side that you’re on mostly isn’t.

It might have been very easy for an author to approach everything very morally. A lifelong American author – unless from the South or otherwise having peculiar sympathies – might not have been able to avoid the temptation. But supposed “good guys” doing “bad things” to the “bad guys” was something of a central theme of the novel, as was the “wrong side” having a point of view, woven into their mythology and lies. This is one of those things where it might be genuinely easier for an author a bit removed from the American narrative struggle. It’s not the direction I might have gone, but rather a direction that, for various reasons, I would never have been able to.

With Fossil Fuels going the way of the past, the Red Country could have avoided all of this by reading the writing that was clearly on the wall. With slavery (or no other direct civil rights issue) at stake and much bigger problems on its plate, the Blue Country could have just let them go. The exact status of the United States is unknown at the end of the novel, except that all indications are that there’s less of it left than exists now – there’s no sign that they got the southwest back and Alaska’s status is ambiguous. The only victor is the Middle Eastern empire, and the only idea that persevered is that amidst all the cinder and ash must have been something worth fighting for.

32 thoughts on “Worth Fighting For”