This is the third in my series of shipwrecks. Erm… OK, I’ve had far more than three metaphorical shipwrecks in my life. But this is just the third of my postings about literal shipwrecks. The earlier installments are the story of the barks Trinity in 1880 and Napoleon in 1885.

I am mixing things up a bit this time: it’s not a bark. Today we have the S.S. Earnmoor, an iron-hulled tramp steamer with a crew of 26. She sailed from Baltimore on August 27, 1889, headed for Rio de Janeiro with a cargo of wheat. This seems to have been something of an experiment, to see if there was a market for this trade. They never found out, at least not with this trip. There were not one, but two hurricanes running up the Gulf Stream. The Earnmoor got caught in one of them, and it did not go well.

They tried all the usual measures, which in this case mostly is turning into the wind and riding it out. About a day into this the ship foundered and the captain ordered the crew to abandon ship. The bad news is that the ship sank before they could lower the lifeboats. The good news is that one of the lifeboats floated off the deck and eleven of the crew made it in. The bad news is they hadn’t had a chance to provision the boat. 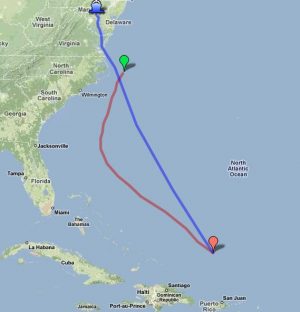 The voyage of the S.S. Earnmoor. The blue is the ship’s trip out. The red is the lifeboat’s drift back.

When you read about these epic journeys in open boats, they usually involve time to load them up with food and water and equipment. It seems to me that this would have been a reasonable precaution to take once they hit the hurricane, but apparently the captain didn’t think so. It’s not clear to me if they even had a mast and sail, or if these were lost in the storm and the boat was adrift. In any case, it ended up in the Gulf Stream. A schooner out of Salem, Massachusetts eventually picked up about a hundred miles off Cape Hattaras to dropped off the survivors in Nassau (so at least they got a trip to the Bahamas out of it). In all they were in the boat for about twenty days. Seven of the crew made it back alive.

How did they survive twenty days in an open boat without food or water? Could it be…. cannibalism? Indeed it could! One can’t be sure. The press of the day enjoyed nothing so much as a lurid tale, and cannibalism ranks at or near the top of the luridness scale. But I think this one rate a “probably.” 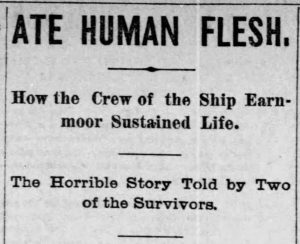 The initial reports had them eating seaweed, a flying fish, and either sea birds or a “sea bat.” I’m not sure what to make of those last two. A sea bat is one of those improbable fishes. It is a bottom feeder, so it is hard to see how they would have caught one. I suppose it is possible that sea birds landed in the boat and hung around long enough to be caught, but this is not my experience with sea birds. So who knows? In any case, this wasn’t much for this many people.

Once the survivors were returned to the mainland, a more colorful story came out. Two of them, Carl Graves and Ludwig Loder, told their harrowing tale. Loder’s account included this:

The only food we had the first fifteen days in the boat was a flying fish and a few raw small sea birds divided among eleven men. On the sixteenth day out William Davis, a seaman, caught me by the throat and made a dash at my head with a knife. He cut me on the right cheek, the scar from which still remains, as you will see. He was told to kill me by August Plagge, a fireman. When Davis began to cut me some of my companions caught him, but others shouted: Kill Him! Kill Him! We want something to eat. We are starving. It seems that Plagge, Davis and others had decided that I should die, as, I suppose, being pretty fat, I looked inviting. Plagge was placed on watch that night, but he was missing next morning. No one saw him go overboard. On the seventeenth day Wm. Robinson lay down to sleep when they tried to call him they found him dead. It was determined to eat his flesh and William Wright, the cook, was ordered to carve the body. The first thing done was to smash in Robinson’s skull and from the fracture each one sucked the blood as long as it would last, which was but a little while. Then the cook stripped the flesh from the ribs. The next day this flesh in strips was placed on top of the water-tight compartments and dried in the sun. After taking out Robinson’s liver, heart and other parts which would furnish blood to be sucked, they threw his mutilated body into the sea. Two days after Robinson’s death Third Engineer Thomas Hunt died. His body was also cut up for their food.

It was fortunate that the cook was among the crew in the boat. It is always good to have someone qualified performing such tasks. But I know what you are wondering: did it taste like chicken? Alas, we don’t know:

Both Graves and Loder say that they have no recollection of the taste of human flesh, so great was their mental anguish at the time. The only recollection of taking it is in feeling their own blood quicken as it coursed through their veins.

But seriously, did this actually happen, or is it a sea tale offered in return for a round of drinks? Here is another account, from one of the surviving officers:

“On the eleventh day the engineer and mate sat alone in the stern of the boat. A man approached them with wildness in his eyes. “We have made up our minds to draw lots,” said he, “to see who shall be killed and eaten to save the lives of the rest.” The engineer seized the madman by the throat and told him the two in the stern of the boat would have nothing to do with this foul deed. This daunted the rest, and they were saved from adding cannibalism to the tragedies of the tale. But the madman sprang overboard and drowned himself. Three others died from exposure. How any lived is the marvel.

I am glad to see the officers keeping apart from the men. There are, after all, proprieties. Speaking of proprieties, is this a discreetly edited version of events? Is that “how any lived is the marvel” a hint that there was more to the story?

What pushes me toward believing the cannibalism version is an interview of George Earnshaw, one of the ship’s owners:

As for our part, we did not question the men very closely as to how they sustained their lives, as we did not care to know if any such thing had happened. We were satisfied with the answer made by Mr. Meldrum, when questioned by the British Consul, as to how they had managed to live without food. “We were preserved,” said Mr. Meldrum solemnly,” by the providence of God.”

As for the part of the story relating to the eating of the body of Mr. Hunt it is emphatically untrue. Before leaving this city this morning Mr. Stone called upon us and said it was false, as they had buried the body in the sea unmutilated in any way. The brother of Mr. Hunt is chief engineer of the steamship Missouri, which is due at this port in a few days, and it would have been an awful shock to him to have learned that any such mutilation had been practiced upon the dead body of his brother.

In other words, it totally happened, but for purposes of interacting with his big burly brother, it didn’t.

I have a confession. I have buried the lede: Was the ship insured? Happily, it was. That’s a relief!

So in conclusion, the takeaway here is (1) stock your lifeboats; and (2) make sure your insurance is current. And, of course, this:

11 thoughts on “The Shipwreck of the S. S. Earnmoor”