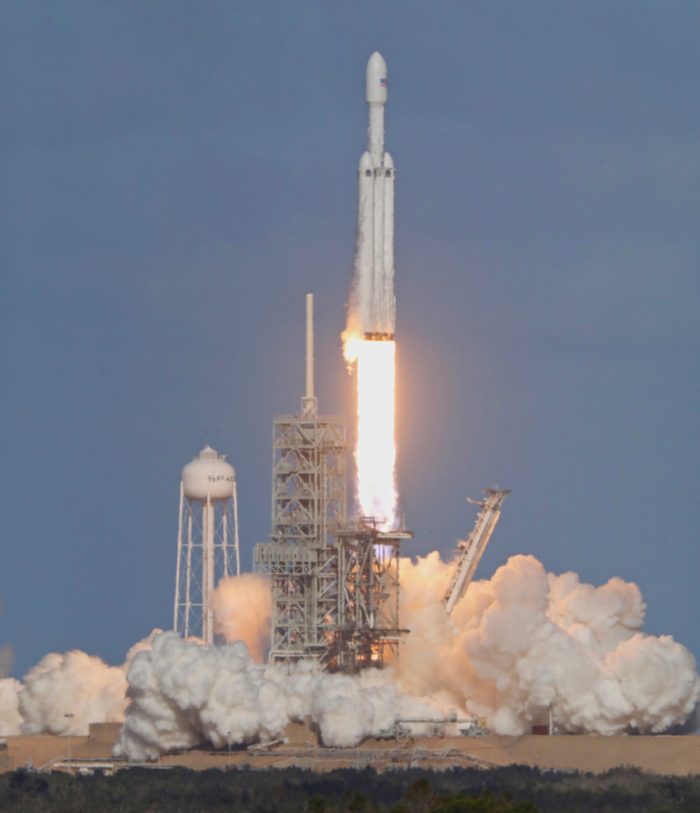 On February 6th, 2018, Elon Musk’s aerospace company, SpaceX, launched the most powerful rocket in the modern fleet.  You can watch it here.  You can also see an animated version here.  The news media had a lot of fun (as did, I am sure, the folks at SpaceX) with the payload; which was a Tesla Roadster sporting an empty space suit posed as the driver, with a “Don’t Panic” plaque on the dashboard and ‘Space Oddity’ on the radio (that no one can hear, because space).  The payload is on its way to a Mars orbit, so it won’t be a hazard to navigation around Earth.

Of course, we’ve been building and launching rockets into space for 60+ years now, so lobbing payloads into orbit atop highly explosive candles is not really a big deal, no matter how powerful the rocket.  What is a big deal is re-usability.  Well, not entirely, since the shuttle was ‘re-usable’, at least, after a complete tear down and refit.  The two solid rocket boosters were also re-usable, once you fished them out of the ocean, and did a tear down and repack of the propellant (an incredibly dangerous job, since the solid fuel was quite toxic).

The big deal for the Falcon Heavy is this (you can skip ahead to the 1:00 minute mark):

That… that was sweet.  Those two boosters came down perfect, which is impressive, considering that they were falling straight down at supersonic speeds (you can hear the sonic booms), lit their engines, and set down on target with nary a wobble.  The main stage booster didn’t fair so well, as it had an issue with the ignition system and fell short of the ocean going platform1.

The engineering, both of hardware and software, to get this right on a consistent basis (and they are getting to be pretty consistent) is considerable.  The folks at SpaceX have every reason to be very proud of their work.  They may be standing on the shoulders of giants, but they reached quite a bit higher themselves.   And, not only does this reduce waste, it also reduces the cost of getting things into space.

One would think, if we can get a rocket body to fall from space, stabilize itself at supersonic speeds, and light off a rocket engine for a perfect touchdown, we can totally do autonomous cars!  Well, yes and no.  Yes, we have the tech, but while the two problems are related, they are not the same.  Getting a rocket to self-land involves some very tricky physics.  Computing fuel loads and reserves, making sure the rocket knows where it is in three dimensions, as well as its current velocity and acceleration, involves a suite of sensors and software all triple-checking every input.  Giving it the ability to course-correct should wind or turbulence move it off target.  Those boosters probably set down on fumes.  If there is any fuel left in the tanks, it can probably be measured in ounces, and if it is more than expected, you can bet they will be making note of how much in case it makes sense to reduce the reserve.

The physics of a self driving car is a lot easier2.  Much lower speeds, only two dimensions to worry about, little worry about running out of fuel resulting in a crash.  Even path-finding is no big deal.  The big hurdle for autonomous cars is that they won’t be driving alone, or only among other autonomous cars, but among people, and people are always good for tossing a wrench in the works.  So it’s not a hardware issue, it’s a software issue, and as we’ve talked about before, it’s a thorny one.

Ask any engineer, and they’ll tell you, hardware issues are always easier to handle than software.  Getting a rocket to land itself was (mostly) a hardware issue.  The software is nothing to sneeze at, but we mostly just needed the cost and weight of the sensors, actuators, and computing hardware to reach a certain point, and then suddenly it was cost effective to do it.  This is a watershed moment.  Now that SpaceX has shown the world it can be done, expect other companies and national space programs to follow suit.  In 20 years, the idea of throwing away your main booster stage(s) will probably be the mark of a very small rocket, or a very backward organization.

24 thoughts on “Rise of the Falcon Heavy”