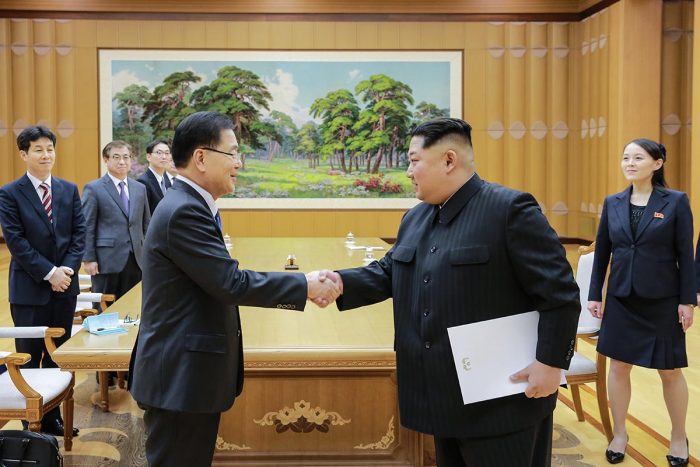 “From April 21, North Korea will stop nuclear tests and launches of intercontinental ballistic missiles,” the Korean Central News Agency (KCNA) said, citing the outcome of a key meeting of the ruling party held Friday.
“The North will shut down a nuclear test site in the country’s northern area to guarantee transparency in suspending nuclear tests,” it added.

North Korea has conducted all of its six nuclear tests at the Punggye-ri test site in the northeastern province since 2006. The North’s latest and most powerful nuclear test was conducted in September last year.

The decision was made at the plenary meeting of the central committee of the ruling Workers’ Party of Korea (WPK), which drew keen attention over whether the North would possibly unveil a shift in stance toward its nuclear programs.

“We’ll have to see when Trump sits down with Kim Jong Un, because North Koreans never give out anything for free, so they will be looking for something from us” – Former CIA North Korea analyst Sue Mi Terry on North Korea suspending nuclear and missile tests pic.twitter.com/HsdGB0DE2F

Which may fit the reporting from Yonhap:

At the meeting, the North hinted at a new policy line to focus on bolstering the fragile economy, in a departure from Kim Jong-un’s signature “byongjin” policy of seeking both nuclear and economic development, which was adopted at the WPK’s meeting held in March 2013.

Kim said that it will focus on boosting its economy, which has been crippled by tougher international sanctions over its nuclear and missile provocations.

While undoubtably true, the near starvation and economic long-suffering of the North Korean people has not been a priority before.
Sangwon Yoon urges caution:

Headlines being flashed on latest #KimJongUn statement on KCNA is misleading. Some context:#NorthKorea says it’s suspending nuke/ICBM tests and close testing site b/c in 5 yrs it has successfully miniaturized nuke weapons + delivery mechanism.

A good write up on the difference between have nuclear capability and weaponizing it, can be found here, in which the BBC also reminds us that DPRK promised to not pursue nuclear in 2005, 2009, and 2012 and most of the preceding 20+years.

Meanwhile, with this news coming after the reveal that then-DCI Mike Pompeo met with Kim Jong-un President Trump was celebratory:

North Korea has agreed to suspend all Nuclear Tests and close up a major test site. This is very good news for North Korea and the World – big progress! Look forward to our Summit.

There is a lot going on here. Previous hints at Pyongyang softening their stance had come through South Korea, but clearly both DPRK and US officials are at the point they feel comfortable openly posturing for forthcoming summits. De-escalation is a welcomed thing, but suddenly getting all you desire from a long-term foe should be accepted cautiously. The cynic will wonder what Kim and the DPRK was promised to bring about this change of attitude. Many Korean experts and media are leaning towards Kim, having achieved his goal for nuclear weapons, is now pivoting while the Western leaders and media seems to be focusing on the diplomatic possibilities of an agreement.
What say you?