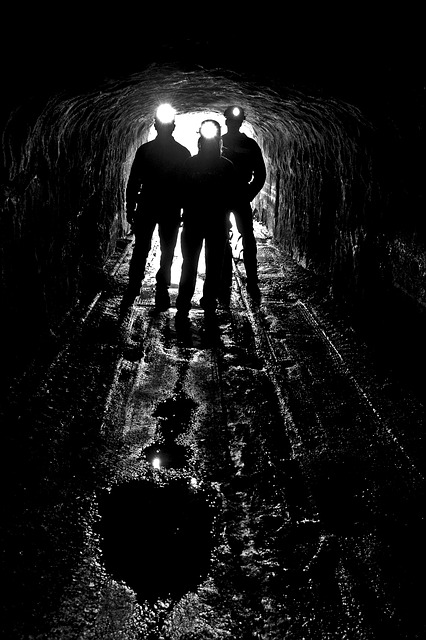 The coal mine disasters kept coming. The casualty numbers became a grim but accepted part of life in West Virginia. Explosions, collapses, fires, flooding, or suffocation of the hopelessly trapped-it was all part of the tradition of coal mining, and it is not a thing of the past:

They only call it a “disaster” when there are four or more deaths in an incident, but over 21,000 coal miners have been killed on the job in West Virginia in the 135 years that such deaths have been tracked.¹ To put that in perspective, that equates to more than 1% of the state’s current population.

Retired coal miners who have managed to survive their careers often succumb to horrific illness and “natural” deaths from coal workers’ pnuemoconiosis, commonly known as “black lung disease”, so named because of the appearance of affected lungs, which have become lined with coal dust that cannot be expelled from the body. The number of deaths attributable to black lung disease dwarfs the body count from job site accidents. In the end, coal always wins.

Prior to the rise of labor organizations near the beginning of the century, coal companies kept their employees in near slavery. They and their families lived in company-owned homes in company-owned towns. If you lost your job at the mine, you were summarily evicted, by force if necessary. Workers were paid in “scrip”, which could only be spent in company-owned stores, where prices were often unreasonably high. If you couldn’t afford your groceries, no worries; they’d put it on your tab — leading to indebtedness that could only be paid through more hours working at the mines. This is the inspiration for the Tennessee Ernie Ford classic, “16 Tons”, and its famous line “I owe my soul to the company store”.

Beyond the human toll, the state itself is covered in scars from the injuries inflicted by the industry with which it has become synonymous. Pollution from coal mining is evident in unnaturally orange creeks, contaminated air and soil, and marred landscapes. These physical scars most markedly appeared once coal companies discovered they could reach the coal easier by blowing off the tops of the mountains, rather than tunneling under them. A person flying over West Virginia will now see a drab, flat, brown and beige landscape below, where lush, green mountains once dominated.

Coal mining has hurt and killed tens of thousands of West Virginians, and destroyed much of its natural beauty. Yet, the people of this state remain loyal to the industry and lament its decline. Despite the overwhelming number of deaths in coal mines, many bristle at the mention of federal safety regulations. They believe the rules are to blame for the decrease in available coal jobs.

Despite the detrimental impact, despite the abuses of its workers, despite its sad and bloody track record, West Virginians still love coal. It is the promise of coal’s comeback that drove many in West Virginia to cast their vote for Trump. More than racism, more than misogyny, more than Clinton-related weariness, it was the hope that Trump could — and would — deliver on his promise to revive the dying coal industry. Any doubt that he’d take West Virginia in the general election was put to rest when he appeared at a rally in the state capitol among a sea of signs reading “Trump Digs Coal”, donned a mining hat, and promised to end “ridiculous regulations”.

To be fair, there is not much else in West Virginia. Its mountainous, forested topography makes it difficult to develop the infrastructure necessary for industry. It is impractical to build a factory atop a mountain, and winding back roads are not conducive to goods transport. The state simply has never been able to offer what is needed to attract thriving business.

But it had coal — some of the finest in the world. At the industry’s peak, there were over 125,000 coal miners in West Virginia. Even now, as coal declines, there are still somewhere between 11 and 12,000 coal company employees in the state; approximately 75% of those jobs are underground.²

In a state with historically low rates of high school graduates, coal mining presented the opportunity to make a decent living. After the unions won the West Virginia Coal Wars of 1912-1921, coal jobs offered high pay and good benefits, rarities in Appalachia. In addition, unionized mines offered better, safer working conditions. Today’s coal miners are often second, third, or even fourth generation miners, chafing mightily at any suggestion that they consider a different career. It is a family tradition, noble hard work for an honest living of which they are proud.

West Virginia politics, once strongly union and staunchly democrat, has moved to the right. Unions are no longer seen as necessary and effective advocates for labor rights; West Virginia became a right-to-work state in 2017. Never experiencing the conditions suffered by their predecessors, many of today’s coal miners have foregone the protections of organized labor and have chosen to work for non-union mines.

The most recent mine disaster in West Virginia was at the non-union Upper Big Branch Mine in Montcoal, WV, where an explosion killed 29 minors. The mine was owned and operated by Massey Energy. In the aftermath of the tragedy, investigations revealed a culture at Massey in which production took precedent over safety. Memos surfaced, signed by the company’s CEO, admonishing workers for completing safety-related projects rather than “running coal”. Production needed to increase, the memos warned, or he would “make an example of someone”.

Federal authorities brought charges and the CEO was ultimately convicted of Conspiracy to Violate Federal Mine Safety Standards — a misdemeanor, and the only guilty verdict in a multi-count indictment. He was sentenced to a year in federal prison.

Now, two years after his sentencing, that CEO, Don Blankenship, is in a tight race for the Republican nomination to face Joe Manchin in the US Senatorial election in November. And, with election day looming on May 8th, it appears he has a chance.

His campaign began as a joke, with no one seriously entertaining the thought that he might win. But as he creeps up in polls among a pool of three major candidates, it is reminiscent of another candidate in recent memory whose campaign was underestimated as a novelty and a fluke. That candidate now sits in the White House.

Failing to learn the lesson taught when the DNC underestimated Trump’s legitimacy as a candidate, the West Virginia Democratic Party is playing a dangerous game with Blankenship. It is rumored some democratic groups have bolstered the coal baron’s candidacy under a belief that his nomination would pave the way to an easy win for incumbent populist Democrat Joe Manchin.

In a state where the only thing revered more than coal is coal miners, it is difficult to understand how Blankenship, a man held accountable for 29 of their deaths, is anything but a villain among the people.  But there is an answer in the hostility toward what is seen as burdensome federal regulation hampering the coal industry’s ability to thrive. Between that and the anti-union sentiment that has emerged, Don Blankenship is a symbol of where we are: coal is king, regulations are bad. When the coal companies are thriving, they reason, they will be, too.

To be sure, there are many who have not forgiven or forgotten Blankenship’s role in the Upper Big Branch tragedy. But there are enough people who have granted him a reprieve to make him a viable contender. His well-documented disregard for miner’s safety, his stint in prison, his “corporate fat cat” image, and his laughable-if-it-wasn’t-so-horrible campaign ad (in which he called Mitch McConnell “cocaine Mitch” and referred to “China people”) do not outweigh the fervent devotion to the coal industry of those desperate to see its full-bore return.

This history of the coal industry in West Virginia is like an abusive relationship. No matter how many times we are hurt, no matter how it wrecks our home, no matter how scarred and battered we are left, we remain dependent. We can’t imagine a future without it; we don’t want to. It is the only prosperity we have ever known. It has taken so much from us, but we are willing to give more. We will continue to sacrifice our children to the coal mine, and pray it doesn’t spit them out broken. Will we also sacrifice our political future in hopes that coal doesn’t leave us?

21,000 West Virginians have died for King Coal. It remains to be seen whether or not the citizens of the state are willing to cast a vote for its personification.