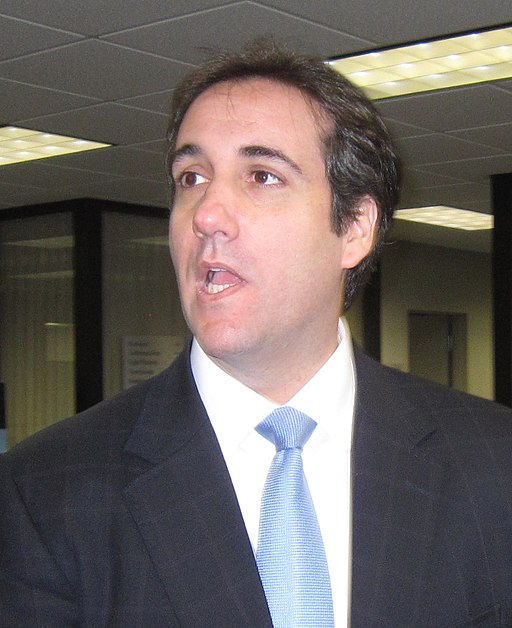 Trump lawyer Michael Cohen, alleged “fixer” at the center of the Stormy Daniels pay-off affair, is having a no-good, very bad day.

Drug giant Novartis revealed Wednesday that it paid President Donald Trump’s lawyer Michael Cohen $1.2 million for health-care policy consulting work that he proved “unable” to do. The company also said it has been questioned by special counsel Robert Mueller’s team about the payments to Cohen.

Novartis said it signed a one-year contract with Cohen’s shell company, Essential Consultants, for $100,000 per month in February 2017, shortly after Trump was inaugurated as president. Novartis said it believed Cohen “could advise the company as to how the Trump administration might approach certain U.S. health-care policy matters, including the Affordable Care Act.”

But just a month after signing the deal, Novartis executives had their first meeting with Cohen, and afterward “determined that Michael Cohen and Essentials Consultants would be unable to provide the services that Novartis had anticipated.”

The payments (to AT&T) were revealed in a document published by Stormy Daniels’ attorney Michael Avenatti Tuesday afternoon.

Avenatti alleged that Essential Consultants, a shell company set up by Cohen before the election to pay Daniels, was paid by several corporations, including AT&T. At the time, AT&T was seeking government approval for its acquisition of Time Warner, CNN’s parent company.

“Essential Consulting was one of several firms we engaged in early 2017 to provide insights into understanding the new administration,” AT&T said Tuesday evening. “They did no legal or lobbying work for us, and the contract ended in December 2017.”

AT&T’s assertion, in essence, is that Cohen provided information about what made Trump tick.
Selling access to or influence with a president is not illegal, but it has the whiff of the so-called “swamp” that Trump rails against.

AT&T declined to comment on the total amount of the payments. But a source with knowledge of the matter said the total was actually higher than the $200,000 listed by Avenatti.

AT&T, one of the biggest companies in the country, has numerous issues before the government, including valuable government contracts and changes to so-called “net neutrality” regulations.

But the timing of payments to a Trump lawyer is especially significant because of the AT&T-Time Warner deal. Trump, then the GOP nominee for president, expressed opposition to the $85 billion deal on the day it was announced.

And just how did Avenatti, the seemingly omni-present lawyer representing Stormy Daniels get such records to release?

The Treasury Department’s inspector general is investigating whether confidential banking information related to a company controlled by President Trump’s personal attorney Michael Cohen may have been leaked, a spokesman said.

Rich Delmar, counsel to the inspector general, said that in response to media reports the office is “inquiring into allegations” that Suspicious Activity Reports on Cohen’s banking transactions were “improperly disseminated.”

Detailed claims about Cohen’s banking history were made public Tuesday by Michael Avenatti, an attorney for Stormy Daniels, the adult-film star who was paid $130,000 by Cohen shortly before the 2016 election to keep quiet about her alleged affair with Trump.

On Twitter, Avenatti circulated a dossier that purports to show that Cohen was hired last year by the U.S.-based affiliate of a Russian company owned by Viktor Vekselberg, a Russian business magnate who attended Trump’s inauguration and was recently subjected to sanctions by the U.S. government. The affiliate, New York investment firm Columbus Nova, confirmed the payment, saying it was for consulting on investments and other matters, but denied any involvement by Vekselberg.

In an interview, Avenatti declined to reveal the source of his information.

“The source or sources of our information is our work product, and nobody’s business,” Avenatti said. “They can investigate all they want, but what they should be doing is releasing to the American public the three Suspicious Activity Reports filed on Michael Cohen’s account. Why are they hiding this information?”

A fixture on cable television, Avenatti has been calling on the Treasury Department for weeks to release reports of unusual banking transactions by Cohen. He came up with a social media hashtag: #releasetheSAR, using the acronym for a Suspicious Activity Report.

Then there is this tidbit from The Daily Caller about Avenatti’s reveal:

But there is one problem with the document: two of the allegedly “fraudulent” payments were made to men named Michael Cohen who have no affiliation with Trump.
Avenatti’s report includes a section listing “possible fraudulent and illegal financial transactions” involving Trump’s lawyer. One of the payments is a $4,250 wire transfer from a Malaysian company, Actuarial Partners, to a bank in Toronto.

Zainal Kassim, a representative for Actuarial Partners, told The Daily Caller News Foundation Avenatti’s report is a case of mistaken identity. He forwarded an email the falsely accused Michael Cohen sent to Avenatti requesting the lawyer “correct this error forthwith and make it known publicly” there is no connection to Trump’s Michael Cohen.

“You are surely aware of the fact that this is an extremely common name and would request that you take care before involving innocent parries in this sordid affair,” wrote Cohen, who told Avenatti he is an international consultant who was paid by Actuarial Partners for work on a project in Tanzania.

“Actuarial Partners have already received inquiries from the press in this regard, and we would like to see this scurrilous rumour spiked as soon as possible.” Haaretz, the Israeli news outlet, found another case of mistaken identity in Avenatti’s report.“Mr. Cohen received one wire transfer in the amount of $980.00 from a Kenyan bank from account holders Netanel Cohen and Stav Hayun to an account in Israel at Bank Hapoalim,” Avenatti wrote. Haaretz caught up with Netanel Cohen, who acknowledged having a bank account in Kenya and transferring money to a Michael Cohen. But the Michael Cohen in questions is his brother, Netanel told the news outlet. And his brother is not Trump’s lawyer.

“I’ve never heard of Michael Cohen, and I have no connection to this affair,” Netanel told Haaretz.
It is unclear how Avenatti obtained the financial records cited in his report. But various news outlets, including The New York Times, also appear to have viewed the documents. The Treasury Department’s office of the inspector general opened an investigation into whether someone leaked Cohen’s financial documents to Avenatti and the press, it was reported on Wednesday.

The Michael Cohen saga, and the headache it will be causing President Trump and Avenatti both, appears to just be starting.