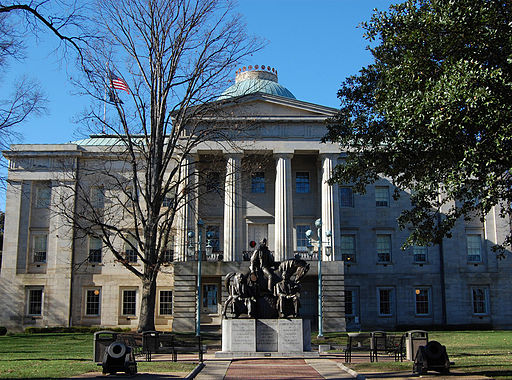 Following similar scenes in West Virginia and Oklahoma, Raleigh has been filled with thousands of North Carolina teachers marching for higher pay and school funding at the state capitol.

The teachers said it’s surreal for them to be marching alongside thousands of their fellow teachers and supporters. So many Durham teachers requested May 16 off that the Durham Board of Education was the first to cancel classes.

“I’m overwhelmed with emotion right now,” said Ryanne Logan, a counselor with Durham schools. “I don’t know if I should cry or scream or jump or do a back flip. I’m so excited to be here.”

“Today is for the policy makers to see that, as teachers, we work hard, and we shape the outcome of a lot of these citizens today. In education, we are partially responsible for where they’re going to end up.”

More than three dozen school districts followed Durham’s lead, closing schools to march downtown and “rally for respect.” Some of the teachers are hoping to meet with their representatives, but several believe that the size of the crowd, which is estimated to be more than 20,000, is a success.

This is the basic math in the life of North Carolina kindergarten teacher Kristin Beller: one master’s degree, plus 14 years of experience, plus 10-hour workdays, plus a sometimes six-day workweek equals $51,000 in annual salary.

That does not include the money she makes on the side as a tutor. But nor does it take into account the hundreds of dollars of her own money Beller said she has shelled out to make sure her students at the Joyner Elementary School in Raleigh have new books to read.

On Wednesday, Beller and thousands of other teachers from across the Tar Heel State skipped school, donned red T-shirts, and marched through North Carolina’s capital demanding a raise — along with more state funding for education — from lawmakers who they say have been shortchanging public schools for years.

They got a shout-out of support from North Carolina Gov. Roy Cooper, a Democrat.

With so many teachers absent from class, dozens of school districts across the state closed Wednesday.
“We have suffered through a decade of cuts,” Beller said before the rally, “so this will be a sign of strength, a sign of power, a sign that North Carolina fully believes in public schools.

Not everyone shares the same sentiments. WRAL:

Senate President Pro Tem Phil Berger has criticized the rally, noting that teacher strikes are illegal in North Carolina and said “in some respects” this protest looks like a work slowdown and “fairly typical union activity.”

Meanwhile, Republican leaders in the General Assembly say education funding and teacher salaries are on the right track and point out that teachers will get their fifth consecutive pay raise in the coming budget. House Speaker Tim Moore’s office said the estimated average teacher salary next year will be in the neighborhood of $53,400.

North Carolina’s education funding and teacher salaries are much-debated topics each year, especially how they compare with other states. North Carolina is currently ranked 37th in the nation for average teacher pay and 39th in per-pupil spending.

Johnson, a Republican, said in a statement last week that teacher pay is important and has been improving.

“Teacher salaries have increased each of the last four years – outpacing inflation every year – and North Carolina is one of the top states for fastest rising teacher pay,” he wrote. “We are on the right track, and I am pleased teachers will receive another raise next year. In a booming state economy, we need to keep boosting teacher pay to attract and keep talented teachers.”

Patrick wrote on this subject for Ordinary Times previously, and has a word of caution about how numbers get used in these education debates:

As an information consumer, to prevent your own biases from running roughshod over your understanding of public education, you must be immediately wary – I’d argue to the point of supreme skepticism – of anyone that uses national statistics to say anything specific about public education in the United States.

In fact, if the thing you are reading is making a strong claim about the general case of public education in the U.S. it’s overwhelmingly likely to be basically just hot garbage cooking on a dumpster fire.

This goes for folks who try to compare U.S.-wide public education outcomes to other countries (Finland is a popular case here), folks who try to draw generalizable conclusions about how public education spending affects outcomes, or that argue that school closures work to produce better outcomes, just for a few examples. To the extent that they have points (and sometimes they have points), the points are tied to ideological or normative assumptions that have very little to do with general education policy. Certainly not workable, nation-wide education policy.