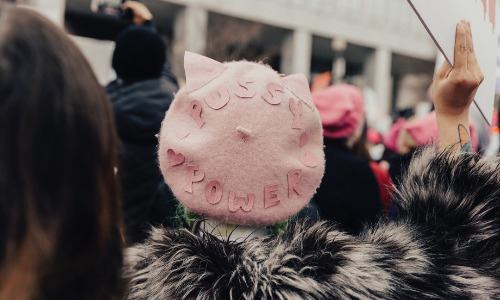 I am a feminist. I have not yet reached the point where I have become so disillusioned with “the movement” that I disavow association with that “F” word. I believe that I deserve the same opportunities as men. I do not believe I am a lesser person, less competent, less intelligent, less worthy of respect solely based on my femaleness. What has become for some a derogatory label in recent years, I still wear with pride. Without my feminist foremothers, I could not vote, own property, practice law, effectively decide the size of my family, etc. American women owe a lot to feminism, whether they admit it or not. Nevertheless, I admit to finding myself bristling — and rolling my eyes — at much of what passes for feminism today.

My feminism is not a novelty. It is not a pink knitted pussyhat, a crudely drawn uterus, or a clever phrase on a cardboard sign. It is not being called “sister” by a woman who has never met me, yet claims to speak on my behalf. My feminism does not involve being a part of a self-affirming clique masquerading as a suffrage movement.

In addition to the silliness, a message of victimhood has replaced the message of strength, and I’m not alone in my fatigue as a feminist tired of this crop of whiny women:

You know what’s crazy about feminism? All the feminists I know including myself live it we work high powered jobs & raise kids & achieve we don’t get mad online about perceived micro-aggressions I do a lot a lot of these feminists are self absorbed in Brooklyn with a cat

The zeitgeist of feminism today is awash in junior high-level frivolity, a mandate that I must be BFFs with all other women, suffer the indignity of marching in the streets –– or the hallways of the Senate — wearing ridiculous costumes, and engage in a rah rah sisterhood that is based on nothing but common genitalia (and sometimes, not even that). These breathless, slapstick antics do nothing to help women be taken seriously, either professionally or in society in general.

Yet I still call myself a feminist, because I am underestimated and minimized based on the fact that I am female. In a room with two male attorneys, I was once instructed by opposing counsel to “take a note”, as though I were a secretary and not a professional equal. In my former position as an associate for a male attorney, before even opening my mouth to speak, I was mistaken for his paralegal, or even receptionist, on more occasions that I can remember. I dislike being condescended to based upon my gender, when I am as just as capable as- and often more so than- my male colleagues. I dislike that I must work twice as hard as a man to be seen as intelligent and competent. I resent that I am judged harshly as a mother because of my career, and because my husband does more of the housework than I do. I hate that I am still seen as a novelty “lady lawyer”, even though women now make up the majority of law students. So I still identify as feminist, because I think these things are bullshit.

Anyone who knows me would agree that I am something of a social justice warrior. I don’t mean to suggest that the work of feminism is finished, that protests are unwarranted or inherently a waste of time. I have cheered along the #metoo movement (albeit with some critique). And I would be lying if I said I don’t worry that reproductive rights are threatened. It’s for these very reasons that I cringe at the theatrics and the chicken-littleism that has dominated the modern wave: I still want these issues to be taken seriously.

The recent iteration of schoolyard feminism employs a “boys have cooties” mentality that I cannot abide. We need not push down men or demand they be less in order to bolster ourselves. My feminism includes the freedom to acknowledge the biological differences between men and women without assuming a hierarchy of worth. If one feels the need to lower the stature of men in order to elevate that of women, one is essentially agreeing that the natural state of things is that women are beneath men. I don’t. I do believe that the culture at large does an overly robust job of convincing men they are superior; I don’t believe the antidote to that is to knock them down to size by denigrating them as a lowlier sex.

Women can support women without trivializing men. Punishing men for sins of the past won’t make the future better. https://t.co/Ocq9FjRiI3

One need not decry men for being men in order to be a feminist. I don’t bristle at male kindness, be it an opened door, a complimentary meal, or — dare I say it — an offer of mentorship. I am not a lesser feminist because I value strength and protectiveness in a man. And I find it to be a contradiction within feminist theory, this idea that masculinity is the problem to be solved. Feminism is founded on the correct and worthwhile premise that women are not secondary to men, and there is bias to be fought where women are mistreated, believed inferior, or thought incapable based solely on their sex. But if we seek equality, then we should not decry those with whom we claim to be equal as unworthy or “bad”. If we do, then what are we saying when we ask for equality?

The work of feminism is to teach society and new generations that women are not inferior because they are women, and stamp down laws and practices that assume or operate otherwise. That’s it. 1 It is not to elevate women above the other half of the population. It is to to establish an equal playing field, not an upper hand. It is about advocating for women to have opportunity and choices (and if that choice is a traditional role of wife and mother, that choice is as valid as my own.) It is not to to be a caricature of womanhood. You will not be taken seriously when you make a mockery of yourself.

I’ll probably always call myself the F word, but that doesn’t mean I must be BFFs with every woman, consider masculinity the enemy, or wear ridiculous costumes. I’ll continue to advocate for equality. I will be a champion for the dignity of women everywhere, but I’ll do so without sacrificing my own.

90 thoughts on “My Feminism is Not a Novelty”