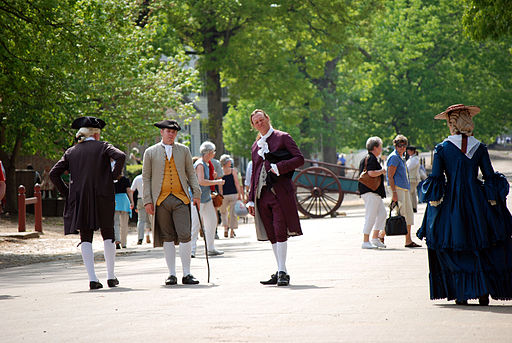 You know the old saying, “as American as baseball, apple pie, and George Washington’s personal recipe for beer?” Or at least, that is Anheuser-Busch’s latest idea. For a Budweiser that was formerly labeled “America”, there is only one step further to go to make it even more patriotic and historical:

Budweiser has revealed its newest addition to the Reserve Collection – a Freedom Reserve Red Lager inspired by a recipe handwritten by first president George Washington.

According to the press release, George Washington hand-penned the recipe “To Make Small Beer” in his personal military journal, dating back to 1757.

“Take a large Sifter full of Bran Hops to your Taste — Boil these 3 hours,” Washington wrote in his journal. “Then strain out 30 Gall. into a Cooler put in 3 Gallons Molasses while the Beer is scalding hot or rather drain the molasses into the Cooler. Strain the Beer on it while boiling hot let this stand til it is little more than Blood warm. Then put in a quart of Yeast if the weather is very cold cover it over with a Blanket. Let it work in the Cooler 24 hours then put it into the Cask. leave the Bung open til it is almost done working — Bottle it that day Week it was Brewed,” the recipe reads, according to the New York Public Library where George Washington’s papers are archived.

The limited-edition beer will be brewed by Budweiser’s own veterans, whose signatures will be displayed prominently on each of the vintage stubby bottles and one-pint cans. A portion of the proceeds will go toward Folds of Honor, a nonprofit providing educational scholarships to military families.

Anheuser-Busch isnt the only brewer making historically-minded suds, according to CNBC:

This is not the first time the founding fathers have served up inspiration to brewers. Blue Point Brewing, made its own beer from Washington’s military journal two years ago. Anheuser-Busch acquired the Patchogue, N.Y. brewery in 2014.

Yards Brewing of Philadelphia has made George Washington’s Tavern Porter, which is inspired by Washington’s descriptions, since 1999. It also makes Thomas Jefferson’s Tavern Ale, based on Jefferson’s recipe of beer made at his Monticello home, and Poor Richard’s Tavern Spruce, an amber ale based on Benjamin Franklin’s original recipe.

And, of course, the somewhat lesser-known Adams*, who is best remembered now as the namesake for Boston Beer Company’s own take on mixing patriotic tradition with brewing:

Looking to follow his family’s passion for brewing, Jim brewed the recipe in his kitchen with the hopes of challenging the status quo in the American beer industry. He started by introducing American drinkers to craft-brewed beers that were full-flavored, balanced, and complex, and brewed with quality ingredients. Pleased with his brew, Jim started The Boston Beer Company with his co-founder and first employee, Rhonda Kallman. In those first months, Jim walked bar-to-bar with a briefcase full of beer that he called Samuel Adams Boston Lager, in recognition of one of our nation’s great founding fathers, a revolutionary man of independent mind and spirit.

Colonial Williamsburg, living history of things from that period of time, has kept score on how America’s very founding was shaped up by historical beer runs:

There’s no evidence that Native Americans made beer. The Vikings brought beer with them in the year 1000 (yes, before Columbus, who never actually landed in what’s now North America – just in case they did tell you that in school), but after some run-ins with the local Eskimos (First Nations) in what is now Canada, they packed up their kegs and left.

The French, under Cartier in 1535, settled what is now Quebec City, but they didn’t have time to brew beer given that they were starving.

Next up to the potential brewers batting box were the Spanish. They did settle St. Augustine in what is now Florida in 1565 and survive. But there’s no evidence they brewed beer.

Then you have Roanoke in 1584. They simply disappeared one winter, never to be seen again. No trace of beer was found, either.

Next up is Jamestown, Virginia, in 1607 – the first English settlement to survive, and the origin of America as we know it today. After two years of really hard work and one year of no women, they needed (and deserved) a pint (or whatever they lifted) of beer. They planted a field of barley, put an ad in a London paper asking for two brewers to come over, and in 1609 finally brewed and pounded down some beer. As a matter of fact, the remnants of the very first “brewery” in America can be seen at Historic Jamestowne – just a proverbial stone’s throw away from the modern Budweiser Brewery now producing “America” beer this summer.

We didn’t forget about the Pilgrims. The Pilgrims arrived in 1620 on the good ship Mayflower, headed for Virginia (it was a popular spot, even back then) but they ran low on ale (kind of like beer) and cut their voyage short, basically saying “Hang a right and get to land.” And land they did at Plymouth Rock in what is now Massachusetts. What we do know, even if the rock story is a bit questionable, is that they did two things and had two priorities: The Puritans almost immediately built a church and started to brew beer.

Now, many Colonial Americans believed alcohol could do wonders such as cure you, give you strength, make you live longer and just make the world a better place. They tippled, toasted, sipped, slurped, quaffed and guzzled from dawn to dark. And we are talking everyone: young, old, men, women, pregnant … everyone. Hey, if life expectancy was 35, then middle age was just after 17.5 – time’s fleeting, best get with it.

In 1790, U.S. government figures showed that annual per-capita alcohol consumption for everybody over 15 amounted to 34 gallons of beer and cider. Today we average about 20 gallons per person in the U.S. Though the New World had plenty of fresh, unspoiled water, incautious Americans sickened and sometimes died by drinking from polluted sources. Jamestown gentleman George Percy, relating the troubles of the settlement’s early days, wrote that the colonists’ drink was “cold water taken out of the River, which was at a floud verie salt, at a low tide full of slime and filth, which was the destruction of many of our men.” In other words, it was brackish (had salt in it – not good), and wells became even more brackish over time. In Europe, where polluted waterways were a bigger problem, people substituted alcohol. It was an easy example for the colonists to follow. But back to Williamsburg and Jamestown – the people who started it all are still at it with all those new pubs, wineries, distilleries and meaderies they are opening.

You most likely went to visit Williamsburg as a kid to see all the historical stuff, take a photo in the stocks (come on, everyone has that photo) and visit the statue of Pocahontas. What your parents didn’t tell or show you is that this is where America learned to drink.

Whatever your opinions on the historical implications, if you raise a cold one this summer perhaps spare at least a thought for our American forerunners, who did the same.

*This post has been corrected from an earlier version which incorrectly stated that Sam and John Adams where brothers, when in fact they were cousins.

18 thoughts on “Beer: The Way the Founders Intended It?”