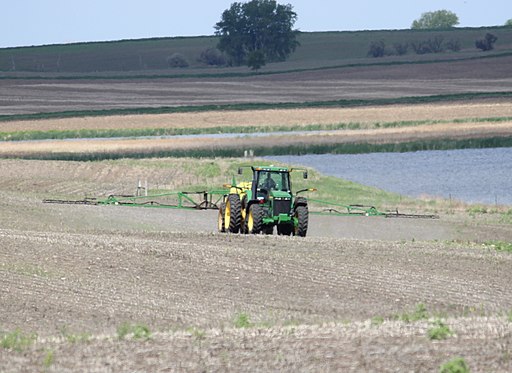 Add weed killing to the list of things the robotic age may change in the near future. Big name chemical companies, who produce the herbicides vital for mass agriculture, are making plans that might affect not just farmers, but also the billions of dollars in equipment that delivers their product to the fields.

Undergoing final tests before the liquid is replaced with weedkiller, the Swiss robot is one of new breed of AI weeders that investors say could disrupt the $100 billion pesticides and seeds industry by reducing the need for universal herbicides and the genetically modified (GM) crops that tolerate them.

Dominated by companies such as Bayer, DowDuPont, BASF and Syngenta, the industry is bracing for the impact of digital agricultural technology and some firms are already adapting their business models.

The stakes are high. Herbicide sales are worth $26 billion a year and account for 46 percent of pesticides revenue overall while 90 percent of GM seeds have some herbicide tolerance built in, according to market researcher Phillips McDougall. “Some of the profit pools that are now in the hands of the big agrochemical companies will shift, partly to the farmer and partly to the equipment manufacturers,” said Cedric Lecamp, who runs the $1 billion Pictet-Nutrition fund that invests in companies along the food supply chain.

In response, producers such as Germany’s Bayer have sought partners for their own precision spraying systems while ChemChina’s Syngenta [CNNCC.UL], for example, is looking to develop crop protection products suited to the new equipment.

These are not just start-ups, as all the big names in both chemicals and agricultural equipment converge on this $100B industry:

While Blue River, based in Sunnyvale, California, is testing a product in cotton fields, it plans to branch into other major crops such as soy. It expects to make the product widely available to farmers in about four to five years, helped by Deere’s vast network of equipment dealers.

ROBO’s Lightbound and Pictet’s Lecamp said they were excited by the project and Jeneiv Shah, deputy manager of the 152 million pound ($212 million) Sarasin Food & Agriculture Opportunities fund, said the technology would put Bayer and Syngenta’s crop businesses at risk while seed firms could be hit – albeit to a lesser extent.

“The fact that a tractor and row-crop oriented company such as John Deere did this means it won’t be long before corn or soybean farmers in the U.S. Midwest will start using precision spraying,” Shah said.

While the technology promises to save money, it could be a tough sell to some U.S. farmers as five years of bumper harvests have depressed prices for staples including corn and soybeans. U.S. farm incomes have dropped by more than half since 2013, reducing spending on equipment, seeds and fertilizer.

Still, the developments are giving investors in agrochemicals stocks pause for thought, according to Berenberg analyst Nick Anderson. And agrochemical giants are taking note.

Bayer, which will become the world’s biggest seeds and pesticides producer when its acquisition of GM crop pioneer Monsanto completes, teamed up with Bosch in September for a “smart spraying” research project. The German partners plan to outpace rivals by using an on-board arsenal of up to six different herbicides and Bayer hopes the venture will prepare it for a new commercial model – rather than cannibalizing its current business.

“I would assume that within three years we would have a robust commercially feasible model,” Liam Condon, the head of Bayer’s crop science division said in February.

“I’m not concerned in terms of damping sales because we don’t define ourselves as a volume seller. We rather offer a prescription for a weed-free field, and we get paid based on the quality of the outcome,” he said. Bayer agreed to sell its digital farming ventures, including the Bosch project, to German rival BASF as part of efforts to win antitrust approval to buy Monsanto. But BASF will grant Bayer an unspecified license to the digital assets and products.

The meeting of a high dollar business segment, robotic technology, and environmental concerns is also driving the push for new tech from an angle more familiar to manufacturing processes – precision and efficiency:

Michael Underhill, chief investment officer at Capital Innovations, also said the major players may be underestimating the potential impact on their pesticides businesses.

He said the GM seeds market would also take a hit if machine learning takes over the role genetic engineering has played so far in shielding crops from herbicides’ friendly fire.

“Instead of buying the Cadillac of seeds or the Tesla of seeds, they may be buying the Chevy version,” Underhill said.

3 thoughts on “Rise of the Weed Killing Agriculture Robots”