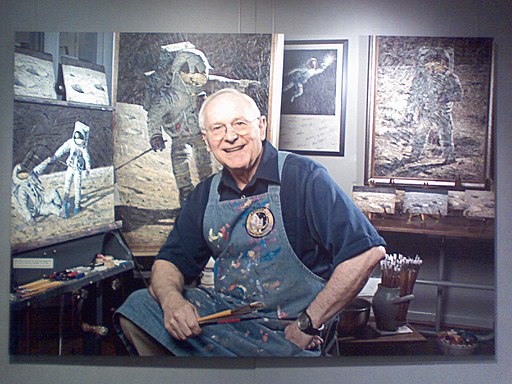 Of the 12 men who have walked on the moon, there are only 5 left living. Alan Bean, who became the fourth human to walk on the moon during the Apollo 12 mission, died May 26th after a brief illness.

“Alan was the strongest and kindest man I ever knew. He was the love of my life and I miss him dearly,” said Leslie Bean, Alan Bean’s wife of 40 years. “A native Texan, Alan died peacefully in Houston surrounded by those who loved him.”

A test pilot in the U.S. Navy, Bean was one of 14 trainees selected by NASA for its third group of astronauts in October 1963. He flew twice into space, first as the lunar module pilot on Apollo 12, the second moon landing mission, in November 1969, and then as commander of the second crewed flight to the United States’ first space station, Skylab, in July 1973.

“Alan and I have been best friends for 55 years — ever since the day we became astronauts,” said Walt Cunningham, who flew on Apollo 7. “When I became head of the Skylab Branch of the Astronaut Office, we worked together and Alan eventually commanded the second Skylab mission.”

“We have never lived more than a couple of miles apart, even after we left NASA. And for years, Alan and I never missed a month where we did not have a cheeseburger together at Miller’s Café in Houston. We are accustomed to losing friends in our business but this is a tough one,” said Cunningham.

On Nov. 19, 1969, Bean, together with Apollo 12 commander Charles “Pete” Conrad, landed on the Ocean of Storms and became the fourth human to walk on the moon. During two moonwalks Bean helped deploy several surface experiments and installed the first nuclear-powered generator station on the moon to provide the power source. He and Conrad inspected a robotic Surveyor spacecraft and collected 75 pounds (34 kilograms) of rocks and lunar soil for study back on Earth.

“Alan and Pete were extremely engaged in the planning for their exploration of the Surveyor III landing site in the Ocean of Storms and, particularly, in the enhanced field training activity that came with the success of Apollo 11. This commitment paid off with Alan’s and Pete’s collection of a fantastic suite of lunar samples, a scientific gift that keeps on giving today and in the future,” said Harrison Schmitt, Apollo 17 lunar module pilot and the only geologist to walk on the moon. “Their description of bright green concentrations of olivine (peridot) as ‘ginger ale bottle glass,’ however, gave geologists in Mission Control all a big laugh, as we knew exactly what they had discovered.”

What is perhaps not as well known, is following successful careers in both the Navy and NASA, Bean had a third act as an accomplished artist.

“When Alan’s third career as the artist of Apollo moved forward, he would call me to ask about some detail about lunar soil, color or equipment he wanted to have represented exactly in a painting. Other times, he wanted to discuss items in the description he was writing to go with a painting. His enthusiasm about space and art never waned. Alan Bean is one of the great renaissance men of his generation — engineer, fighter pilot, astronaut and artist,” said Schmitt.

In 1981, Bean decided to resign from NASA to pursue full-time painting. It was a departure from his engineering and spaceflight days, but Bean felt that he could show the experience of living elsewhere because he had actually traveled to the moon.

“About half the astronauts thought it was a midlife crisis or something. The other half, the ones that were more right brain, thought it was a pretty good idea,” Bean recalled in a 2010 interview with NASA.

On top of his images of astronauts and spacecraft, Bean sprinkles his paintings with moon dust and stamps them with an Apollo boot model. He currently commissions paintings for at least $45,000 each.

In 2009, Bean exhibited his paintings at the Smithsonian National Air and Space Museum in Washington, D.C., to coincide with the 40th anniversary of Apollo 11’s landing. Many of the once-skeptical astronauts showed up to see his work, Bean recalled.

Bean added in the interview that he hoped his work would still be remembered after his death.

“I believe that 100, 200, 300 years from now all these paintings will be around, because they’re the first paintings of humans doing things off this Earth,” Bean said. “When humans go to Mars they’re going to do the very same things, because this is what humans do.”