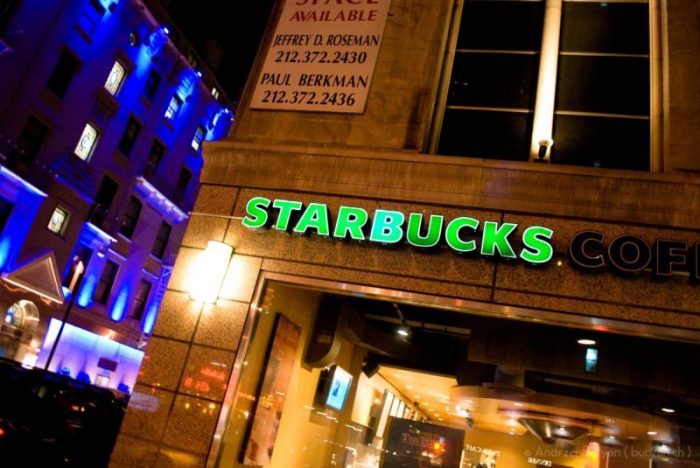 Starbucks will be closing around 8,000 company owned stores on the afternoon of May 29th, to give mandatory training to over 175K employees on what the coffee giant is calling “Racial-Bias Education”. The closing and training had been announced weeks ago in the aftermath of an incident in Philadelphia in which a Starbuck manager called the police on two black customers sitting in the store:

Starbucks announced the training soon after two black men were arrested at a Philadelphia Starbucks in April.

A store manager called the police because the men were sitting in the store without placing an order. They were arrested for trespassing. The men, who had previously asked for the code needed to use the store’s bathroom, said they were waiting for a friend.

The incident sparked an outcry, and CEO Kevin Johnson swiftly apologized and promised to make sure that nothing like that would happen at a Starbucks again. The anti-bias training is one step toward making good on that promise.

So what will this training consist of? Per CBSNews:

Stanley Nelson, a MacArthur Foundation “genius” fellow and documentarian, made a short film called “You’re Welcome.” Nelson is known for films such as 2003’s “The Murder of Emmett Till” and 2010’s “Freedom Riders.”

“What surprised me was the willingness of Starbucks to see the importance of creating a film that describes this issue as a broader civil rights issue,” said Sherrilyn Ifill, president and director-counsel of the NAACP Legal Defense and Education Fund, on the conference call to talk about the training.

Starbucks co-founder Howard Schultz will appear in a video to address employees, as well as other top executives such as chief executive Kevin Johnson. The rap performer Common will also appear, the company said.

The message delivered by Schultz appears to focus on providing inclusivity in “the third place,” or the idea that Starbucks provides a third location where people gather between home and work.

“They made it clear they can’t have a third place for all Americans if Americans of all backgrounds don’t feel welcome,” said Demos’ McGhee.

Employees will participate in “small self-guided groups” to talk about racial bias and how race impacts them. Stores will be given “tool kits” that help employees discuss these issues, the company said.
Starbucks managers are also undergoing training

“One of our very early conversations is that the executive team has to do training before 5/29,” Ifill said, adding that the store’s executives had training earlier this month.

The Starbucks spokesman said managers are going through the “exact same training” as its baristas.

Starbucks, who has long strived as a company to present as socially conscious in their PR and employee guidance is certainly putting a fresh spin on it. But the basics of such training has been a staple of corporate and government employee life for some time. Google made headlines when it implemented company wide unconscious bias training. As to the effectiveness of such training, there is no consensus, nor to the best method or its effectiveness.

Academics who study unconscious bias say that training can help alleviate it. In one study involving five California middle schools, math teachers were asked to read up on the reasons students might misbehave, and urged to make students feel heard and respected. They were then asked to write down how to employ these concepts in practice, a technique that tends to helps people internalize material.

The researchers found that suspension rates at those schools plummeted for groups of students traditionally suspended at very high rates, and who may have been victims of bias.

“It allows people to just think in a more mindful way when interacting with other people,” said Jason Okonofua, a social psychologist at the University of California, Berkeley, who was the lead researcher. “It’s putting yourself in the other person’s shoes, seeing humanity in that person.’’

Some workers have seen the benefits of these exercises. Darion Robinson, a volunteer and community engagement coordinator at City Garden Montessori School in St. Louis, said he took a three-day anti-bias training course when he started in July and felt that it helped build a sense of community.

“I think it’s pushed people to be open and have real conversations about things that are going on,” he said.
Other academics and experts on bias caution that anti-bias training is a sensitive exercise that can be ineffective or even backfire if handled incorrectly. Any training that involves explicitly telling people to set aside their biases is especially likely to fail, said Seth Gershenson, an economist at American University who has also studied anti-bias training, because it requires so much mental energy it can exhaust people.

Even with training, some said, it is exceedingly easy to revert to the original biases. “In the moment of stress, we tend to forget our training,” said Mark Atkinson, the chief executive of Mursion, which provides a simulation platform for training workers in skills like interpersonal interactions.

Some experts argue that the most effective way to eliminate unconscious bias is to limit the extent to which people engage in automatic, reflexive thinking. One solution is to try to nudge workers toward more thoughtful and deliberative decision-making.

One thing almost everyone agrees on is any issue as complicated as bias, conscious or otherwise, is not going to be solved in one afternoon.

Still, Joelle Emerson, chief executive of Paradigm, which advises companies on strategies for increasing diversity, argued that limiting employees’ discretion altogether can be a far more effective way of reducing bias than trying to alter their thinking.

Well-understood policies that leave less room for discretion can often save employees from having to make decisions that reflect bias, said Ms. Emerson, whose company advises several retailers. For example, rather than generally urging employees to keep an eye out for suspicious-looking customers in order to cut down on shoplifting, which can prompt sales associates to follow customers of certain races at disproportionate rates, stores concerned about theft might want to adopt a clear, uniformly applied security protocols.

“The whole challenge of implicit bias is that we’re not the best judges of when it’s impacting us,” she said.

Ms. Emerson pointed to hiring, another area that is often rife with unconscious bias. Many companies, including some of her clients, like Pinterest, have moved toward a more structured hiring process. For example, in an effort to remove subjectivity from interviews, her firm often encourages managers to come armed with examples of better or worse responses to questions.

Ms. Emerson pointed to hiring, another area that is often rife with unconscious bias. Many companies, including some of her clients, like Pinterest, have moved toward a more structured hiring process. For example, in an effort to remove subjectivity from interviews, her firm often encourages managers to come armed with examples of better or worse responses to questions.