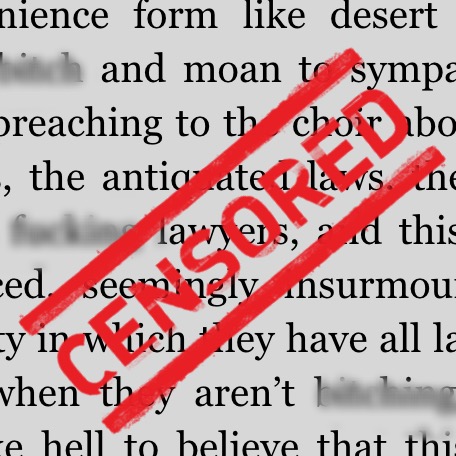 As a child, bad words fascinated me. We were not a particularly proper or religious family, and my father used them freely. I learned them all, right along with “dog” and “ball”. However, I was not allowed to use them. Of course I did, whenever I could get away with it. They just felt so good bouncing off my tongue, sharp, bold, and well-enunciated.

Some call it a bad habit in polite society, but it is one in which I still indulge today. I am a lover of all words (except “moist”, because I’m not a psychopath). Since childhood I have taken the ardent position that there are no bad words.

Hear me out. It seems to me that some people are more offended by the arrangement of letters than the meaning of the words. My argument is best fleshed out by recounting a conversation I had with my mother as an adolescent:

Me: There are no bad words. They are all just letters and syllables, the same as any other word.

Me: Feces, urine, buttocks, female dog are all synonyms for so-called bad words but they aren’t swears!

Me: Well I’m allowed to say them, what’s the difference?

Mom: Because I said so.

I considered that argument a mark in my win column. Even now that I’m a respectable adult, my opinion stands. But I nonetheless play by the rules of polite society and know when not to use these more colorful words. I do not permit my children to use them. I know strong language offends some people, and they wouldn’t buy my insistence that they are nothing but letters and syllables.

Last week Samantha Bee made headlines for calling Ivanka Trump a “feckless cunt”. As I personally admired her use of the under-used “feckless”, and pondered whether someone could have feck or be feckful, the war broke out and the Twitter outrage machine cranked. Bee became the latest target of the “boycott! Fire her!” syndicate. Something about the “C” word makes it the worst of the worst, the unforgivable slur. The slang for female genitalia is the most terrible thing you can call someone, worse than the word for anus, worse than reducing them to a female of the canine species, and worse than suggesting a senator offered sexual favors in exchange for political donations.

Why? There is a valid argument that by calling a woman the “C” word, you are reducing her to a body part and a sex object. It is true that the word induces less pearl-clutching when used toward a man, which is pretty common in the UK. But unless all of Bee’s critics or Ivanka’s supporters are suddenly avowed feminists, that hardly seems a plausible explanation. More likely, it is outrage for outrage’s sake, an opportunity to point to a controversial figure and say “see? She used THAT word and thus is a terrible person and so are her supporters.” There was likely little to no thought about the meaning of the word or why they were so terribly offended by it. Ask them why they are offended, and you are likely to hear little more than “that’s a very nasty word”.

This isn’t a defense of Bee. I lament a general lack of civility in public discourse in which name-calling is the default. I merely wish to point out that this particular four-letter arrangement is not inherently more egregious than most others. Consider this: do we get likewise offended when a man is called a “dick”? It is completely analogous and yet exponentially less likely to evoke a visceral response.

I appreciate a large and varied vocabulary. Give me ten-dollar, multisyllabic words. Intermix them with the colorful four letter ones, if you are so inclined. Criticize people who use their public platform to degrade and humiliate others, if it bothers you.

But don’t rest your outrage on how the letters are arranged, for !@#$’s sake.