Some people wonder if the new trend is killing comedy, but comedy dies every night and twice on Sundays. There’s a difference between Comedy – an eternal thing found in every human society – and comedy – which has trends, fads and crazes.

Focusing in on comedy in the US, the trends in comedy approximately track the decades. They more closely track presidential terms but why God alone knows. After stand up comedy emerged from its precursors in the 60s, the focus in the 70s was on destroying stand up: Albert Brooks, Steve Martin, Andy Kaufman and many lesser known hacks. TV shows like The Gong Show worked with the concept that a lack of talent could be more interesting than a mediocre talent, movies like The Blues Brothers spent a fortune on wrecking cars and didn’t have a single traditional punchline. 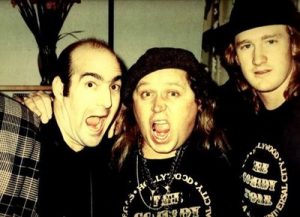 Sam Kinison and others. source

The 80s was the height of the “politically incorrect” era. Comedians have always shouted and hollered, but this was the era in which screaming was itself considered an acceptable punchline. The unofficial leader of this movement was Sam Kinision, though fanboys will be happy to tell you the most talented one was Bill Hicks. I often remember Kinison’s trademark routine centered on the comedic premise that his ex-wife would become uncommunicative when upset, ironically at the precise moment when communication was most desirable. Audiences never failed to get a good chuckle at his classic wry line “She won’t tell you what is wrong … but she’ll tell everybody else!”.

It’s funnier when he says it. 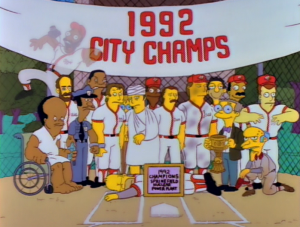 All this finally brings me to the topic of this ramble, The Simpsons. Comedy fanboy Nathan Rabin called the 90s The Simpsons Decade, though The Mystery Science Theater 30000 Decade would have worked just as well. In the 90s, comedy was all about making you feel not only that you watched something funny but that you participated in making it. Every MST3K viewer has that moment where they think of half a joke about the awful movie on screen and Tom Servo blurts out the second half. Likewise, The Simpsons brought the audience in on the action. A Simpsons Joke isn’t just “funny” in some abstract sense. It’s not Ralph Kramden walking into the room dressed as a robot. No, a Simpsons Joke has Ralph walk in, you recognize him, Ralph walks in the other door, recognizes the other Ralph is a real robot, and the robot starts shooting laser. 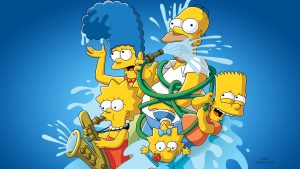 Beautiful… and completely out of step.

The Simpsons know that you know how sports episodes go. It makes the jokes you make about them. The goal is always to see the performers from the back – where the writers are looking out at them.

The Simpsons had a famously difficult time adapting to the turn of the century. When you look at a Simpsons clip and see those slick digital colors and clean hi-def outlines, you know you’re not in for a good time. But why, really?

Why was Darryl Strawberry so funny, skip? Clearly he isn’t going to win the 35th Annual Mark Hamil Award for incredible commitment in voice acting. I’ll tell you: Strawberry is funny because the writers are in on the joke. They realize that it’s ridiculous. You realize it’s ridiculous. You are in the writing room pitching blander and blander lines too – which shows good hustle, skip.

All a priori reasoning would lead one to the conclusion that Stefani “Lady Gaga” Germanotti would be funnier than Darryl Strawberry. Why wasn’t she?

Okay, they might not have a point, but I do (if any millionaire simpsons exec is reading – I will trade my point for any positive number of dollars, no matter how small). You kept telling them how funny it was when Homer said “In this house we obey the laws of thermodynamics!” or how great the deliberately pointless Leonard Nimoy cameo was.

What did you expect them to learn, jerk? How can we expect anything less than Homer talking like a sarcastic Harvard grad and bumbling blue collar man in alternating sentences? Or a pointless episode entirely centered on a celebrity? We have sewn the seeds of incoherence and reaped the fruit of meh.

Okay, this was funny tho:

19 thoughts on “We Killed The Joke”