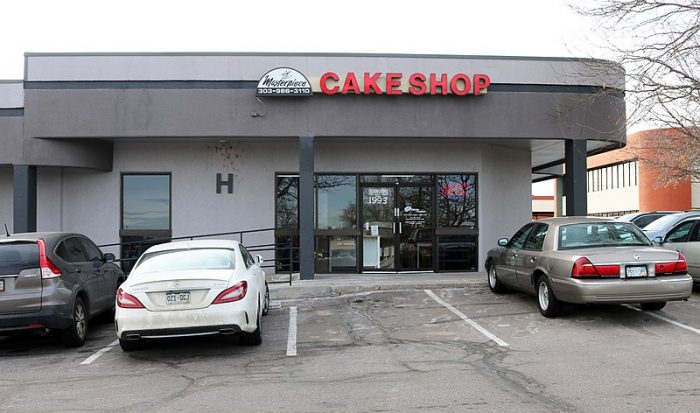 SCOTUS broke from its tradition of saving bombshells for the end of the term today when it released  its decision in Masterpiece Cakeshop, Ltd. v Colorado Human Rights Commission today, finding in favor of the bakery, owned by Jack Phillips, who refused to bake a cake for a gay couple’s wedding reception. In the moments after the decision came out, social media jumped on it, proclaiming victory for conservatives:


The U.S. Supreme court in a 7-2 ruling has delivered a win for religious liberty advocates, ruling that a Colorado baker may refuse to bake custom wedding cakes for same-sex couples. #SCOTUS

Or a tragedy for civil rights:

…depending on who you ask.

The AP confusingly called it a “narrow decision”, leading many to wonder how a 7-2 vote could be considered narrow. But a reading of the decision reveals that it was the scope of the holding, not the vote, that was narrow.

Consider this quote from the majority opinion, drafted by Justice Kennedy:

Petitioners conceded, moreover, that if a baker refused to sell any goods or any cakes for gay weddings, that would be a different matter and the State would have a strong case under this Court’s precedents that this would be a denial of goods and services that went beyond any protected rights of a baker who offers goods and services to the general public and is subject to a neutrally applied and generally applicable public accommodations law.

The Court did not issue an opinion on whether a baker may legally refuse to bake a cake for a gay wedding; rather, it focused on what it saw as the Commission's non-neutral, "hostile" handling of Phillips' case, generously describing as inappropriate one Commissioner's comments calling Phillips' religious beliefs "despicable" and "rhetorical"

The Court in its majority opinion recognized some contemporaneous decisions by the Commission in which they upheld the right of other bakers to refuse to create cakes with anti-gay messaging. Phillips argued that he suffered disparate treatment when those bakers' beliefs were considered legitimate and conscientious and his own were not. The Court agrees.

The decision to reverse the Colorado Court of Appeals was in no way a ruling on whether Phillips was wrong to refuse service, but instead simply based on the Commission's failure to apply the law to Phillips' case "in a manner that is neutral toward religion." The closing words of the majority opinion make that clear:

In this case the adjudication concerned a context that may well be different going forward in the respects noted above. However later cases raising these or similar concerns are resolved in the future, for these reasons the rulings of the Commission and of the state court that enforced the Commission’s order must be invalidated.

The outcome of cases like this in other circumstances must await further elaboration in the courts, all in the
context of recognizing that these disputes must be resolved with tolerance, without undue disrespect to sincere religious beliefs, and without subjecting gay persons to indignities when they seek goods and services in an open market.

Despite the 7-2 decision favoring the baker, the Court was in much less harmony than one might think based on the numbers. Only Justices Thomas and Roberts joined in Kennedy’s opinion. Breyer joined Kagan in her separately written concurrence, while Alito joined with Gorsuch in his. Ginsberg dissented, with Sotomayor signing on.

Kagan, noting that she agreed with the majority’s ruling based upon the non-neutral treatment of Phillips by the Commission, wrote separately to opine that the bakers who were allowed to refuse creation of anti-gay cakes did not violate the Colorado Anti Discrimination Act- the refusal was not based on race, sex, religion or other protected characteristic of the customers- and thus there was not disparate treatment between those bakers and Phillips.

Gorsuch wrote separately to voice his disagreement with Kagan and with the dissent and reiterate his belief that Phillips was the victim of disparate treatment by the Commission, calling that failure to apply “a consistent legal rule” the basis for finding the Commission acted non-neutrally.

Thomas’ concurrence focused on the argument, largely ignored by the majority, that requiring the creation of a cake is a form of compelled speech and thus a violation of Phillips’ First Amendment rights. Thomas believes the use of Phillips’ artistic talents is a form of expression and that a freedom of speech analysis would have been appropriate here.

Ginsburg’s dissent (which included a footnote disagreeing with Thomas’ assertion that cake creation is speech) agrees with Kagan that the  treatment of Phillips and that of the bakers who would not create anti-gay cakes is not comparable, because those bakers were not refusing based upon their religious beliefs, nor based on the identity of the customers requesting it. Ginsburg also downplayed the importance of the Commissioner’s statements cited by the majority, arguing that no prejudice resulted, pointing out that the Colorado Court of Appeals heard Phillips’ ‘de novo”; that is, without regard to the procedural history.

So, can a baker refuse to bake a cake for a gay wedding? We don’t know- the Court didn’t actually say.