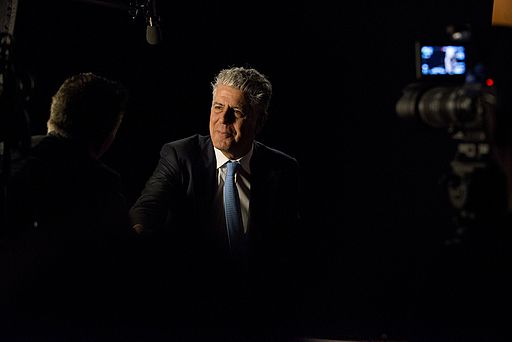 Chef and television food host Anthony Bourdain has died at age 61 in what is being reported as a suicide. The host of CNN’s “Parts Unknown” was found in his hotel room in France, where he was working on a forthcoming episode.

The travel host Anthony Bourdain, whose memoir “Kitchen Confidential” about the dark corners of New York’s restaurants started a career in television, died on Friday at 61.

For the past several years, Mr. Bourdain hosted the show “Parts Unknown” on CNN and was working on an episode in Strasbourg, France, when he died, the network said Friday morning. He killed himself in a hotel room, the network said.

“It is with extraordinary sadness we can confirm the death of our friend and colleague,” CNN said in a statement.

Bourdain had a long career in food, but rose to prominence with the publishing of his book “Kitchen Confidential” that lead to a career in televisoon:

Born on June 25, 1956, in New York City, Anthony Bourdain was raised in suburban New Jersey, developing a devotion to literature and rock music. (His mother was a copy editor and his dad, a music executive.) Bourdain eventually attended Vassar College for two years and then graduated from the world-renowned Culinary Institute of America in 1978.

Later acknowledging self-destructive drug use during his youth, Bourdain soon began running the kitchens of New York restaurants such as the Supper Club, One Fifth Avenue and Sullivan’s. He became executive chef at Brasserie Les Halles in 1998.

In 1997, The New Yorker published Bourdain’s now famous article “Don’t Eat Before Reading This,” a scathingly honest look at the inner workings of restaurants, specifically their kitchens. With his credibility as a renowned chef, the article carried much weight and led to other writing projects. In 2000, his bestselling book Kitchen Confidential: Adventures in the Culinary Underbelly, a vast expansion of the New Yorker article that highlighted Bourdain’s sometimes rough disposition, came out to great popularity.

Bourdain’s was the second high profile suicide this week, following the news of fashion icon Kate Spade’s death earlier in the week.

Bourdain hanged himself, the network said in a statement. He was found dead in a hotel room in Strasbourg, France, where he had been working on an upcoming episode of his program, CNN said.

Bourdain’s death was the second suicide this week of a high-profile American figure. Designer Kate Spade, who built a fashion empire on her signature handbags, was found dead in her New York apartment of suicide on Tuesday.

Suicide rates rose in nearly every U.S. state from 1999 to 2016, according to figures released by the U.S. Centers for Disease Control and Prevention on Thursday.

14 thoughts on “Anthony Bourdain Dead at 61”