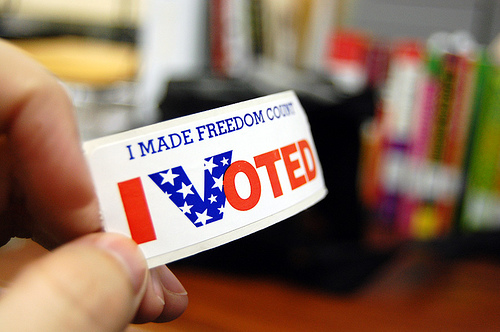 The US Supreme Court today issued a 5-4 ruling on a voting rights case , splitting down predictable party lines. The case involved the practice in Ohio of purging voters who have not voted in several years and who fail to return a notice card confirming their address. The case, Husted v Randolph Institute, et al., concerned whether the procedure violated the National Voter Registration Act. SCOTUS says it does not.

The process Ohio uses is this: when a registered voter who has filed a change of address form with the post office, or has not voted in two years, a card is mailed to their address on file. It is a pre-addressed, postage-paid card, asking the voter to confirm whether they still live in their voting district. The card informs the voter that, if they do not return the card, AND if they do not vote within the next four years, their name will be removed from the voter rolls. Essentially, this means that under this process, a voter will be unregistered after six years of not voting.

Two voting rights advocacy groups challenged the process, alleging the violations of the NVRA. The Act specifically prohibits removing a voter from the rolls due solely to their failure to vote. However, the state argues that it is permissible-and, in fact, mandatory under the NVRA-to remove voters who no longer live in a particular district from that district’s rolls, and that their process is not based “solely” on the lack of votes cast. They argued that the lack of votes is simply a piece of evidence in their determination that the voter has left the area.  The SCOTUS majority, led by Justice Alito, agreed, holding that Ohio is following the law with its notice card process.

Section 8, subsection (a) of the NVRA requires states to “conduct a general program that makes a reasonable effort to remove the names of ineligble voters from the official lists of eligble voters by reason of … a change in the residence of the registrant…” subsections (b), (c), an (d) provide further instruction. Section (b) reads as follows:

shall not result in the removal of the name of any person from the official list of voters registered to vote in an election for Federal office by reason of the person’s failure to vote, except that nothing in this paragraph may be construed to prohibit a State from using the procedures described in subsections (c) and (d) of this section to remove an individual from the official list of eligible voters if the individual – (A) has not either notified the applicable registrar (in person or in writing) or responded during the period described in subparagraph (B) to the notice sent by the applicable registrar; and then (B) has not voted or appeared to vote in 2 or more consecutive general elections for Federal office.

Emphasis added. (c) and (d), referenced above, refer to the provisions of the statute regarding change of address and the notice card procedures.

The challengers argue that the problem lies in using a failure to vote as the impetus for sending out the cards in the first place, and that the cards are simply a pretext for illegally purging inactive voters. The Court was unpersuaded, closely interpreting the language of the relevant statutes in its reasoning. The majority opinion is satisfied that, because the voters are not purged “solely” on the basis of sitting out elections, the state is not violating the NVRA.

Justice Breyer penned a dissent, joined by Ginsburg, Kagan, and Sotomayor, in which he opines that Ohio’s schematic fails the “reasonable” prong of the “reasonable efforts” clause of subsection (a) and “erects needless hurdles” that, in effect, violate voting rights. The dissent adopts the Respondents’ argument that the State of Ohio impermissibly puts the cart before the horse, in identifying non-voters first and then targeting them for the “change of address” removal procedures. As Breyer points out:

In respect to language, §8 says that the function of subsection (d)’s Confirmation Procedure is “to confirm
the change of address” whenever the State has already “identif[ied] registrants whose addresses may have changed .”… The function of the Confirmation Procedure is not to make the initial identification of regis-
trants whose addresses may have changed. As a matter of English usage, you cannot confirm that an event happened without already having some reason to believe at least that it might have happened. Black’s Law Dictionary 298 (6th ed. 1990) (defining “confirm” as meaning “[t]o complete or establish that which was imperfect or uncertain”). Ohio, of course, says that it has a ground for believing that those persons they remove from the rolls have, in fact, changed their address, but the ground is the fact that the person did not vote—the very thing that the Failure-to-Vote Clause forbids Ohio to use as a basis for removing a registered voter from the registration roll.

And around and around goes the logic.
The dissent also questions the validity of the notice cards as a method of verifying whether or not a voter has moved. Breyer states that Ohio sent out 1.5 million of these cards, forwardable by the post office, in 2012. Of that number, 60,000 voters replied that yes, they had moved. 235,000 confirmed that they had not moved; the remaining one million+ (approximately 13% of registered Ohio voters) did not respond at all. The dissenting court members argue that there is no basis at all on which to believe those non-responsive voters have moved.

Sotomayor, in a separate dissent, addresses an issue that the majority did not broach, and the parties did not argue. She opines that the majority’s reasoning “ignores the history of voter suppression” that was the backdrop to the NVRA, and that its holding results in a discriminatory impact, disenfranchising the poor and minorities. She cites an amicus brief by the NAACP, stating that since 2012, downtown Cincinnatti has had 10% of voters in majority African-American neighborhoods removed from the voting rolls, compared to 4% of those in white, suburban neighborhoods. Reasons cited for the disparity include work schedules, mail delivery issues, and “other obstacles”. Sotomayor admits that “[n]either the majority nor Ohio meaningfully dispute that the Supplemental Process disproportionately burdens these communities”, but nevertheless argues that these issues are still germane to the assessment of statutory interpretation.

Reactions to this decision ranged from victory declared for “the integrity of the voting process” to “this is not so bad” to “a tragic blow to voting rights”.  Whether one agrees with this decision or not, the lesson is clear: protect your right to vote. Check your registration yearly. If you happen to receive a card of the sort Ohio sends out, return it accordingly. And above all, exercise your rights, and VOTE.