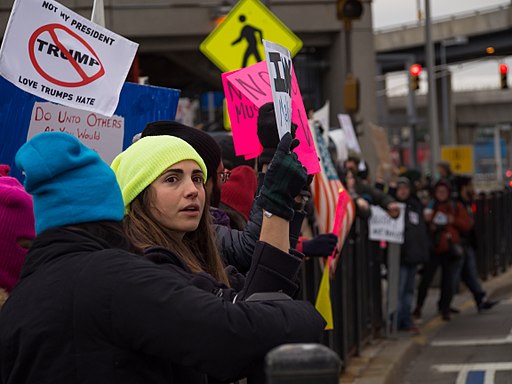 The US Supreme Court today issued its decision in Trump v. Hawaii, holding that the President’s “travel ban”, restricting the entry of foreign nationals from eight mostly-Muslim countries, was a lawful exercise of the President’s authority under the Immigration and Nationality Act (INA).  The executive order, referred to as “the Proclamation”, was challenged by the State of Hawaii, three individuals, and the Muslim Association of Hawaii. The District Court granted a nationwide injunction, and the Ninth Circuit granted a stay, but later ruled for the Plaintiffs in finding that the Proclamation “exceeded the President’s authority”. Today’s SCOTUS decision reverses the Ninth Circuit in a predictably split ruling, with Justices Ginsburg, Sotomayor, Kagan, and Breyer dissenting from the Roberts-written majority opinion.

The plaintiffs argued that the Proclamation violates INA because, for 6 of the 8 countries, the policy discriminated based on nationality, and the President did not sufficiently show that allowing these foreign nationals entry would be detrimental to national interest. The Ninth Circuit agreed, and the Trump administration appealed to the Supreme Court.

The Court noted that the plain language of INA “grants the President broad discretion to suspend the entry of aliens into the United States”, and found that the plaintiffs did not present sufficient grounds to “overcome the clear statutory language”:

The Court further found that the President based the proclamation on the results of “a comprehensive evaluation” by the Department of Homeland Security and other agencies and set forth the basis on which the targeted countries were found deficient, thus satisfying the requirement of INA that the restriction be based on a finding of potential detriment to the United States. The plaintiffs argue that the President’s rationale is not persuasive; the Court questions whether he is required to, but finds that, even if he were, he has done so. (The majority opinion compares Trump’s 12-page proclamation with President Clinton’s 1996 Proclamation No. 6958, a one sentence explanation for the suspension of entry for members of the Sudanese government and armed forces.)

The Court goes on to consider and reject additional arguments regarding legislative intent and structure, before discussing whether the Proclamation violates the INA by discriminating based on nationality. In support for their argument, the plaintiffs point to Section 1152(a)(1)(A) of the INA, which reads as follows:

Except as specifically provided in paragraph (2) and in sections 1101(a)(27), 1151(b)(2)(A)(i), and 1153 of this title, no person shall receive any preference or priority or be discriminated against in the issuance of an immigrant visa because of the person’s race, sex, nationality, place of birth, or place of residence.

The distinction between admissibility—to which §1152(a)(1)(A) does not apply—and visa issuance—to which it does—is apparent from the text of the provision, which specifies only that its protections apply to the “issuance” of “immigrant visa[s],” without mentioning admissibility or entry. Had Congress instead intended in §1152(a)(1)(A) to constrain the President’s power to determine who may enter the country, it could easily have chosen language directed to that end.

As Roberts points out, using 1182(f) to prohibit based on nationality is not new: Reagan used it against Cubans, Carter against Iranians. Also of note to the majority is that the Proclamation applies to North Koreans, a provision that the Hawaii plaintiffs do not challenge, but which would also be illegal under the plaintiffs’ interpretation.

Concluding, the Court discusses what many see as the crux of the issue: whether President Trump’s Proclamation is illegally discriminatory against Muslims, based on the Establishment Clause of the First Amendment, by “singling out Muslims” for unfavorable treatment. Their argument is based on the fact that most of the affected countries have majority Muslim populations- and on the President’s own words. The Court tacitly seems to concede that Trump’s words are not in the spirit of religious liberty for all:

Our Presidents have frequently used that power to espouse the principles of religious freedom and
tolerance on which this Nation was founded. In 1790 George Washington reassured the Hebrew Congregation of Newport, Rhode Island that “happily the Government of the United States . . . gives to bigotry no sanction, to persecution no assistance [and] requires only that they who live under its protection should demean themselves as good citizens.”…

President Eisenhower, at the opening of the Islamic Center of Washington, similarly pledged to a Muslim audience that “America would fight with her whole strength for your right to have here your own church,” declaring that “[t]his concept is indeed a part of America.” And just days after the attacks of September 11, 2001, President George W. Bush returned to the same Islamic Center to implore his fellow Americans—Muslims and non-Muslims alike—to remember during their time of grief that “[t]he face of terror is not the true faith of Islam,” and that America is “a great country because we share the same values of respect and dignity and human worth.”

Yet it cannot be denied that the Federal Government and the Presidents who have carried its laws into effect have—from the Nation’s earliest days— performed unevenly in living up to those inspiring words.

However, the Court opines that its job is not to decide “whether to denounce [Trump’s] statements”, but instead  whether those statements are significant in interpreting “a Presidential directive, neutral on its face, addressing a matter within the core of executive responsibility.” In other words, yes, he said those things, but does the order reflect an otherwise legitimate exercise of authority? The Court thus agreed to consider the statements, but “will uphold the policy so long as it can reasonably be understood to result from a justification independent of unconstitutional grounds” (the “rational basis” test.) Of the Proclamation, the Court says

It cannot be said that it is impossible to “discern a relationship to legitimate state interests” or that the policy is “inexplicable by anything but animus… because there is persuasive evidence that the entry suspension has a legitimate grounding in national security concerns, quite apart from any religious hostility, we must accept that independent justification.

Among other things, the Court noted that the Proclamation applied to only 8% of the world’s Muslim population, and applied to two non-Muslim majority countries (North Korea and Venezuela). Justice Thomas writes separately, emphasizing his opinion that the President’s “inherent authority to exclude aliens from the country” is not subject to any “judicially enforceable limits” under INA. He also addresses the authority of a District Court to issue nationwide injunctions, such as those under review, expressing skepticism at their propriety.

The dissent of Justice Breyer, joined by Justice Kagan expresses disagreement with the majority’s view of how significant “religious animus” was to the Proclamation. In doing so, Breyer notes his belief that the Government is not applying the Proclamation as written. He acknowledges the availability of waivers to the suspension, but notes that the number of waivers granted is minuscule compared to the number of visitors prior to the issuance of the EOs. Because of his questions regarding the sincerity of the waiver process, which he finds important to the analysis, he would have left the injunctions in place and remand for further development of those facts.

Finally, Justice Sotomayor, joined by Justice Ginsburg, delivers the meatiest dissent. At its outset, the dissent accuses the majority of failing to safeguard the principles of religious neutrality in the First Amendment, calling the national security concerns “a facade”:

Based on the evidence in the record, a reasonable observer would conclude that the Proclamation was motivated by anti-Muslim animus. That alone suffices to show that plaintiffs are likely to succeed on the merits of their Estab­lishment Clause claim. The majority holds otherwise by ignoring the facts, misconstruing our legal precedent, and turning a blind eye to the pain and suffering the Procla­mation inflicts upon countless families and individuals,many of whom are United States citizens. Because that troubling result runs contrary to the Constitution and our precedent, I dissent.

Sotomayor recounts then-candidate Trump’s call for a total ban on Muslims entering the United States, citing a television interview in which he defended his views by invoking Franklin Roosevelt’s internment of US citizens of Japanese descent during WWII. Sotomayor goes on to use Trump’s words, citing interviews, speeches, and of course, Tweets, to set forth a several-pages-long, compelling case proving his anti-Muslim intentions.

In rejecting the majority’s disregard for the significance of Trump’s hostility to Islam, Sotomayor reminds us that the Court “recently found less pervasive official expressions of hostility and the failure to disavow them to be constitutionally significant.” She was speaking, of course, of the Masterpiece Cakeshop decision.

Finally, Sotomayor invokes Korematsu v. United States, which challenged the Japanese internment camps Trump referenced. The 1944 Supreme Court gave its blessing to the racially motivated actions of Roosevelt’s executive order- a decision that the majority here denounces as “gravely wrong”, but not analogous to the issue at hand.

The predictable split of the Court on this matter portends the inevitable split between the left and right leaning citizenry, as many decisions this term have done. With the strong, provocative rhetoric from our President which underlies the whole thing, it is hard to reconcile the two sides.

It may be fitting to end with the words of Justice Kennedy, who wrote separately from the majority, though he joins in full. His short concurrence seems to be but a reminder that, even for those actions not subject to judicial scrutiny, all public officials take an oath to uphold the Constitution. Writes Kennedy, “[A]n anxious world must know that our Government remains committed always to the liberties the Constitution seeks to preserve and protect, so that freedom extends outward, and lasts.”