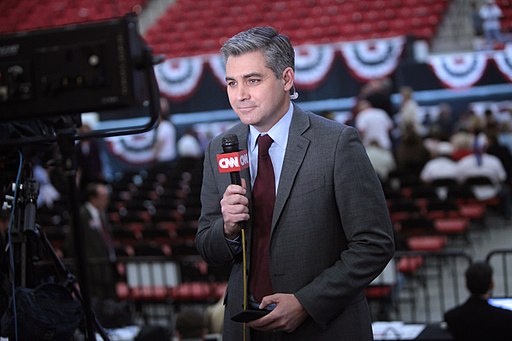 WATCH: The crowd at Trump’s Tampa rally lets Jim Acosta know just how much they love him. ? pic.twitter.com/Xisl4EgtTW

Acosta, who is used to this by now, persevered through his stand-up in that clip, acknowledging the crowd, and finishing his spot. Later, he took to his own Twitter account with his thoughts and some of his own video:

Just a sample of the sad scene we faced at the Trump rally in Tampa. I’m very worried that the hostility whipped up by Trump and some in conservative media will result in somebody getting hurt. We should not treat our fellow Americans this way. The press is not the enemy. pic.twitter.com/IhSRw5Ui3R

Another snapshot from Trump’s Tampa rally, I tried to take a picture with a father and his daughter while people yelled “CNN sucks” in my face. I am sorry that this little girl had to see that. pic.twitter.com/DIHPpCdbb6

Now, Acosta and others are not wrong in worrying that at some point these displays could get out of control. The behavior of some of those at these rallies is inexcusably horrid. Some degenerate could very well revel in shouting “traitor” at a reporter, decide to take it literally, and do something tragically stupid and violent. Any time a group gets overly charged, a mob is only a few bad decisions and a handful of heartbeats away.

But that level of emotional involvement is also the point; it is a tried and true formula for engaging an audience.

The Masters of Fake Reality

Pro wrestling figured this out years before politics did, by taking a theatrical component as old as recorded human performance and monetizing it: good guy vs bad guy. Wrestling nomenclature is face (the good guy) and heel (the bad guy). WWE Hall of Famer and best-selling author Jim Ross explains the idea like this:

How many great movies or TV shows have you seen or how many books have you read  where there wasn’t a definitive hero or villain? Villains can take many shapes and forms whether it be war, disease, a bully, a coward, a cheat, etc. Great villains in the sports entertainment genre are people that a fan will pay to see them get their ass beat. It’s a simple formula that is timeless.

Obviously, today’s pro wrestling villains come in different presentations, more often than not ill planned, but nonetheless having antagonists who people want to see get their mouth shut and ass whipped still sells. In real life there is a fine line, in many cases, between good and evil. However, TV wrestling isn’t real life. It’s show biz and almost every show biz presentation that you or I have ever enjoyed had a hero and a villain component…

These two entities, the good guy and the bad guy, both from opposite sides of their own exclusive fences come together to eventually compete for championships while along the way they have a clearly established personal issue with which the average viewer can relate.

The crowd gets emotionally invested, shows up, watches, and spends money to cheer the hero in finally shutting up the heel. The heel makes sure to keep the crowds riled up. But privately, behind the scenes in the locker room, the heel and the hero are both getting paid as long as each plays their role. They need each other, and they know it. It is a symbiotic relationship to keep the money and ratings rolling in from an entertained crowd.

Enter Donald Trump. No stranger to pro wrestling story lines himself, and like Jim Ross Trump is a WWE Hall of Famer. Some of his media tactics could be right out of the writers’ room for a wrestling show. If you are going to run as a populist savior, you need a villain, or better yet, a powerful conglomeration of villains. You need long odds against a hated rival. You need a bully who has run down the people for years and is due for a comeuppance. What better foil than the news media? For years, vast swaths of America have rightly felt the media was not only biased against, but outright condescending, to them and their interests. What part of that perception they may have lacked was nudged along by the rise of new media, whose own narrative of crusading against the “mainstream” media dovetailed nicely to those sentiments.

It was Trump himself who elevated Jim Acosta, calling him out by name and starting the now common exchanges between the president and the CNN representative. It’s probably the best thing that ever happened to Acosta professionally, and the White House and President Trump love it too. Like the wrestling roles Ross explained, their public feuding serves both their interests.

Jim Acosta is not — despite the chant — a monster, stupid, or a traitor . He’s a reporter, long time media pro, and good at what he does. His Father was a Cuban refugee, his mother’s folks “were of Irish and Czech descent,” and his maternal grandparents are buried at Arlington. If you really must insist on dehumanizing the man because he shouts at the president and has a logo on his microphone, maybe at least read his own account
of what it meant to travel to Cuba as a reporter with his own heritage first.

White House Correspondent is a coveted assignment for network reporters, and as one of the higher profile roles is not entrusted to just anyone. Acosta started out doing college radio and then worked his way up through TV in places like Knoxville, Dallas, and DC more than once. The James Madison University alum worked his way to his current lofty perch. Traditionally a stepping stone to the top of whatever network you work for, time in the Brady Briefing Room is both a slog and a privilege. In print media appearances might not matter as much, but a network reporter in the White House Press Corps needs to stand out, since they are all reporting on the exact same thing at exactly the same time. The biggest names in network news almost all did a turn with POTUS duty. Ambition is part and parcel for the gig.

Sam Donaldson comes to mind, having made his bones by constantly being the focal point of Reagan press conferences. He could be legendarily difficult, but also knew the role he was in. One amazing piece of video is available here, where the man who could stand in front of Reagan challenging his credibility also was the consummate pro when sitting down on the occasion of Frank Reynolds’ death. The line between ambitious and aggressive behavior at that level comes off to others as “being a jerk” and is subjective, but commonly mistaken as the same thing. Is Jim Acosta a jerk? I have no idea. Is he biased? Of course. How do we know that? Because every human being on earth is. Just because he knows how to play to camera and narrative does not mean he cannot deliver big “J” journalism as well. There are many great reporters; you want to be the man at CNN, you better be a great reporter that can put on a show and keep eyeballs on it.

None of this is meant to venerate Jim Acosta, but to offer some context to the cardboard cutout by some on the right of “evil, biased, treacherous” media that is magically spit out of the mainstream media reporter factory. You can rightly claim bias, perhaps even malicious bias, but color with that brush within the lines of not demonizing folks.

And if you are focusing on any of that, you are missing the point anyway. You are buying into the show as more real than it is.

Let’s go back to one of Acosta’s own tweets for a moment:

Another snapshot from Trump’s Tampa rally, I tried to take a picture with a father and his daughter while people yelled “CNN sucks” in my face. I am sorry that this little girl had to see that. pic.twitter.com/DIHPpCdbb6

Note though, that while you are hearing the yelled insults, in the foreground what is actually going on is a Trump supporter asking Acosta for a selfie, and what is apparently a cordial back and forth. Fox 13 Tampa’s Evan Axelbank was there, and described a scene that has become common at these rallies that does not make the social media feeds and b-roll for the networks:

Trump supporters can boo and say forever that they hate CNN and @acosta but after the cameras are off, all I see is them asking his opinion on everything under the sun and if they can take pictures with him. It’s quite a phenomenon. And he handles it like a pro.

The folks in the crowd shaking hands and taking selfies with Acosta get it. Show’s over, time to get an autograph and head home. Some shake the hand of Acosta out of respect, or at least appreciation that they know he is playing his role and that they played theirs, momentarily rubbing shoulders with someone more famous than they. Those who take it too seriously are still chanting and screaming, and may or may not know they are being recorded for the purpose. In the more volatile clips, it’s telling that the folks with the worst behavior turn it up a notch when they notice the camera panning to them. The same can be seen at televised ball games, concerts, wrestling events, and anywhere else cameras are placed in front of a crowd. So perhaps it’s more human behavior under the guise of politics than we give credit for.

The reality here is that the crowd chanting “CNN sucks” has fully bought into the show. They can scream “fake news” all day long, but they have entered into the symbiotic relationship, and they now need the heel Jim Acosta and the villainous CNN to justify their own purpose of showing up for their hero President Trump and protesting the injustice of it all. They need each other. Acosta the pro doesn’t do his stand-up in the media area, on the stage, or outside the building; he makes sure to get the crowd going. Lights on, it’s plowing through his report with a hostile crowd, and tweeting out the story — in many cases accurately — of those horribly behaved ruffians impeding the work of the press. Lights off, shake hands and interact with the people who might have chanted along during the show, but know to turn it off once the show is over, and appreciate the art and effort of the performers.

Yes, we need to worry about the crazy makers. Of course we should all turn it down a notch, and it is fair to point out this current media monster was created mostly by ourselves. Yes, the President should be better than this. Sure, Acosta can be insufferable. Yup, CNN could do more journalism and less antagonism. But that isn’t what we really want. If we did, we wouldn’t pay for the show in views and attendance. In the meantime, let us at least attempt to recognize that while parts are real, we should keep the show in perspective.

So chant away at Jim Acosta, but keep it light-hearted and don’t make it personal. If you cannot like the man, at least respect how great he is at the art of the heel.