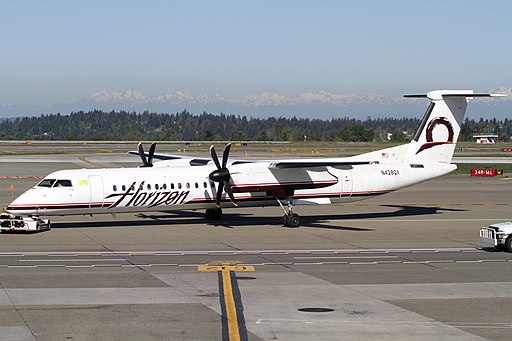 An Employee of Seattle–Tacoma International Airport, shorthanded to SeaTac Airport or Sea–Tac, took a Horizon Air Bombardier DHC8-Q400 on what authorities called an “un-authorized takeoff” before crashing into Ketron Island in Puget Sound.

The Pierce County Sheriff’s Office said a 29-year-old mechanic from an unknown airline stole the Horizon Q400 plane. He was suicidal.

The sheriff’s office said he was either doing stunts or did not have flying skills, which caused him to crash into or near Ketron Island.

Two F-15 fighter jets were following the stolen plane, but authorities said they weren’t involved in the crash. The sheriff’s office said they made it to Seattle from Portland in a matter of minutes and kept the stolen plane away from people on the ground.

The Pierce County Sheriff’s Office said this was not a terrorist incident.

The man certainly seemed troubled, and probably suicidal, in his dealings with air traffic control:

In earlier Air Traffic Control communications, the suspect asked questions like, “Alright, um, I just kinda want to do a couple of maneuvers to see what it can do before I put her down, you know?” He also said, “I wouldn’t know how to land it. I wasn’t really planning on landing it.”

“Man, I’m sorry about this, I hope this doesn’t ruin your day,” he said later. “It’s a blast, I’ve played video games before, so I, uh, know what I’m doing a little bit.”

At one point the control tower pointed the pilot of the stolen aircraft towards the runway at Joint Base Lewis-McChord (JBLM), to which he responded, “Aw those guys will rough me up if I tried landing there. I think I might mess something up there too. I wouldn’t want to do that. Hopefully — oh they probably got anti-aircraft.”

“No they don’t have any of that stuff, we’re just trying to find a place for you to land safely,” the tower responded.

We will no doubt learn more about this incident as the investigation gets underway, but the bigger picture is as we approach the 17th anniversary of 9/11 our airports still have major security concerns. A suicidal employee could just as easily been an individual with far more malicious intent. So how did one employee get an aircraft airborne at a major US airport? Authorities have plenty to review and explain.

Those seeking to do harm to us were no doubt watching. On the positive side scrambled F-15’s arrived in relative short order, but the Seattle area has quite a few potential targets that if a dedicated bad actor got an aircraft up and went straight for one it may not be not be in time. Just looping around and crashing into the terminal itself would be massive potential damage and casualties. In addition to the horrifying prospect of Seattle itself and surrounding population centers, there are (relative to aircraft flight) nearby Navy facilities at Bremerton and elsewhere, and the previously mentioned McChord Air Force Base and Joint Base Lewis-McChord Facilities to think of.

Just in taxing the aircraft around a major airport like SeaTac and getting airborne, it is a miracle no one got hurt or killed. We were lucky he crashed in an unpopulated area. Even in shooting down rogue aircraft once intercepted the potential for debris to cause damage and harm is still there, especially in a metro area. The intercepting pilots are trained to monitor, push the aircraft away from populated areas, and if not harming anyone let it go under observation, but they can shot it down if posing a threat. It is hard to fathom, but it is the lesser of evils in such circumstance, and the standard needs to be made known that if you have a rogue aircraft that refuses to comply, even if just talking through the troubled pilots issues, authorities will make the right call and shoot it down. Otherwise, some terrorist with a plane full of people might sob story his way into an unspeakable tragedy.

We were lucky this time.