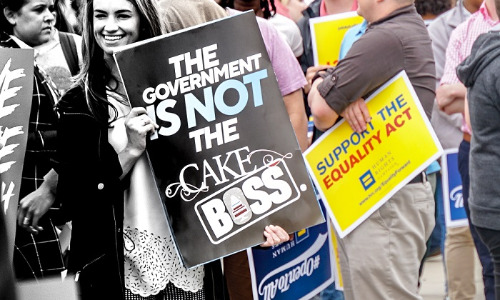 The US Supreme Court ruling in the Masterpiece Cakeshop same-sex wedding cake case was a clear, decisive, incontrovertible punt, and its inaction has had consequences.The baker who refused to bake the cake “won”, but only because of what the Court saw as blatant bias on behalf of the state in its openly hostile treatment of the bakery. The Court did not rule that sexual orientation discrimination based on religious beliefs is acceptable, nor did it reach a broader ruling on the free speech issues presented. The decision, if it could be called that, was neither a “victory for religious freedom”, as touted by some, nor a “devastating blow to civil rights”, as decried by others.

The Court had a chance to do what is expected of the highest court, ostensibly comprised of the greatest legal minds in the country: weigh the conflicting interests of religious liberty and the rights of LGBTQ persons to be free of discrimination in a public accommodation. It is a perilous gap to bridge, but those nine justices have been trusted with the knowledge and wherewithal to do it.

But they didn’t. They could have tackled the matter head on and settled it with a decision that would assuredly be considered a landmark ruling. Instead, they punted the ball back with an admonishment to be nice, both sides left to continue the game without any rules to guide their plays.

And so, Masterpiece Cakeshop finds itself once again on the offensive against accusations of discrimination. This time, the plaintiff is a transgender lawyer who, on the day the Supreme Court announced it would take up the gay wedding cake matter, asked the Cakeshop to design a cake for her that would celebrate her transition from male to female. As he had with the same-sex wedding cake order, owner Jack Phillips declined, citing his religious beliefs. The lawyer, Autumn Scardina, filed a discrimination complaint against the Cakeshop with the Colorado Civil Rights Commission, the same entity that SCOTUS ultimately found as unfairly hostile to Phillips. Shortly after the Court’s June 4 decision, the Colorado civil rights division found probable cause for Scardina’s civil rights complaint, prompting Phillips to file suit against the state for violation of his first amendment rights to freedom of religion and freedom of speech.

As this case works its way through the system and possibly back before the Supreme Court, one must note the damage caused by the Court’s failure to make a decision on the merits.

In addition to the ongoing indignity suffered by the LGBTQ community who continue to be refused service, the unsettled law also hurts businesses like Masterpiece who continue to grapple with complaints like that of Scardina and others.

And it looks at least on the surface like Scardina’s complaints are in bad faith, rather than a legitimate customer simply looking for service. According to Philips, Scardina has called repeatedly in the last year, asking for satanic themed cakes in addition to her request for the transgender celebration cake. Scardina has apparently set her sights on Masterpiece and its owner’s religious beliefs. The calls are not only a nuisance, but each one a potential civil rights complaint with which the baker must contend.

Had the Court done its job, both sides would know, for better or worse, what they are required to do. The shop would know it had to either bake the cake or make a decision to go out of the business of custom cakes, or the LGBTQ community would know they had no recourse but bad publicity and a visit to a friendlier merchant. And obvious opportunists like Scardina would be neutralized. Instead, we continue to operate in no man’s land, in which the LGBTQ community is freely discriminated against, and businesses are encumbered by litigation and complaints.

This ball is bound to land back in the hands of the United States Supreme Court. When it does, one can only hope an actual decision on the merits is reached. Then, we can argue about whether or not it was the right one.

153 thoughts on “The Cake War Rages on After SCOTUS Punt”