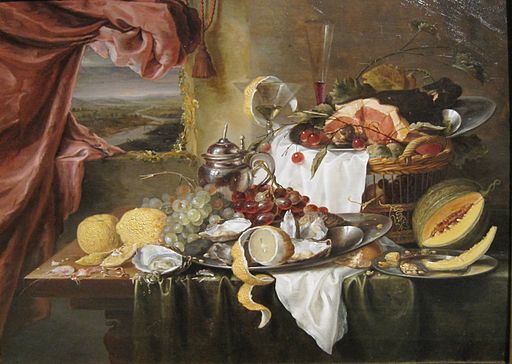 [Mu1] We’ve known listening to music during workouts helps, now we have some science to back up the commonly held belief. And, yes, it really can help.

[Mu2] “Easter eggs,” subtle references hidden in movies, have become a thing, and now music videos are getting into the act.

[Mu3] The “music” of volcanos erupting, and how “charting” the infrasonic clues could be a breakthrough predicting eruptions.

[Mu4] Yesterday marked 17 years since the death of R&B singer Aaliyah in a plane crash. Here’s a brief overview of her career.

[Ar1] Art among the ruins is a common theme; so it is with the aftermath of Hurricane Harvey.

[Ar2] AI-produced art has hit the big time, literally, with a first of it’s kind offering by Christie’s.

[Ar3] “Proust’s mid-career struggles with writing led him to art criticism, which provides clues to the qualities prized by readers of In Search of Lost Time.”

[Ar4] When we think of art exhibitions, dressed up folks with cocktails mingling might come to mind. I like this piece because it starts with the artist trying to figure out how to carry their piece from the car, while closing the doors and not dropping it, on the way into the building.

[Ar5] This Quillette piece argues that there are too many artists, too little talent, and not enough people to say so.

[Hi1] Known for it’s leaning tower, in the Middle Ages Pisa was known for its port, and the recovering of that lost history is fascinating.

[Hi3] John Chapman became the first Air Force member since Vietnam, and 19th overall, to receive the Congressional Medal of Honor (Posthumous) this week. The story of what really happened on Takur Ghar 17 years ago can hopefully be a ghost finally put to rest.

[Hi4] Sam Wilkinson touched on the history of the “Silent Sam” statue that was torn down by protesters this week, but here is the rest of the story, and how it is incomplete even after it’s fall.

[Fo1] So what do you do in one of the worst traffic jams in LA history, where burning fuel truck shuts down the highway? If you are a food truck, you open for business and start serving breakfast on the spot.

[Fo2] “Just four crops – wheat, maize, rice and soybean – provide two-thirds of the world’s food supply. But scientists in Malaysia are trying to change that by reviving crops that have been relegated to the sidelines. ”

[Fo3] Fast food was invented to entice folks that didn’t want to make food at home. Drew Magary goes the other way with that idea, and lays out copy cat recipes for eating, and making, your favorites at home.

[Fo4] “Food as medicine,” takes on a new meaning for these non-profit and volunteer organizations.

[Re2] Here’s one you might not have thought of: your religious influences affects your psychedelic drug experience.

[Re3] Teaching World Religions in high school is getting a makeover, and it’s instigator is a teacher from Harvard Divinity School’s Religious Literacy Project, and whose own parents are an ex-nun and ex-monk.

[Re4] Pew has a bunch of data on how Americans are more religious than folks in other wealthy nations.