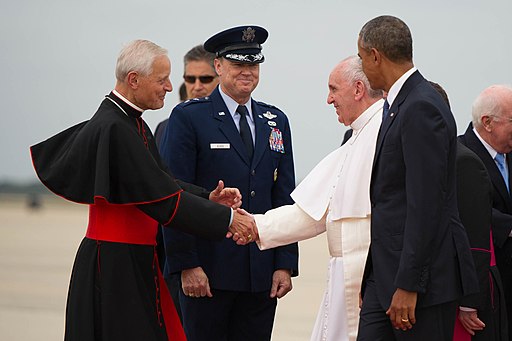 The anger at Catholic leaders over their part in covering up years of abuse is starting to explode in very public ways, and some of those leaders are handling the backlash as badly as possible.

On Monday, (Chicago based) Cardinal Blase Cupich responded to a scathing letter by former top church official in a controversy that has the so-called whistle-blower calling for the pope’s resignation.

The pope said only, “I will not say a single word about this.” He called on journalists to make their conclusions and said “It’s an act of trust.”

“The pope knows we have a bigger agenda. We have to speak about the environment, about the poor, we have to reach out to people who are marginalized in society. We cannot be distracted at this moment,” Cupich said.

The contest of which statement, the Pope’s “no comment” or Cupich’s “bigger agenda” is the more tone deaf is a matter of personal perspective. What is becoming increasingly clear is the Vatican has no idea how to handle this present crisis it finds itself in.

The smoldering public anger in the US from the Pennsylvania Grand Jury investigation returned to a burning fire with the release of the Vigano letter. In over 11 pages and 7K words, the former Vatican ambassador to the US laid out accusations of systematic cover-up that goes all the way to the Vatican:

In his letter released over the weekend, Vigano wrote that (Popes) Francis and Benedict were aware of sexual abuse by McCarrick, the former cardinal who led churches in the Washington region from 2001 to 2006.

McCarrick resigned in July and was stripped of his title of cardinal after U.S. news outlets reported that he had abused seminarians. Vigano also said that other Catholic figures, including Cardinal Donald Wuerl, the archbishop of Washington, were aware of the abuse.

Wuerl said through a spokesman that he was never told that the Vatican had barred McCarrick from celebrating Mass.

Vigano is a controversial figure himself, and has drawn criticism for laying part of the blame for the abuse scandal at the feet of “homosexual current” and “pro-gay ideology”. Church officials have been quick to point out Vigano may have his own ax to grind against the Vatican:

“This letter has everything to do with factions in the church that are vying for power and influence,” said Massimo Faggioli, a professor of theology at Villanova University who studies the Vatican. “You have a convergence of interests that is making this a huge mess in the U.S. Catholic Church.”

Which might well be true, but the problem Faggioli and others that try that line of defense have is the abuse is not only in the US, but worldwide. Chile just saw a mass resignation of bishops and raids by prosecutors who are investigating abuse and coverup in that country. In Australia, the Archbishop of Adelaide was convicted of covering up child abuse in the church there, and had to be forced from his positions by pressure from then-Prime Minister Turnbull and others.

Meanwhile in the US, the dam of silence might finally be breaking. Social media was alight with not just outrage, but reports on Sunday of parish priests openly condemning the silence by the church and the coverups in their Sunday messages. Public reaction to the Vigano’s letter was mixed, but noted for some support among church officials:

In a statement released Monday, Cardinal Daniel DiNardo, the president of the U.S. Conference of Catholic Bishops, said the allegations must be investigated.

“The questions raised deserve answers that are conclusive and based on evidence,” DiNardo, the archbishop of Galveston-Houston, said. “Without those answers, innocent men may be tainted by false accusation and the guilty may be left to repeat sins of the past.”

Also named in the letter was Cardinal Joseph Tobin of Newark, N.J., who said in a statement that the allegations had “factual errors, innuendo and fearful ideology.” Tobin said there needed to be “scrutiny of the claims” to “help establish the truth.”

Archbishop Charles Chaput of Philadelphia, a leader among conservative Catholics, issued a statement praising Vigano’s “integrity” but said he could not comment on the letter because it had details “beyond his personal experience.”

Bishop Joseph Strickland of the Diocese of Tyler, Texas, went further. In a letter to church members, he said that the details in Vigano’s letter “are still allegations but as your shepherd I find them to be credible.”

The leadership of the Catholic Church has only themselves to blame for this. While the claims by Vigano are still just that, it is very clear that something very wrong has gone on for a very long time. What also is clear is the hierarchy of the Catholic Church up to and including the Pope is in no hurry to do anything meaningful about it. Whatever Vigano’s motivation, he is either lying or telling the truth, and “no comment” is no longer going to cut it with an increasingly furious congregation that not only wants answers, but is rightfully beginning to feel stonewalled.

When writing about the Pennsylvania report some weeks ago, I wrote this, and it applies still. I fear this concern will be proven horrifyingly true the further we go into the dark recesses of this coverup:

No comment. No contrition. Move the next official up to replace the removed one and carry on. It’s been established; this is the Catholic Church’s pattern for decades. We have 2000 years of history that says the Catholic Church cannot be trusted to police itself, preferring to maintain its own power structure and public image. If the abuse of victims by the Catholic Church is hard to bring to light in countries with strong legal rights, established criminal justice systems, and free presses like the United States and Australia, what horrors lie uncovered in the diverse places where such freedoms do not exist but the Catholic Church does?

I ended that piece by calling on Pope Francis to clean house and then resign himself. I feel even stronger about it now. The Pope’s silence is deafening, and the current tactics of deflection by blaming homosexuals, decrying intra-church politics, claiming a conspiracy to overthrow the Pope, and dozens of other excuses are all just more kindling for the fires of lies that brought this hell upon innocent victims in the first place. Proclaiming to be God’s instruments on earth, the leaders of the Catholic Church who covered up, enabled, and excused the abuse of children and others for decades perpetuate suffering with the hypocrisy that they are above all accountability. The guilty should be brought to swift justice by law enforcement authorities. The good and decent of the Catholic faith should rise up and cleanse their church of anything and anyone that even tacitly allowed the abuse of innocents. Until then there will be, and shouldn’t be, any peace to be found within the guilty of the Catholic Church.

59 thoughts on “A Hell of Their Own Making”