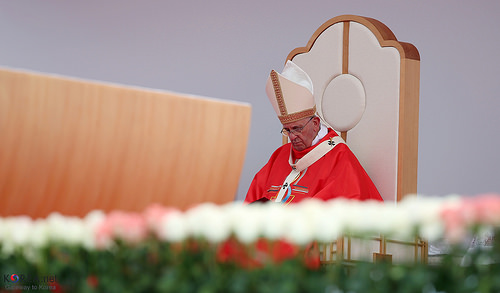 It’s easy to watch a sex abuse scandal develop, again, within the Catholic Church and think to yourself that this is something that happens over there.  To them.  And with that thought it becomes far too easy to turn away.  You can glance across the internet at Rod Dreher, or Michael Brendan Dougherty, or Matthew Schmitz, or Elizabeth Bruenig, or a myriad of others and think, like the imagined listener of Leonard Cohen’s “Please Don’t Pass Me By (A Disgrace),” “Oh, he’s up there saying something that he thinks about, but I’ll never have to sing that song.”

If that’s you, then let me be the one to insist: You must not turn away, even if (like me) you are not and have never been a Catholic. And then, with eyes to see and ears to hear, you must let this change your life.  Because, and here I’ll turn back to the words of the Jeremiah of Tin Pan Alley,

I promise you friends that you’re going to be singing this song.  It may not be tonight, it may not be tomorrow, but one day you’ll be on your knees.  And I want you to know the words when the time comes.

Because the only thing unique about the systemic cover-up of the abuse of children, seminarians, and others by the Catholic Church is the sheer scale.

My religious community—American Judaism—tells itself that we aren’t deluded, that we know abuse happens. But only, or almost only, among the Hasidim, in the most insular and least modern segments of our co-religionists.  Even in Modern Orthodox synagogues like the one I attend, we tell ourselves that it happens to them.  It’s a thing they do.

(And, to be clear, the communal insularity and the distinct nature of the hierarchies in Hasidic and Haredi communities does make the problem worse there.  If you watch the recent documentary One of Us, the first voice you will hear belongs to a friend of mine as she pleads with a 911 operator.  I’m not trying to downplay this.)

But it happens here, too, as I learned a handful of years ago while I helped to pack the books in the apartment of a member of my synagogue who had died suddenly.  I don’t know what, exactly, the neighbor who first entered his apartment after his death found that prompted her to call the police, but this much I know is true: the man was a predator and had been for decades.  He quite literally destroyed, I have reason to believe (but no documentation to prove), at least four lives.

Yet someone did have documentation, or at least knowledge.  Someone must have.  Because the dead man told me plenty about himself before I knew what he was: His bitterness toward the city where he had once held a part-time rabbinic position but which had forced him out because, he spat, of “rumors.”  How the company he worked for—a minor but nationally-recognizable Jewish organization—had moved his full-time workplace after this, and tried to force him to move to cities he didn’t want to live but where, he told me, “they could keep an eye on” him.  (He negotiated his way to my town.)  And well before this, when he was fresh out of rabbinic school in the late 1980s, long before he had the career of an abject failure, when he was still the educator he claimed he was supposed to be, and but for the employers and the rumors would have been, he was shuffled for half a decade among elementary schools in the Greater New York area, before being punted to the frontiers of American Jewry: small-towns in the Midwest.*

This is a truth as undeniable as the fact of his abuses: Someone in a position of power in the mainstream American Jewish community attempted to cover up for him.

What I’m trying to say is this: more than abuse happens “here” as well as “there.”  So does the more mundane evil of attempting to protect the institution, or one’s own career.  Or even something truly good: trying to do what’s “good for the Jews,” or good for the spread of the Gospel you believe is the only path away from eternal damnation.  Even that which is good in itself can be twisted to the purpose of evil—and without the actor even realizing it.

Nor am I talking only about the religious. Look at State College, at East Lansing, at Columbus.  Look at the crowds who gathered and argued that men who are good at winning ball games should not be punished for covering up pedophilia, spousal abuse, and rape after rape after rape.

You must watch, and you must let this change your life.  Because there may come a time when you, too, will face a test.  More likely than not, you won’t even realize it.  The choices won’t seem dramatic enough for it to be a test.  That’s when you’re likely to fail.

What I mean is this: there may come a day when you are forced to choose between acting for one good or what seems like–what has until this moment truly been–another.  As Cardinal Cupich put it recently, to his lasting shame, perhaps investigating the systematic cover-up of sexual abuse risks compromising a political agenda of compassion and environmental stewardship.  Maybe you face that choice not as a Bishop of the Roman Catholic Church, but as a reporter or headline writer at Reuters.  Hopefully, your answer will always and only be as uncompromising as Ordinary Times-alum Matthew Schmitz:

Several statements by liberal Catholics have hinted that conservatives shouldn’t raise a fuss about McCarrick because some conservatives will end up discredited as well. The only response to this suggestion should be: Go right ahead. Expose it all.

There may come a day, as I once feared there would for me, when you have to choose between letting a pedophile be honored in death or alienating yourself from friends and potentially destroying your congregation. (A push was underway to name a library we share with another institution after him — and though the effort was quietly dropped, it wasn’t immediately clear this would happen.)  Or maybe the choice will be subtler and (as it was for me) harder to grapple with: Do you believe what you’ve seen or heard, or do you convince yourself that you imagined the entire thing?  (Do you let yourself admit the obvious to yourself, that others in power must have known? It took me over three years to do this.) There may come a day when you must choose whether you’ll risk breaking your faith in a cause or a God, whether you’ll knowingly cause pain to people, institutions, and communities you love dearly, by pursuing what’s good. I’m as liable to fail as anyone, as liable to not even realize the test is in front of me.

How do you train yourself for it?  I don’t know with any certainty.  But I suspect this has something to do with it: watching with open eyes and ears that hear. It’s imperative, always ongoing, always in the present tense: You must change your life.

And maybe this too, to borrow again from Leonard Cohen: from time to time, to fall down on your knees in a vacant room and beg aloud, so you know the words and the melody when the time comes:

*You’ve probably noticed that I haven’t used the names of any individuals or organizations in this post.  That’s because, while I’m certain of some facts, I don’t have the hard evidence and documentation that I can offer in confirmation.  It’s also unclear to me, when I mention organizations, which of several possible organizations this may have been — or if they were even aware of what they were doing (as opposed to an individual with influence casting about for a landing spot where no one in a “major” Jewish community need hear, see, speak, or think of this man again).  And why don’t I name him?  I’m more than willing to do so in private. (I have no illusions that this will be the case — but if this scenario sounds like something you know of, or about, you can contact me at: jlwall -dot- OT -at- gmail -dot- com.) But publicly — well, the issue of documentation is still there.  As is the Jewish tradition of letting (or wishing) for the names of evildoers to wither away — “May his name be blotted out,” and all that.  And, of course, there’s the fact that not everyone in this community knows all these facts.  Maybe all this means that I’m failing the same tests I talked about above, despite myself.

Photo by KOREA.NET – Official page of the Republic of Korea

Techlash and SoulcraftThe Death of TragedyThe River is a Strong Brown God
[archive]
Please do be so kind as to share this post.