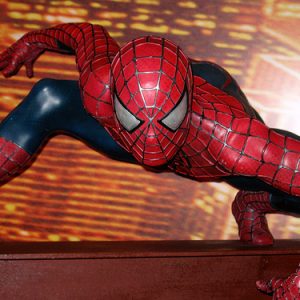 There are a couple of exceptions, though. The two big ones are Batman and Spider-Man. I mean, sure, the plots are more likely than not to be juvenile (bad guy shows up, bad guy gives speech, good guy shows up, good guy hits bad guy, back to baseline) but there are thematic elements at work that make these two into things that even grownups who aren’t perpetual adolescents can enjoy at more than a “I need to sit in some air conditioning for a couple of hours” level.

Batman because, at its best, it explores the whole idea of what constitutes civilization and order and the costs of maintaining it. Batman’s villains are the various things threatening to undercut those things. Anarchy, institutional corruption, fear, organized crime… it’s even got a world view that assumes (or suggests) that these things are sicknesses that can be (or should be) cured. (That’s probably an essay for another day.)

Spider-Man (again, at its best), however, explores the idea of doing the right thing even at great personal cost and not giving in to just yelling “HECK WITH IT!” and going with your baser urges instead. (Most of Spider-Man’s top enemies people who decided to just yell “HECK WITH IT!” and go with their ids. Green Goblin, Doctor Octopus, The Lizard…)

What makes Spider-Man work, though, is how it portrays the “great personal cost”. It’s not about how he loses his billions or his planet or weird stuff like that. It’s about trying to make rent and being unable to because he got fired from his job because he was late because he was helping people anonymously (or pseudonymously). He knows that With Great Power Comes Great Responsibility and he helps people anyway. Even if it makes him late for his job. Even if it doesn’t have a reward. Because you’re supposed to do the right thing if you can.

Now, they cheat a little bit by showing the joy that can come with being good at something and enjoying being good at it. The fun part of learning how you can do what you do. Climbing walls. Swinging between buildings. Helping people.