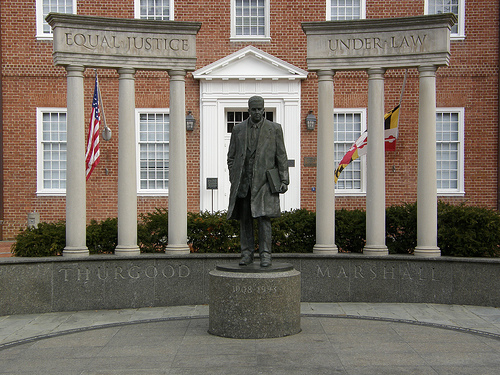 51 years ago today, the great-grandson of a slave was sworn in as the first black justice on the Supreme Court of the United States. Thoroughgood Marshall (who reportedly rechristened himself “Thurgood” in second grade), a proponent of civil rights and a jurist who believed in the constitution as a living document, would serve on the court for 24 years.

Thurgood Marshall was born on July 2, 1908, in Baltimore, Maryland. He was the second child born to Norma Arica Williams, an elementary school teacher, and William Canfield Marshall, a waiter and country club steward. His family enjoyed a comfortable, middle-class existence. Marshall’s parents placed great emphasis on education, encouraging Thurgood and his brother to think and learn. Whenever Thurgood got into trouble at school, he was made to memorize sections of the U.S. Constitution. This well-intended punishment would serve him well in his later legal career.

President John F. Kennedy (1917–1963) nominated Marshall in September 1961 for judge of the Second Court of Appeals. Marshall was confirmed by the Senate a year later after undergoing extensive hearings. Three years later Marshall accepted an appointment from President Lyndon Johnson (1908–1973) as solicitor general. In this post Marshall successfully defended the United States in a number of important cases concerning industry. Through his office he now defended civil rights actions on behalf of the American people instead of (as in his NAACP days) as counsel strictly for African Americans. However, he personally did not argue cases in which he had previously been involved.

In 1967 President Johnson nominated Marshall as associate justice to the U.S. Supreme Court. Marshall’s nomination was strongly opposed by several southern senators on the Judiciary Committee, but in the end he was confirmed by a vote of sixty-nine to eleven. He took his seat on October 2, 1967, becoming the first African American justice to sit on the Supreme Court. During his time on the Supreme Court, he remained a strong believer in individual rights and never wavered in his devotion to end discrimination. He was a key part of the Court’s progressive majority that voted to uphold a woman’s right to abortion (a woman’s right to end a pregnancy). His majority opinions (statements issued by a judge) covered such areas as the environment, the right of appeal of persons convicted of drug charges, failure to report for and submit to service in the U.S. armed forces, and the rights of Native Americans.

In addition to his time on the court, Marshall is also remembered for his role as an advocate in some of the most well known cases of his era. Notably, he appeared before the Court on behalf of Oliver Brown in the landmark segregation case Brown v. Board of Education of Topeka, and later on behalf of the United States as Solicitor General in Miranda v. Arizona, from whence came the famous “Miranda rights”.

In a time in which partisanship rules the day and confirmation hearings have become an all out war, that Marshall was confirmed 69-11 seems remarkable. Two notable “nay” votes: Senator Robert Byrd, who would later claim to regret his stance opposing civil rights, and Senator Strom Thurmond, who apparently did not.

As we await the fate of the currently pending nomination, take a minute to remember one of the most celebrated and accomplished justices in the history of our country.

17 thoughts on “Remembering a SCOTUS Legend”