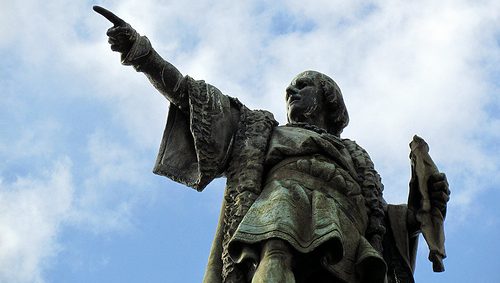 Increasingly in recent years, Columbus Day has been in the crosshairs of many Americans seeking to account for its namesake’s brutal treatment of America’s indigenous peoples. As the debate over Confederate memorials and place names spreads to other figures in American history whose behavior towards blacks and American Indians were unambiguously immoral, Christopher Columbus has become a prime target.

But while Columbus may have been an inhumane monster by today’s standards, the majority of his contemporaries in their Age of Exploration were no better. Vasco De Gama and Juan Ponce De Leon each committed their share of atrocities. The Spanish (Cortez, Pizarro, Coronado) and Portuguese (Almeida, Albuquerque) conquistadors who immediately succeeded them were even worse. Ferdinand Magellan and John Cabot appeared to be the best of a bad bunch, but effectively the entire era was characterized by avaricious, bloodthirsty adventurers who cared little for human dignity when profit and glory were at stake. Columbus is less problematic than the Age of Exploration more broadly speaking.

But even casting aside his moral failings, is Columbus worth venerating?

What’s in a Holiday?

We create and observe national holidays not to celebrate individuals, but rather virtues considered nationally important. Labor Day, Veterans Day, and Memorial Day are all relatively self-explanatory. Thanksgiving came to embody communitarian values, and Christmas, to the extent its secularization hasn’t been overly commercialized, the values of charity and peace for mankind. Independence Day celebrates nationhood and the values espoused by our Declaration of Independence.

George Washington’s Birthday is informally recognized as Presidents Day, and broadly venerates the executive leadership that has steered our country through challenging and occasionally existential moments. Martin Luther King Day is less a celebration of the life and legacy of Dr. King than an ode to the entire Civil Rights Movement, of which he was a unifying and (today) non-controversial leader. So if equality for all Americans is the virtue espoused by that holiday, then what purpose does Columbus serve?

We shouldn’t go down the road of renaming every street, school, and city to conform with modern values, but we should ensure our national holidays maintain modern relevance. Simply put, Christopher Columbus has lost his. He did not in fact discover our continent, which we’ve known definitively for decades. Elementary school kids learn his rhyme “In Fourteen Hundred and Ninety-Two…,” but his significance in those lessons is more central to European history than anything intrinsically American. He does represent part of the origin story in our national narrative, but future explorers arguably contributed more to our national identity.

The Age of Exploration was deeply consequential for the Americas, not only because the Age of Conquest immediately ensued, sending European colonizers and African slaves across the Atlantic for the first time. It also fundamentally changed the way Europeans viewed themselves and the world around them. These expeditions facilitated scientific discovery, introduced new crops, flooded Europe with gold, and gave the Catholic Church a new outward-looking purpose amidst a tumultuous Reformation.

However, subsequent periods of exploration and discovery were far more impactful in terms of building the American narrative and shaping our national psyche. French and English explorers of the 17th and 18th  centuries enabled the establishment and growth of early colonies. American frontiersmen of the 18th and 19th century, the most famous of whom were Meriwether Lewis and William Clark, paved the way for westward expansion. Following our independence from Britain, Americans increasingly came to believe the entire New World was ours for the conquering, and those exploring our land and waterways played no small part. For better or worse, the Monroe Doctrine, Manifest Destiny, and Roosevelt Corollary emerged from this mindset. It also shaped our literature and art, settlement patterns, and domestic politics through modernity (and post-modernity).

Navigation of the skies in the early 20th Century not only stimulated invention, but narrowed the distance between nations and communities. Likewise, human spaceflight forced us to reconsider our place in the cosmos, forged international cooperation, and helped build the modern environmental movement. Human discovery has always pushed our nation forward, if unevenly and sometimes with awful consequences, but that desire to explore and tame the unknown remains a virtue worth celebrating and instilling in all Americans.

An expansion of Columbus Day to encompass other adventurers of all American epochs would be most fitting, and allow today’s far more diverse American citizenry to embrace a common thread in our shared history. So why not rename it Explorers Day, simultaneously celebrating entrepreneurship and discovery, and encompassing all intrepid adventurers, of land, sea, air, and space?

The opening of the American continents to European settlement was a watershed moment in human history, but why not also recognize those who mapped our frontiers, navigated our rivers, conquered our skies, and brought us ever closer to stars? These figures are more relevant to all Americans because they shaped the places we live, the ways we travel, and the scientific discoveries that continue to define our world. So let’s bring Lewis and Clark into the holiday. And Sacagawea. Robert de la Salle and Henry Hudson. Charles Lindbergh and Amelia Earhart. The Mercury 7, Apollo 11, and Sally Ride. We’ve seen more than a dozen African-Americans and more than 40 American women complete spaceflights, to say nothing of the women, immigrants, and peoples of color who were American explorers of those previous eras.

We want today’s and tomorrow’s kids to embrace that same adventurous spirit, ensuring Americans remain leaders in discovery at the depths of Earth’s oceans and beyond its atmosphere. Christopher Columbus doesn’t hold that relevance anymore, and maybe he never did. But rather than focus on his flaws, let’s remember why we celebrated him in the first place, and rename the holiday to better capture that virtue.

Israel, Cyprus, and a Personal Journey Through the Crusades
[archive]
Please do be so kind as to share this post.

93 thoughts on “Rename Columbus Day for All Explorers”