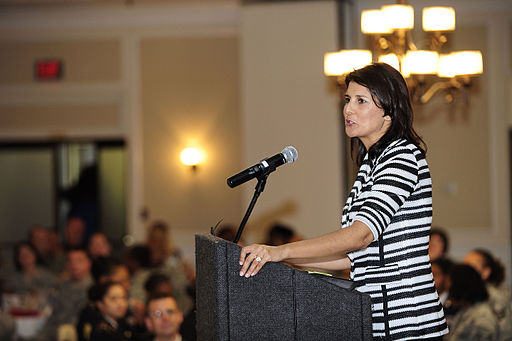 Nikki Haley, the United State’s Ambassador to the United Nations, has resigned. In accepting her resignation President Trump says Amb. Haley will leave her position at the end of the year.

In an unexpected development, President Donald Trump’s U.N. ambassador, Nikki Haley, plans to resign, according to multiple people with knowledge of her decision.

In an Oval Office announcement alongside the ambassador, Trump told reporters that Haley came to him six months ago and said that she wanted to take a break at the end of the year.

Haley informed her staff Tuesday morning that she plans to resign. The news of Haley’s resignation was first reported by Axios.

Some context to the rampant speculation:

JUST IN: Trump says Haley told him six months ago that at the end of a year or two-year period she wanted to take some time off https://t.co/Sf5vTILBtn pic.twitter.com/hPCYyOCWaL

MORE: Haley says she will not be running in 2020, will campaign for Trump