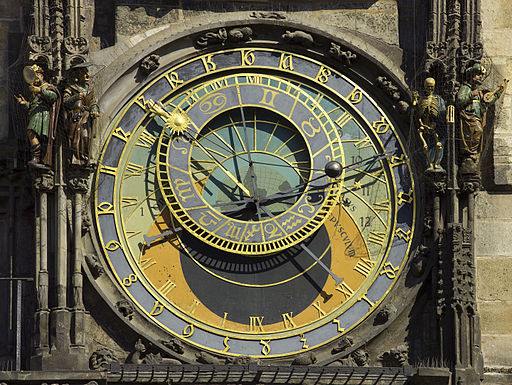 But all the while I sit and think
Of times there were before
I listen for returning feet
And voices at the door”
– J.R.R. Tolkien

Linky Friday: All in Due Time

[Ti1] Real-time trolling: “Politics has always involved shadings of the truth via whisper campaigns, direct-mail operations and negative ads bordering on untrue. What is different this time is how domestic sites are emulating the Russian strategy of 2016 by aggressively creating networks of Facebook pages and accounts — many of them fake — that make it appear as if the ideas they are promoting enjoy widespread popularity, researchers said. The activity is also happening on Twitter, they said.”

[Ti2] It’s a matter of time before the stock market comes back to Earth, so what to make of this weeks “dip”: “Is It Time to Buy the Dip? Wednesday’s stock selloff was bigger than usual, but buying now depends on your investor psychology”

[Ti3] Will touched on this earlier this week, but some are saying it’s time for an Internet Bill of Rights.

[Ti4] Among other nuggets of knowledge discussed in the White House Thursday: “Becoming philosophical, (Kanye) West observed: “Time is a myth. All we have is now, all we have is today.”

[Ti5] Time is undefeated in sports, especially in football, as Eli Manning is finding out right now.

[Ti6] After two years of hand-wringing, time’s up on election security for 2018: “For many, the most intense race leading up to Election Day won’t be among politicians. It’ll be the mad, final scramble by county officials and tech companies to make sure your votes are safe from hackers. But with the slow pace of funding, unprepared campaigns and lack of cooperation among counties, many cybersecurity experts wonder if they’ll reach that finish line by the first Tuesday in November.”

[Ti7] The Fed disagrees about what time it is: “It appears that we have come to a critical crossroads: If the economy is decelerating but the Fed doesn’t see it, which would be the logical conclusion from the FOMC minutes and the Chairman’s remarks, then the danger is that, as they have consistently done in the post-WWII modern era, they will over-tighten with recessionary consequences.”

[Ti8] A baseball legend gets the Google doodle treatment: As a Pirate, (Roberto) Clemente would go on to win 12 Gold Gloves (tied for most among outfielders), four National League batting titles, two World Series rings, and the World Series MVP for 1971. He had a batting average of over .300 for 13 seasons and is credited with professional baseball’s only inside the park, walk-off grand slam. He recorded his 3,000th and last hit during the final regular season at-bat of his career in 1972. Hall of Fame numbers, for certain. But it’s also for Clemente’s humanitarian efforts that Google, in the spirit of Hispanic Heritage Month, dedicated its Doodle on Friday to the first Latin American player enshrined in Cooperstown.

[Ti9] Buying a little more time: “A federal appeals court has temporarily halted the execution of Tennessee death row inmate Edmund Zagorski to allow time for consideration of arguments that he had poor legal representation during his trial and sentencing.”

[Ti10] Speaking of death row, these 8 individuals on Washington State’s Death Row are going to having plenty of time on their hands now that their sentences will be automatically commuted to life. Here are some profiles, including serial killer Robert Lee Yates, Jr.

[Ti11] A little less President Trump in prime time lately: “As he’s ramped up his rally schedule ahead of the midterms, viewership numbers for the raucous prime-time events have been roughly similar to — sometimes dipping below — Fox News’ regular programming, and the network has recently stopped airing most evening events in full.”

[Ti12] Nikki Haley made headlines announcing she wanted some time off, prompting speculation as to what would be in her future. Many are pointing to financial motives, like this money article, but reality is even if you take the high number of $1M in debt, that’s probably covered quickly with some speaking engagements and other private sector work.

[Ti13] Time’s up for Sears, whose long, slow fight to survive might be ending as bankruptcy looms and some of it’s biggest lenders are pushing for liquidation.

[Ti14] “Three Myths That Explain Why Americans Don’t Know Much About History” though as in most things, it starts with how people are taught as children.

[Ti15] The owner of the limo company that was involved in the deadly crash in NY State has quite the timeline with the Feds: “Now, Mr. Hussain’s improbable journey — from asylum-seeking immigrant to petty criminal to trusted ally of government prosecutors, has taken yet another turn. His complicated past is central to the investigation of the nation’s deadliest crash in years.”

[Ti16] Well, that’s one theory of time: “The block universe theory says that our universe may be looked at as a giant four-dimensional block of spacetime, containing all the things that ever happen, explained Dr. Kristie Miller, the joint director for the Centre for Time at the University of Sydney. In the block universe, there is no “now” or present. All moments that exist are just relative to each other within the three spacial dimensions and one time dimension. Your sense of the present is just reflecting where in the block universe you are at that instance. The “past” is just a slice of the universe at an earlier location while the “future” is at a later location.”

[Ti17] Time is undefeated, even against 28 year old space telescopes: “Each time the telescope broke previously, a shuttle mission fixed it. “That we can’t do anymore, because there ain’t no shuttle,” says astronomer Helmut Jenkner of the Space Telescope Science Institute in Baltimore, who is Hubble’s deputy mission head. “This is not a catastrophic failure, but it is a sign of mortality,” says astronomer Robert Kirshner of the Harvard-Smithsonian Center for Astrophysics in Cambridge, Mass. Like cataracts, he says, it’s “a sign of aging, but there’s a very good remedy.”

[Ti18] Worth your time to find an obscure piece of history: “This D.C. monument is ‘virtually impossible’ to reach. Here’s how I found it — past the hornets, snakes and swampland.”

[Ti19] One of those “under the radar” indicators of what time it is economically: “Another element worth considering? The biggest buyers probably aren’t buying. It may seem counter-intuitive, but the largest single source of demand for American stocks is the American companies that issue them. Companies are on track to repurchase more than $770 billion in their own stock this year, according to research from Goldman Sachs. That’s more than twice the size of the next largest source of demand, exchange-traded funds, which last year bought $347 billion in shares. ”

[Ti20] Personal note: I hate the BMI, but not sure if this is an improvement, though: “It’s high time we moved past BMI — meet the metabolome”

29 thoughts on “Linky Friday: All in Due Time”