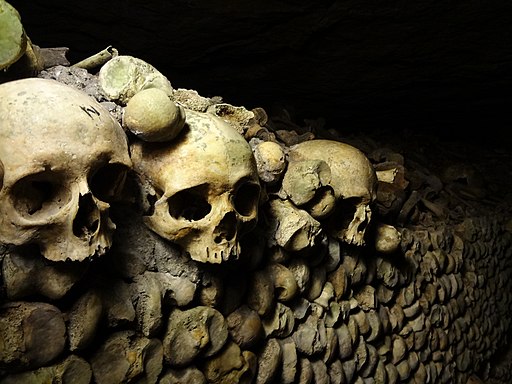 If one speaks of Paris, the mind first thinks of the well known sites and sounds of the iconic French city: The Eiffel Tower, bridges across the Seine, accordion music playing, artists painting, and pretentious folks smoking underhand at sidewalk cafes. But below the city of light is the darker, less romanticized resting place of former Parisians’ bones – 6-7 million of them in 200 miles of catacombs.

Though only about a mile of them are open to the public, what is known is that as the city’s cemetaries began overflowing, the decision was made to utilize the tunnels underground to house the dead. Long abandoned rock quarries that had been utilized to build Paris were now filled with the residents who once inhabited it. The poetry of this circle of life arrangement is quickly lost to the macabre efficiency of it. Skulls and bones stacked up, sometimes floor to ceiling, in some places piled almost haphazardly, while in others bones are laid with such intricacy that the departed appear almost to be a mosaic in pattern.

In 1763, Louis XV issued an edict banning all burials from occurring inside the capital, but because of Church pushback, which didn’t want cemeteries disturbed or moved, nothing else was done. Louis XVI, Louis XV’s successor, continued the crusade, also proclaiming that all cemeteries should be moved outside of Paris. It wasn’t until 1780, however, that anything was done. That year, a prolonged period of spring rain caused a wall around Les Innocents to collapse, spilling rotting corpses into a neighboring property. The city needed a better place to put its dead.

So it went to the tunnels, moving bones from the cemeteries five stories underground into Paris’ former quarries. Cemeteries began to be emptied in 1786, beginning with Les Innocents. It took the city 12 years to move all the bones—from bodies numbering between 6 and 7 million—into the catacombs. Some of the oldest date back as far as the Merovingian era, more than 1,200 years ago.

Beginning during the French Revolution, the dead were buried directly in the catacomb’s ossuaries. Some famous (or infamous) characters from history who call the catacombs their final resting place include Jean-Paul Marat, one of the Revolution’s most radical voices, and Maximilien de Robespierre, an influential figure during both the Revolution and the subsequent Reign of Terror. The city stopped moving bones into the ossuaries in 1860.

Before the entrance to the ossuary, there’s an underground space used for themed exhibitions (2014?s exhibit deals with Paris’ geological history as an ancient sea). As visitors pass into the ossuary, they walk under a doorway with a haunting inscription above: “Arrête, c’est ici l’empire de la mort!” (Stop! This is the empire of death!). Inside the ossuary, bones are grouped by the cemeteries that they came from. Some are neatly stacked along the corridors; others arranged in patterns, creating crosses and other images. 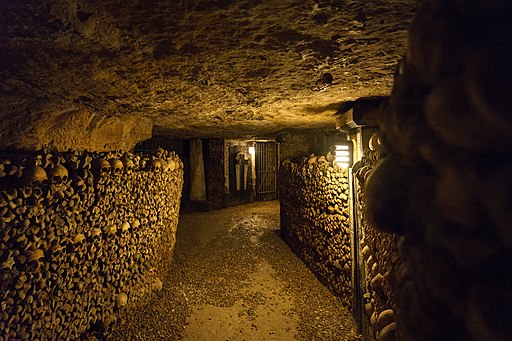 Naturally such place invites certain kinds of people. Whereas the catacombs once were a must-see destination to the royal families and rich of Europe, folks of a much lower social standing have long utilized the tunnels for their own purposes. Those that wish to conduct their affairs away from prying eyes have long made such forbidden areas their playground.

In 2004, Parisian police were assigned to do a training exercise in a previously uncharted part of the Catacombs of Paris beneath the Palais de Chaillot. Entering the catacombs through a drain, officers first came across a sign that read “Building site, no access,” and a bit further in, a camera that actively recorded images of those who passed. As the officers approached the camera, a recording of dogs barking was triggered.

The police descended deeper into the tunnels and discovered a 500-square-meter cavern with a fully equipped cinema. It included a giant cinema screen, projection equipment, chairs and a handful of films, from film noir classics to recent thrillers. Someone had turned this abandoned underground cavern into a secret amphitheater. Aside from this, in the next “room,” police discovered a fully-stocked bar and restaurant, complete with tables and chairs. The discovery left police befuddled, not to mention the professional installation of electricity and three phone lines.

Three days later, police returned with experts from the French Board of Electricity to try and figure out where the power was coming from. The cables had been cut and a note lying on the floor read, “Do not try and find us.”

As it has been since the time of the Romans, the real ghosts of the empire of death are the living ones, using the dead to cover the deeds of those not yet at rest. 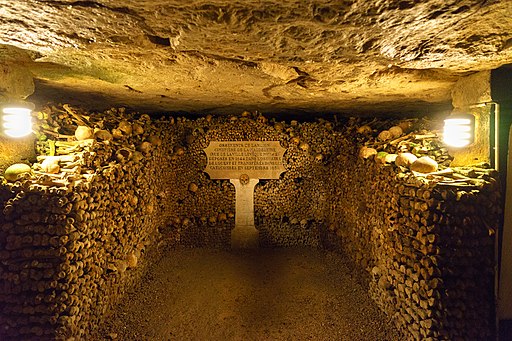 3 thoughts on “It’s Spooky Season: Empire of Death in the City of Light”