(Sam had a section in his essay about the splat movie Halloween discussing Michael Myers’s backstory detracting from what made the story work. So I got to thinking…) 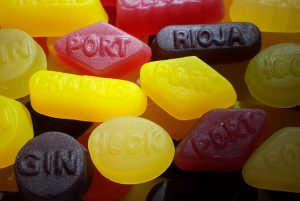 I mean, the 1971 film got a lot of stuff wrong about Willy Wonka. Gene Wilder went out of his way to want to communicate that you would never know whether Willy Wonka was being sincere. Remember the somersault?

Wilder said that he’d only take the role if he could do that. Why? “From that time on, no one will know if I’m lying or telling the truth.”

Which is an interesting take on the character. It’s not particularly true to the book… but, hey. Hollywood adaptations, right? (I always got the feeling that screenwriters had a story they wanted to tell and would just crowbar it into whatever script that producers asked them to write. “Hey, I’ve always wanted to retell Xenophon’s Anabasis with a little bit of Dante’s Divine Comedy. Willy Wonka? Eh. It’ll do.”)

So then, in 2005, they decided to make an adaptation of the book that was faithful to the original. In the book, Willy Wonka wasn’t supposed to be a stand-in for God (at least, I don’t think he was) but he was more a force of nature. A savant confectioner who is somewhat beyond our limited notions of right and wrong. So they went for that, kinda, and picked Johnny Depp to play Willy Wonka as a cross between Howard Hughes and childrens’ television show hosts from his youth. (Personally, I thought that they were going for some Michael Jackson in there too… but both Johnny Depp and Tim Burton say that there was no intention of any Michael Jackson at all so who knows?)

Gene Wilder’s Willy Wonka comes across as focused and calculating and, yes, you never know whether he’s telling the truth. Johnny Depp’s, by comparison, comes across as an almost neurodiverse character who wears his heart on his sleeve. Somewhat closer to the one from the book… even if it’s not a bullseye, it hit paper.

UNTIL THEY GOT TO THE END. They decided that what Willy Wonka needed was a backstory. And so ask yourself: what is the most hackneyed backstory you could possibly come up with for a master confectioner? Would it be… the son of a dentist? Who, in an effort to rebel from his father, made candy?

Yeah, that’s the most hackneyed one that I could come up with too.

And it’s the addition of that backstory that detracts from the movie entirely. Like, the first half was *PERFECT*. And it’s the addition of the backstory that has you wondering why they went for note-perfect following the book in the first half only to throw everything off the rails in the second. Say what you will about the Gene Wilder movie, but it had a point of view that let you say “yeah, I see what they were going for when they decided to stray from the path laid out in the book.”

The Johnny Depp one? Why did they think that the perfection of the book would be improved by giving Willy Wonka a backstory?

I could see someone saying something like “well, where did Willy Wonka come from? That’s a problem!” Well, give him a backstory and guess what? If the backstory isn’t better than the mystery, now you’ve got two peoblems.

(Image is Wine Gums by Dominic Lockyer. Used under a Creative Commons License.)

3 thoughts on “Sunday Morning: Giving Willy Wonka a Backstory was a Mistake”