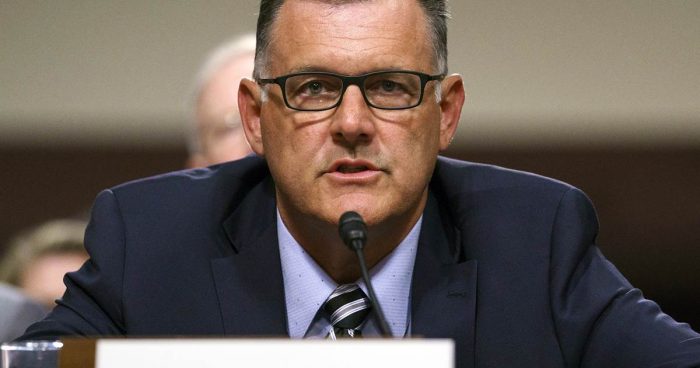 Steve Penny, the former boss of USA Gymnastics, was arrested yesterday on a single felony charge of having tampered with evidence related to ongoing investigations into Larry Nassar. This charge seems at odds with his performance before Congress in 2017. There, he haughtily asserted his 5th Amendment rights, but only after making the following statement:

Mr. Chairman, with respect to you and your question and the committee, I have been instructed by my attorney to assert my rights under the Fifth Amendment to the constitution. Which, according to the United States Supreme Court in Ohio v, Reiner, protects innocent men who might otherwise be ensnared by ambiguous circumstances, where truthful responses of an innocent witness may provide the government with evidence from the speaker’s own mouth which it would somehow use against him. For that reason, and based upon the advice of my attorney, I must respectfully decline to answer your question.

Penny wanted everybody to understand that he was innocent, which is why he twice insisted that he was innocent, and that the Nassar situation was nothing more than an ambiguous circumstance. Was that an enormous “Fuck you!” to Nassar’s victims? Well, yes, of course it was, but now it is clear that at least part of the reason that Penny was so certain of his own innocence was that he was hiding documents from investigators that might have indicated his guilt. Those documents included medical records that had been previously kept at the Karoyli Ranch.

Penny resigned from USAG in March 2017. He had been repeatedly accused of covering for Nassar despite persistent reports about the doctor’s abusive behavior. Penny often refused to contact local authorities about claims being made about Nassar. When he resigned, he released a brief statement that, gallingly, included this:

We all care deeply about the safety of our athletes, which is fundamental to a rewarding experience at any level of gymnastics. It has been heartbreaking to learn of instances of abuse and it sickens me that young athletes would be exploited in such a manner.

Penny was arrested in Gatlinburg, Tennesee, although the charge itself stems from an ongoing investigation in Texas. Law enforcement officials from the state are continuing to examine the Karolyi Ranch, a former national team training facility, and have already secured indictments against both Nassar and Debbie Van Horn, another trainer who worked there. Simone Biles, one of America’s greatest ever gymnasts, had reported that Nassar had abused her there. Aly Raisman, one of Biles’ teammates, vocally insisted upon the Karolyi Ranch’s closure; the USAG abandoned the facility soon after.  The Karolyis, perhaps predictably, have claimed that they knew of no abuse that occurred there, and had little to do with medical oversight within their own facility.

But in perhaps the least shocking news that is possibly imaginable, gymnasts have vehemently disagreed with the Karolyis’ assertions about their hands-off handling of their own facility. They described a far more brutal approach managed meticulously by Marta Karolyi. The nature of the Karolyi Ranch – which has been described as a black hole owing to its literal isolation – provided Nassar an opportunity to repeatedly abuse athletes within its confines. Gymnasts have contended that Penny was an enormous part of the problem; his organization though insisted, just before he left the organization, that Penny was instrumental in protecting athletes from abuse. That effort included this claim, made in February 2017, in the aftermath of Nassar having already been named in dozens of complaints:

“USA Gymnastics is committed to doing everything we can to promote a safe environment for athletes. The organization and its policies and procedures have grown and evolved, and our focus is to help our athletes succeed and achieve their goals in a safe environment.”

Penny, for his part, has repeatedly refused to take any responsibility at all for what Nassar has done or for having enabled it. Penny relentlessly tried to tamp down ongoing concerns about Nassar. This included him recommending that athletes be interviewed about Nassar’s possible abuse but without their own parents or coaches present. That effort now also includes him having ordered documents removed from the Karolyi Ranch and brought to USAG headquarters in Indianapolis, where they have since disappeared. When Penny was interviewed about the possible abuse at the Karolyi Ranch earlier this year, a district attorney who worked with him described him by saying, “He didn’t provide much assistance.”

Penny would, presumably, claim that he declined to provide much assistance because he had already done everything that he could. He is, after all, an innocent man. He said so himself repeatedly and his lawyer again asserted his innocence in the aftermath of his arrest. And when he was not saying it about himself, his organization was saying it about him. Again and again and again, all of the players assured anybody listening that none of this had been their fault. Penny was among the very loudest doing so. Seems strange though that, if this were truly the case, he would have disappeared documents that surely would have proved his adamant claims.

One thought on “Steve Penny, Who Insisted Upon His Innocence, Has Been Arrested”