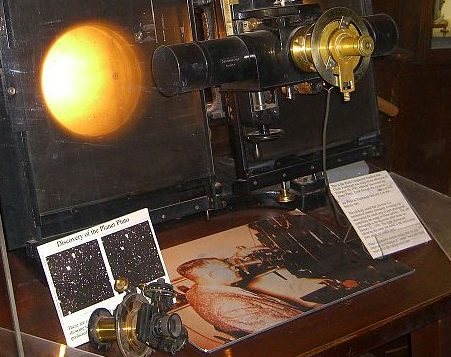 Blink comparator at Lowell Observatory used by Clyde Tombaugh in the discovery of Pluto.

[TT1] The most distant set of human remains is currently out past Pluto and getting ever more distant.

[TT2] Oh graphene, you amaze in ways big, and small.

[TT3] A new spin, or is it a twist?, on optical data transmission.

[TT4] I, for one, welcome our new Corvid overlords.

[TT5] Tavern out front, brick factory in the back.

[TT9] I want to see this adapted to spot false confessions.

[TT10] Oh yeah, you just know some Marine is going to use this to freak people out by making the air next to them ‘talk’.

[TT12] If the Corvids don’t get us, I’m pretty sure the Cephalopods will.

29 thoughts on “Tech Tuesday for 10/30, In Which Clyde Tombaugh Boldly Goes”