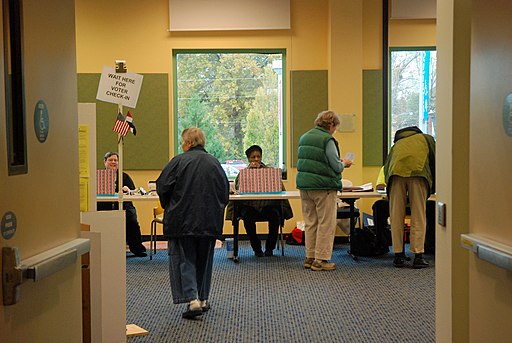 [El1] Voting in Early America by Ed Crews: “Among the first things the Jamestown voyagers did when they set up English America’s first permanent settlement was conduct an election. Nearly as soon as they landed—April 26, 1607, by their calendar—the commanders of the 105 colonists unsealed a box containing a secret list of seven men picked in England to be the colony’s council and from among whom the councilors were to pick a president. Captain John Smith, reporting from Jamestown, wrote that about eighteen days later, “arriving at the place where wee are now seated, the Counsell was sworne, the President elected, which for that yeare was Maister Edw. Maria Wingfield.”

[El2] The Vote That Failed: Old style ballots cast illegally in Indiana helped topple a president then he helped topple them. “The most celebrated martyr to ballot fraud and vote buying, Cleveland lashed out against the “vile, unsavory” forms of self-interest that “fatten upon corruption and debauched suffrage.” He called upon good citizens everywhere, to rise above “lethargy and indifference,” to “restore the purity of their suffrage.” And they did.”


[El4] Election 2000: Before and After By Wendy Underhill: “In the world of election administration, 2000 wasn’t just the start of a new millennium, it became the fault line between the “pre-Bush v. Gore” world and the “post-Bush v. Gore” modern era of elections. It highlighted how crucial ballot design and voting equipment are, and how important the laws and procedures governing vote counting would become.”

[El5] THE 1998 ELECTIONS: CONGRESS — THE OVERVIEW; G.O.P. IN SCRAMBLE OVER BLAME FOR POOR SHOWING AT THE POLLS: “Just two weeks ago, Mr. Gingrich had foreseen election gains of 10 seats to more than 40. Seeming uncertain yesterday, he said he had trouble accounting for the results.’Things were happening out there that none of us fully understand — neither party in my judgment,” Mr. Gingrich said.
Taking his share of the blame for his party’s losses, the Georgia Republican said he had misjudged how the public would recoil from the Clinton scandal and how the scandal would drown out other Republican themes. ”I mean I totally underestimated the degree to which people would just get sick of 24-hour-a-day talk television and talk radio and then the degree to which this whole scandal became just sort of disgusting by sheer repetition,” Mr. Gingrich said.”

[El6] The Ugliest, Most Contentious Presidential Election Ever: “Although he captured the popular vote, the newly “reconstructed” states of Louisiana, Florida and South Carolina, still under federal occupation, hung in the balance. The Republican Party, which controlled the canvassing boards, quickly challenged the legitimacy of those states’ votes, and on a recount, supposedly supervised by personal agents who were dispatched to these states by President Grant (along with federal troops), many of Tilden’s votes began to be disqualified for unspecified “irregularities.” Democrats had no doubts Republicans were stuffing ballot boxes and claimed there were places where the number of votes exceeded the population. Most egregious was Louisiana’s alleged offer by the Republican-controlled election board: For the sum of $1,000,000, it would certify that the vote had gone to the Democrats. The Democratic National Committee rejected the offer, but similar reports of corruption, on both sides, were reported in Florida and South Carolina.”

[El7] The election of 1864 and the last temptation of Abraham Lincoln: “Even Lincoln had lost all hope. “You think I don’t know I am going to be beaten, but I do, and unless some great change takes place, beaten badly,” he told a fellow Republican. On Aug. 23, he committed his pessimism to paper. “This morning, as for some days past, it seems exceedingly probable that this Administration will not be re-elected. Then it will be my duty to so co-operate with the President-elect as to save the Union between the election and the inauguration; as he will have secured his election on such ground that he can not possibly save it afterwards.”