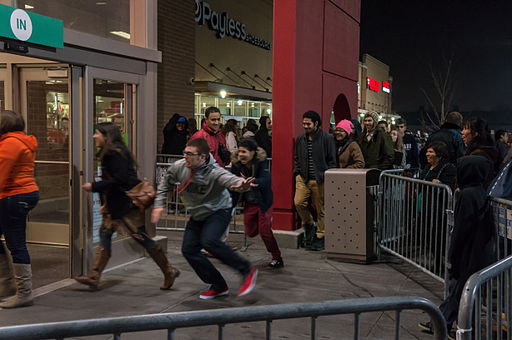 “And she gave birth to her firstborn son and wrapped him in the latest styles from Old Navy, and laid him in a shopping cart, because they were waiting in line to get into Walmart.”
– Adam Kotsko


[Bf1] Black Friday is longer, and tamer, than ever: Black Friday crowds aren’t what they used to be. That doesn’t mean the holiday is going anywhere.

[Bf2] How Walmart is trying to reinvent in-store shopping to win Black Friday: To better compete with Amazon and other retailers, Walmart is increasingly using technology to improve its in-store experience

[Bf4] Black Friday sales could be targeted as “prime pickings” for cyber-crime, the UK’s cyber-security defence agency has warned shoppers.

[Bf5] Why the annual Black Friday shopping event sounds like a disaster: From a Wall Street crash to Australian bushfires, ‘black’ days usually denote catastrophe. So what makes this day of runaway consumerism any different?

[Bf6] Gunman killed during Black Friday sales at Alabama mall: Multiple witnesses said they heard as many as 10 shots after an 18-year-old man and a 12-year-old girl were injured when they were struck by gunfire.

[Bf8] Is it time to put Black Friday out of shoppers’ misery?

[Bf9] Our own Vikram Bath’s thoughts on Black Friday

[Bf12] ummm….they, and more specifically Amazon, already seized on it, which is why it no longer exists. Walmart and Target seize on the first Black Friday without Toys ‘R’ Us

[Bf13] Amazon Workers In The UK Are Planning to Protest on Black Friday. Here’s Why.

[Bf14] Nope. The last Kmart in Tampa Bay welcomed buyers on Thanksgiving. Is it enough to save the chain?

[Bf15] Amazon does a little shopping of their own: The complicated reasons why Amazon might buy Fox Sports Southwest and its siblings

[Bf16] ‘Wallywood’ fire camp begins to disband after Walmart asks evacuees to leave. Will it hurt the store’s image?