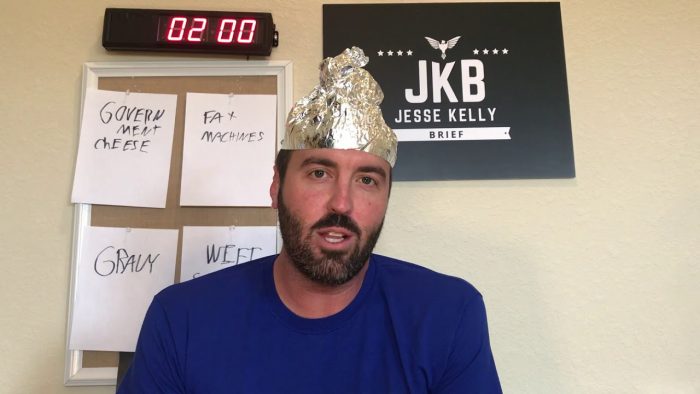 If you are not on Twitter, none of this will be of any importance to you. You may not even know who Jesse Kelly is, unless maybe you recall my piece about him a few months back. To get you up to speed: Jesse is a Marine combat vet, former Congressional candidate, and bombastic right-wing commentator. He has appeared on Fox News and has his own radio show. I wrote about him when he and I had a short debate on Twitter and one of his followers infested my inbox with vile insults and bad grammar.

Kelly is his own brand. He is known for his suggestion that the United States should amicably break up, with a new civil war the only other option. He has a penchant for violence-as-metaphor, once imagining himself on a battlefield taking the scalps of his liberal enemies.

With opinions like these (and him being like 7 feet tall), he is a lightning rod. His Twitter account, chock full of decidedly hawkish, Alpha He-Man takes, amassed something like 80,000 followers. Women want him and men want to be him, as they say. You can imagine both the weeping and the gnashing of teeth when his fans heard that Twitter had banned his account.

It is not clear what exactly caused Twitter to ban Kelly. I don’t follow him, but enough people do that his tweets make their way into my timeline every day. I’ve never seen a directed threat or anything ban-worthy. Offensive and controversial comments, most definitely, but nothing that I would call worthy of capitol Twitter punishment. In handing down the death sentence for @JesseKellyDC, Twitter simultaneously created a martyr and shot themselves in the foot. The move only amplified Kelly’s presence, as his followers began hash-tagging “free Jesse Kelly” and changing their avatars in support. His name was trending within hours of his removal. Some deactivated their own accounts in solidarity. Thus, the platform managed to confirm a conspiracy theory among the right: Twitter is out to get conservatives.

This idea that Twitter is an anti-conservative bastion of liberalism was bolstered by Twitter CEO Jack Dorsey’s admission of the platform’s “left wing bias”. Kelly’s ban followed the ouster from Twitter of far-right luminaries such as Laura Loomer and Alex Jones. Few were sad to see Loomer and the odious Jones go; nevertheless, many people expressed worry that Twitter’s unfair silencing of extreme right view points was a step in the direction of muzzling even more moderate conservatives. Kelly himself had warned of the slippery slope.

Luckily for him, it came true. Lest I seem callous, rest assured Kelly also knows that he will come out on top of this, as he writes in his new piece for The Federalist following his Twitter ban. Just as his larger-than-life Twitter persona earned him his own radio show, his martyrdom for the cause of conservative commentary will earn him a wider audience. Indeed, this is just one of probably at least a half-dozen pieces that has or will come out to opine on this situation. And, I would note, Twitter almost always eventually reinstates  “permanently banned” accounts. In the end, it will be a net win for Jesse Kelly.

As I said in my previous piece, I believe that Kelly is, at base, a good person. In fact, I have seen him do good on Twitter. I have seen him spearhead fundraising events and assistance for flood victims. I’ve seen him offer himself as support for struggling veterans. I just happen to disagree vehemently with his politics and find much of his rhetoric over the top and distasteful. But when I ran that essay about my interaction with him, it caught his eye (because, I like to think, he probably does a search of his own name every day). He good-naturedly retweeted the link, highlighting his favorite part of my piece: the part where I said he was good-looking. He even called me an excellent writer- which I chose to take as sincerity rather than further praise for my choice of subject matter.

I do not believe that social media should ban anyone, short of those threatening the physical safety of others.  There are “mute” and “block” features on Twitter that one can utilize, should one find it necessary to live in an echo chamber. But whether a simple byproduct or by design, this ban is nothing more than free advertising for the Jesse Kelly brand.

110 thoughts on “The Martyrdom of Jesse Kelly”