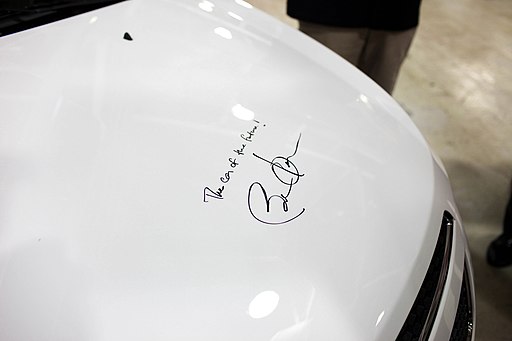 It was only a few years ago that Lordstown, which sits 20 odd miles away from the remnants of the once thriving steel industry of Youngstown, employed as many as 4,500 workers. The General Motors Assembly plant had flirted with closure before, but seemed to be revived not long ago when GM moved car production for the Chevy Cruze there in 2000. But now it has been “unallocated” for 2019, a more pleasant and truncated way of saying nothing will be produced there, and no plans to do so are forthcoming. To the workers – some of them children, grandchildren, and other relations to the men laid off that September morning in 1977 – this is a movie they have seen before.

Deja Vu All Over Again

The first Black Monday refers to the Monday morning when 5,000 men of the Campbell Works of Youngstown Sheet and Tube were informed they would no longer have jobs after that following Friday. It was called a furlough, but it was permanent, a fact the company knew at the time and the workers would learn slowly. Soon other names followed: Briar Hill Works, the rolling plants in Warren, US Steel’s Ohio operations, Jones and Laughlin Steel, Republic Steel, and soon almost all the rest. Each name was measured by job loss in the thousands. From the late 70s to today, 50,000 jobs have been lost and the Youngstown area bled roughly 100K in population. 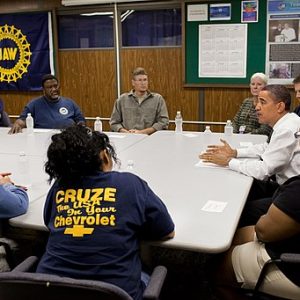 When GM went through bankruptcy, Lordstown was widely rumored to be on the chopping block, but the announcement of the then-new Chevy Cruze being allocated brought new life. Such was the demand that GM moved furloughed workers from elsewhere to the Mahoning Valley to make up the gap from recalling the plant’s own laid-off work force. So dramatic was the reprieve it warranted a presidential visit from Barack Obama, touting the new life of the plant as part of a slow but desperately in need of good news economic recovery. Folks didn’t even mind that the plant was even more “assembly” than ever before, with the Cruze that was finished there being a Korean design with a German drive-train.

But that started to change last year. In March of 2017, the third shift shut down production and those workers were laid off. In April of 2018, the second shift followed suit. Then Monday, 26 November, came word that the plant would be shut down for good in March of 2019.

This time it isn’t just Ohio feeling the cut. GM’s announcement covered 5 North American facilities and more than 14,700 jobs total. Those numbers don’t include the ripple effect of large plants closing down, as everything from supply chains, transportation, logics, and the local economies will be affected. Youngstown knows that part of this all too well. With Lordstown being the area’s second largest employer, the damage to the local economy is immeasurable-but not unimaginable to an area still walking in the fog of past economic catastrophes.

“I knew immediately it was going to be bad,” Lou DeSimone remembered in an oral history of his own job being among those at Youngstown Sheet and Tube to end. “A rule of thumb was that for every steel mill job there is, there are approximately four other jobs in the community, anything from telephone operators to dry cleaners to bartenders. It wasn’t just the 5,000 people who lost their jobs, you had another 20,000 that were going to lose their jobs through the next year. I knew that was going to happen, and I knew it was going to be devastating. You take 25,000 jobs out of here, people are going to leave. They’re going to find a job to support their family, whether it’s Columbus or Timbuktu.” 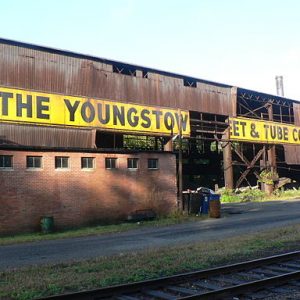 And they did. Today, Youngstown’s population hovers in the mid-60Ks, far short of its 1970s peak. Where once miles and miles of mills and works were now lay empty fields and the occasional rusted buildings. The old rolling mill of the Campbell works, where 20,000 men once plied their trades, now has less than twenty working in it. The medium income of the area is almost identical to the wages the typical steelworker was making the morning the end began in 1977, as if economic time had both stopped and accelerated. It is the perfect formula for socio-economic despair, and the incubator of disaffected politics.

“Another road show here in Youngstown”

A few months after the Lordstown’s 3rd shift ground to a halt, and 18 months after the area went surprisingly strong, along with much of the rust belt, for the Republican nominee for the White House, President Trump took the stage at a packed Covelli Centre in Youngstown in July of 2017. Among the usual trappings of a MAGA rally, the president was greeted with roars of approval when he declared about the manufacturing jobs in the area “They’re all coming back. Don’t sell your house.” While the style was decidedly Trump, the message wasn’t that much different than what President Obama said when visiting in 2009, or Hillary had in her campaigns of 2008 and 2016, or for that matter John McCain when he ran for president. So too for almost every politician that sought votes from the area, as promising jobs is standard boilerplate for both parties. Trump being Trump, he went even further: “If we don’t negotiate a great deal with Mexico and Canada, we will terminate NAFTA and we will start all over again,” he promised. The people at the rally ate it up, many of whom had voted for him in 2016. 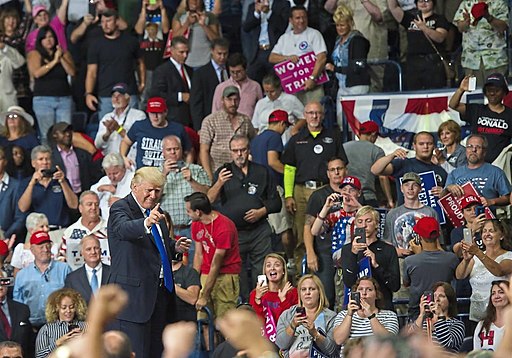 Those votes were the difference in a contentious campaign; the belief in promises and the response to Trump’s message was discernable in action at the polls. Mahoning and Trumbull counties had been traditional Democrat strongholds, but the former kept Hillary Clinton below 50% and the latter went Republican for the first time since 1972 in an eye-popping 38-point swing that stood out even amongst the most surprising of 2016 results. NAFTA has indeed been renegotiated, and Trump spoke often of steel and aluminum, vital components both historically and currently to Youngstown, during his insistence on tariffs and his escalation of a trade war with China and others.

But none of that saved Lordstown, and not only will the jobs not be coming back, the ones that remained are also going away. On November 19th, United Auto Workers Local 1112 Union Hall in Youngstown hosted the kickoff for what was being called the “Drive it Home” campaign to encourage GM to invest in the Lordstown complex and the Youngstown community. It was a play off a similar “Bring it Home” campaign that was successful in the 80’s.

Drive it Home lasted 7 days before GM announced the closing.

The Politics of Frustration 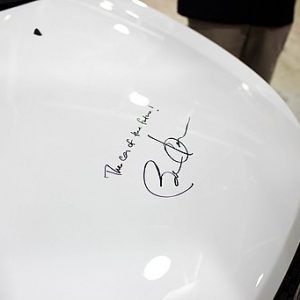 GM’s issues predate the Trump presidency, and individual factory closings have little to do who sits behind the Resolute Desk. Mid-sized cars like the Cruze are being all but abandoned in the North American market by not just GM but also Ford, with other manufacturers scaling back in favor of popular SUVs and crossover vehicles. President Obama signed a Cruze hood on the assembly line as “car of the future” ten years ago, an eternity in the constantly evolving automotive world. Time and tastes move on. It wasn’t then-President Jimmy Carter’s fault in ’77 that the steel industry had failed to improve their technology and manufacturing techniques to match the brand new, post-war mills of Europe, Japan, and elsewhere years before. Like Trump with Lordstown and the other GM plants the business side of the closure equation was decided long ago. Carter did pay for the economic malaise, among other issues of the late 70s, when he was swept from office on the tide of Reagan.

But then again, Carter never promised to be a savior in a cardigan during his now-infamous attempt to speak to a scared and economically hurting country.

President Trump very much has, and the man who wears his successful businessman persona the same way he does his suits will have a hard time playing this off in Youngstown between now and 2020. With both sitting Ohio Governor John Kasich and Ohio Democrat Senator Sherrod Brown expected to run for the White House in two years, expect the plight of the Lordstown closing to be brought up frequently. The same will be true in Michigan, where Trump carried that essential state by less than 11,000 votes. Two GM facilities will also be closing there, and no doubt similar sentiments will flow from the politicians and affected people there.

Such events play perfectly into the messaging that lifted Bernie Sanders into real contention in 2016, and will be a major theme again in 2020. “The company reaped a massive tax break from last year’s GOP tax bill and failed to invest that money in American jobs,” the senator tweeted after the announcement, “corporate greed at its worst.” Another 2020 presidential aspirant, Amy Klobuchar, who is the Democratic Senator from the western edge of the Rust Belt in Minnesota, similarly Tweeted, “Rising inequality hurts everyone and the tax bill made it worse: GM layoffs are another victory for capital over labor.” More complex an issue is the effect that the tariffs imposed by the Trump administration on steel, aluminum, and other source materials affected decisions, but whatever number crunchers come up with it surely didn’t help.

If frustrated populism was the wave Trump rode into office, it may well be the same force that wipes out his presidency. Hope can bring in the votes, but no rhetoric can replace lost jobs, especially specifically promised jobs. During the campaign much was made of Trump’s quip that “I could stand in the middle of 5th Avenue and shoot somebody and I wouldn’t lose voters.” He said it in Iowa, and much ink and characters have been spilled since deducing just how big the “Shoot Somebody” caucus might be. That will eternally be a matter of conjecture, but in 23 months we may very well know the exact price for crushing dreams in Ohio and Michigan. For the Mahoning Valley, another Monday that will be remembered by the 4-digit number of jobs lost passes with nothing but questions, and trials, on the horizon.

70 thoughts on “Despite Promises, Another Black Monday for the Mahoning Valley”