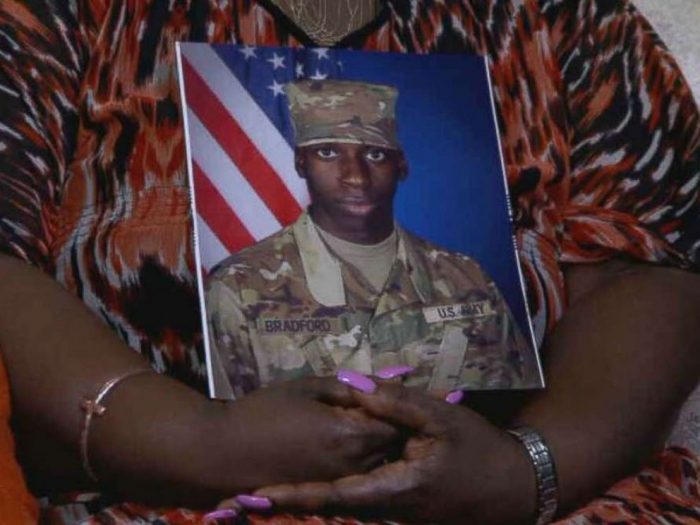 Emantic Bradford Jr. was in an Alabama mall when shooting broke out at a Black Friday sale. He was legally licensed to be carrying a firearm. Although he had his gun with him, it is not clear if he drew it. He was the mythical good guy with a gun that gun advocacy groups like the NRA are forever insisting are a necessary bulwark between criminals and those that they would victimize. The Hoover Police Department saw Bradford Jr. differently though, shooting him to death immediately upon arriving on the scene.

That same police then doubled down on Bradford Jr.’s killing. Instead of acknowledging what its officer had done, the Hoover Police Department initially lied about what had happened, insisting both that Bradford Jr. was the shooter and that the officer who killed him had acted heroically. These claims fell apart within hours. The police department retracted its earlier claim – which of course had already served its purpose of poisoning the well – and said, “We regret that our initial media release was not totally accurate, but new evidence indicates that it was not.” Three things became immediately clear: that Bradford Jr. was not the shooter, that the police had killed an innocent man, and that the police’s decision to engage Bradford Jr. allowed the guilty party to get away.

Witnesses to the killing have claimed – in stories that echo the killings of Tamir Rice and John Crawford – that no verbal commands were given before police started shooting at Bradford Jr. They have also claimed that police refused to allow a nearby medic to tend to Bradford Jr.s wounds. Officers, in other words, had no interest in giving Bradford Jr. even the opportunity to live. Bradford Jr.’s family is, very understandably, devastated by the killing, and has demanded that all relevant evidence, including video, be made publicly available.

The HPD has turned the investigation over to the Alabama Law Enforcement Agency and, while awaiting those results, returned to its previous business of justifying Bradford Jr.’s killing. In its newest telling of the story, Bradford Jr. was “brandishing” a gun, which was all the justification officers needed to kill him.

On Monday, it released this statement:

The HPD predictably refuses to take any responsibility for Bradford Jr.’s death in its public statement above. It describes what transpired as an “officer-involved shooting,” and one that occurred “during Hoover Police efforts to secure the scene in the seconds following the original altercation and shooting.” And then, “We can say with certainty that Mr. Bradford Jr. brandished a gun during the seconds following the gunshots, which instantly heightened the sense of threat to approaching police officers responding to the chaotic scene.” Critics immediately seized upon the HPD’s use of “brandished” to describe what Bradford Jr. had done; its initial claims about Bradford Jr. used the same term. Those critics pointed out that the HPD was still trying to justify an innocent man’s killing. So, a few hours later, the HPD tried a second time:

In this second attempt, the HPD is now acknowledging that it is using “brandished” to describe a man legally possessing a firearm in a public place. It is not clear why the HPD did not shoot other patrons who also drew weapons. It also insisted that it is “deeply and sincerely sympathetic to Mr. Bradford’s grieving family” before then adding, “we are a city that puts safety and respect in the highest regard for all citizens.” The statement’s author will presumably be shocked to discover what happened to Emantic Bradford Jr. (Perhaps the author was thinking of this case instead.)

Although many things are missing from the letter – including anything bordering on an honest description of what actually happened, as well as any evidence backing the HPD’s description of events – perhaps the most obvious is the name of Bradford Jr.’s killer. That individual has been thus far spared the sort of public investigation that might reveal more about his or her motivation. Or, cynically, that individual has been given the opportunity to clean up his or her online presence. But whatever the case, refusing to name the guilty officer follows a trend worth being suspicious of, in which killer officers are offered considerably more leeway than they ever offered their victims.

Take the case of Jemel Roberson for example. Roberson’s family is still awaiting the name of the officer who shot him to death earlier this month. He was a security guard at a nightclub in Robbins, IL; he was a good guy with a gun too. When shooting broke out there, he restrained one of the shooters. But like Bradford Jr., when police arrived on the scene, they immediately shot Robberson to death. Roberson’s family is holding out hope for justice. Emantic Bradford Jr.’s family is now doing the same thing.