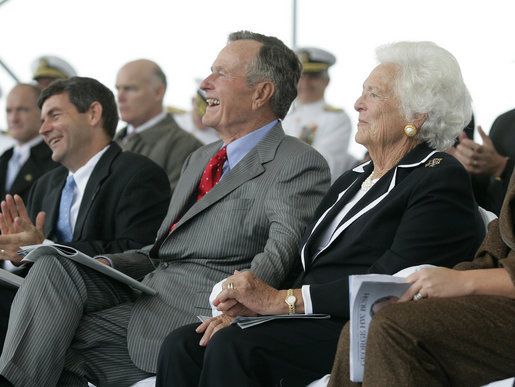 George Bush, the 41st president of the United States and the father of the 43rd, who steered the nation through a tumultuous period in world affairs but was denied a second term after support for his presidency collapsed under the weight of an economic downturn and his seeming inattention to domestic affairs, died on Friday night at his home in Houston. He was 94.

His death, which was announced by his office, came less than eight months after that of his wife of 73 years, Barbara Bush.

Mr. Bush had a form of Parkinson’s disease that forced him to use a wheelchair or motorized scooter in recent years, and he had been in and out of hospitals during that time as his health declined. In April, a day after attending Mrs. Bush’s funeral, he was treated for an infection that had spread to his blood. In 2013, he was in dire enough shape with bronchitis that former President George W. Bush, his son, solicited ideas for a eulogy.

But he proved resilient each time. In 2013 he told well-wishers, through an aide, to “put the harps back in the closet.”

Mr. Bush, a Republican, was a transitional figure in the White House, where he served from 1989 to 1993, capping a career of more than 40 years in public service. A decorated Navy pilot who was shot down in the Pacific in 1944, he was the last of the World War II generation to occupy the Oval Office.

The outpouring of sentiments was immediate.

America has lost a patriot and humble servant in George Herbert Walker Bush. While our hearts are heavy today, they are also filled with gratitude. Our thoughts are with the entire Bush family tonight – and all who were inspired by George and Barbara’s example. pic.twitter.com/g9OUPu2pjY

Hillary and I mourn the passing of President George H. W. Bush, and give thanks for his great long life of service, love and friendship. I am grateful for every minute I spent with him and will always hold our friendship as one of my life’s greatest gifts. https://t.co/1CYdrIeKmz

His biography, from shot down naval aviator in WW2, to election to the House, failed Senate candidate, UN ambassador, leading the CIA, and VP to President Reagan before his own rise to the White House, is astonishing. His post-presidency was just as remarkable, where he formed a bond with President Clinton, the man who had ousted him from office, and became a beloved elder statesman for the nation during humanitarian crises and other world events. He celebrated his 80th birthday by skydiving, and despite living with Parkinson’s which had left him confined to a wheelchair and motorized scooters in later years did it again at 90. His beloved wife of over 70 years Barbara preceded him in death 9 months ago.

Mr. Bush was never a man comfortable with self-examination, but in an interview with Mr. Meacham, his biographer, he evinced some insecurity about how history might judge him. “I am lost between the glory of Reagan — monuments everywhere, trumpets, the great hero — and the trials and tribulations of my sons,” Mr. Bush said.

At another point, he asked of those who would examine his career, “What if they just find an empty deck of cards?”

But the 41st president may have best summed up his talents and ambitions in a diary entry on the last day of 1989, as the first year of his presidency drew to a close.

“I’m certainly not seen as visionary,” Mr. Bush wrote. “But I hope I’m seen as steady and prudent and able.”

May our country find more leaders in the future who are steady, prudent, and able.