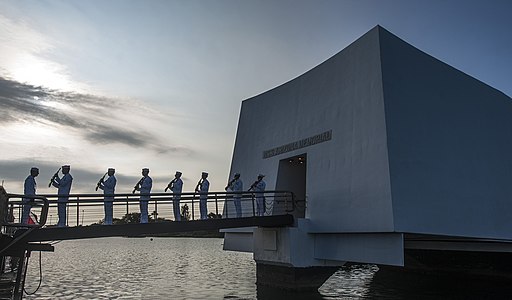 [In1] For first time, no USS Arizona survivors will be in attendance at ceremonies to mark attack on Pearl Harbor.

[In2] How the U.S. Navy’s Battleships Got Revenge for Pearl Harbor.

[In5] Before Pearl Harbor, these secret American heroes were already resisting Japan

[In6] On the morning of Sunday, Dec. 7, Jensen was the only physician on duty at the Naval Hospital. On a second-floor balcony overlooking Hickam field, he was stitching up the face of a soldier who had been injured in a bar fight. At 7:55 a.m., he heard explosions, then 20 planes flying low at a high speed, skimming the hospital’s roof.

[In9] On This Day in 1941?—?During the Attack on Pearl Harbor Lt. Annie Fox Earned the First Purple Heart Awarded To A Woman.

[In10] How (Almost) Everyone Failed to Prepare for Pearl Harbor.

[In11] Pearl Harbor Mystery: Where Is USS Oklahoma?

[In12] Utah Was the “Not So Famous” Battleship Sunk During the Pearl Harbor Attack.

[In13] Japan’s Midget Submarine Attack on Pearl Harbor Was a Suicide Mission.

[In14] How the Battleship USS Nevada and I Survived World War II.

[In15] How the U.S. and Japan Became Allies even after Hiroshima and Nagasaki.

[In16] Blame Alfred Thayer Mahan for Pearl Harbor (and Thank Him for Its Failure).

[In19] VIEWPOINT: Widow: “People are forgetting about Pearl Harbor”.