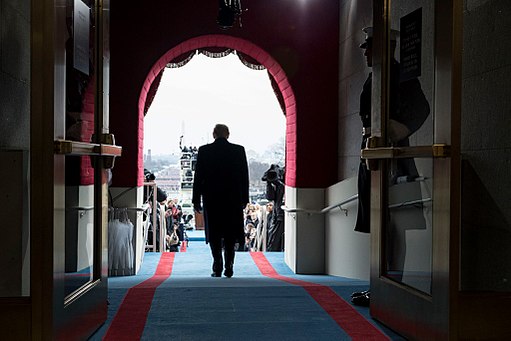 If it was not already clear, the combination of recent events surrounding the Trump presidency leaves little doubt this is an administration hunkering down.

The “Bunker Mentality” is nothing new in the White House. Almost every president of the modern era has been accused of it at various points. The late departed George HW Bush brought the phrase to the mind during the final part of his one term, after cutting a deal that broke his “read my lips” pledge. George W Bush’s final years dealt with the ongoing Iraq War, sudden economic crisis, and falling approval numbers, all coupled with an endless media assault. Barack Obama had his moments too; in the rollout of the ACA, when website crashes and confusion reigned, even a normally friendly press grew agitated at the lack of response. The starkest example would be Bill Clinton, who weathered the first impeachment and Senate trial for a president since reconstruction, and the various scandals that went along with it.

President Trump could be said to have been in such posture from day one.

Merriam-Webster defines bunker mentality as “a state of mind especially among members of a group that is characterized by chauvinistic defensiveness and self-righteous intolerance of criticism.” If you were to define the media strategy of the president using the same definition, it would pass scrutiny. The most ardent MAGA supporters count such characteristics as chief reasons to support him. The Resist! folks count the same as proof of his unfitness. Neither can ignore the president-or his statements, tweets, and actions-that stoke the fires of conflict between the two. That constant conflict has always been a feature, not a bug, of Trump since descending the escalator at Trump Tower and beginning his journey to the White House. It is the secret sauce that keeps engagement up and allows the president to drive the daily narrative with a tweet or comment. Now two years into his presidency, this feels different. With the announced departure of Chief of Staff John Kelly, long rumored to be on his way out, the administration seeks once again someone to helm the West Wing with the highest turnover rate of any administration ever.

Kelly himself contributed to that turnover, his initial appointment as Chief of Staff having been seen as an effort to bring discipline and order to the chaos surrounding the Oval Office. In short order, he restricted access to the president in the traditional manner of gatekeeper the CoS has always been, and was reported to have a hand in the removal of such Trump notables as Anthony Scaramucci, Sebastian Gorka, and Omarosa Manigault. The Mooch at least filled a traditional White House function, serving either 10 or 11 (He insists on the latter number) entertaining days as White House Communications Director. A memorable press conference where Scaramucci mostly talked about himself, coupled with a “crude verbal tirade” at White House staff was all the old Marine needed to show him the door.

Gorka and Omarosa both worked at the White House, but few officials seem to be able to actually describe their roles and what they did. The former was dismissed among a bizarre episode where he was first “on vacation” for two weeks, then leaked a resignation letter, then the White House issuing a “he doesn’t work here” message. The latter not only was dismissed but secretly recorded and released Kelly dismissing her, audio most found to be flattering to the professional demeanor of Kelly. During her media blitz to promote her book, Omarosa promised it was only the first of many recordings, which oddly enough never surfaced after attention to her plight waned. The Trump hangers-on were no match for the retired general, and briefly it looked as though Kelly, with the Presidents support, might bring a sense of order.

The one thing on which Kelly could not force discipline, exert influence, or change was the president himself. In recent months it was widely reported that Kelly and the president were on the outs personally. Kelly and his replacement at Homeland Security, Kirstjen Nielsen, increasingly found themselves allied together but alone in the room when decisions where made. That was due in no small part to Kelly’s long-rumored dislike of the official roles of Jared Kushner and Ivanka Trump. The president’s son-in-law and daughter hold nebulous roles, but their influence is mighty. At the end of the day they are family to the president, and no matter of rank or protocol will ever trump that. With her ally and old boss gone in Kelly, Neilsen is likely next in line for the cabinet carousel, and the ripple effect will cascade from there..

Thank you @realDonaldTrump, @VP, and my great colleagues for the honor to serve our Nation at The White House. I will be departing at the end of the year but will work with the #MAGA team to advance the cause. ?? #Georgia

The first such ripple was when Vice President Pence’s Chief of Staff Nick Ayers, reportedly Trump’s preferred replacement for Kelly, announced Sunday by a very Trump-like Tweet that he would not be accepting the position. This was in sticking to his insistence that he would leave the White House at the end of the year, and is probably a smart move for the ambitious Ayers who is thought to be eyeing his own elected office in his home state of Georgia. The search will now proceed with such names as Rep. Mark Meadows, Treasury Secretary Steven Mnuchin, and Office of Management and Budget Director Mick Mulvaney in the mix.

The Trump family is what makes this version of White House bunkering so different. With the incoming House of Representatives Democrat majority promising to investigate almost everything Trump related, not to mention the ever-looming Mueller probe, expect the ranks to continue to close to those most loyal to the president personally. No doubt the factions inside the White House complicate the role of whoever gets the nod, and the inevitability of the Trump-Kushner side being victorious whenever a decision is to be made means the next Chief of Staff will be less powerful than Kelly was at the time of his initial placement and subsequent house cleaning. Any one accepting the role has enough book on how the president conducts business to know that they are likely to be severely curtailed in power from previous CoS. This time loyalty will be at even more of a premium to a president who sees himself increasingly under attack. The bunker mentality being one of essential personnel only, President Trump will no doubt lean on those he trusts most, his family members, more as troubles mount.

Perhaps he should have checked with a military person like Kelly, or the also rumored-to-be-out-of-favor James Mattis on how bunkers work. Tactically, they do offer protection from the issues at hand, but strategically they also trap you into one place, with fighting a defensive battle against your enemy all you have left. The bunker mentality in a White House, once implemented, has historically meant a presidency that self-limits it’s effectiveness, as long as it perceives danger enough to bar the doors and windows of the executive from the slings and arrows of the outside world. With the House in the hands of the opposing party, it is doubtful any meaningful legislation is getting passed anytime soon. The investigations by that same body will be ongoing for as long as the president is in power opposite a split congress. The MAGA agenda, such as it is, will be wholly about defending the president for the foreseeable future.

Normally such a scenario would play to the president’s strengths. Having shown little interest in the legislative process other than demanding bills and deals from congressional leaders, President Trump can now play victim to an opposition party that is out to get him. Having built his political persona on fighting, there will be plenty of conflicts come January. The self-professed master deal maker having little to show for having both houses of congress, POTUS will now be free from such particulars as having to shepherd laws through congress. The president and his surrogates have spent the entirety of the special counsel’s investigation trying to flood the zone with doubt. Surely they will continue to do so, hoping if nothing else the public might just be numb to it all by the time 2020 rolls around.

And then there are the president’s opponents who have a habit of taking genuine items of concern and overplaying their hand with them. With many of the Resistence! folks having spent the last two years convinced that impeachment, if not imprisonment, was a matter of when, not if, there are high expectations for any coming investigations. Those folks might do well to remember that the reason for a bunker mentality from the White House isn’t just out of necessity, but because it can and has worked. Clinton survived being impeached and left office with relatively high approval. Bush, despite not fighting back against attacks to a fault (and how quaint that seems these days,) filled two full terms. But there is real cause for concern if you are in the Trump administration, not only in investigations but the 2020 election cycle that went into effect the moment the mid-terms concluded.

Whether President Trump makes it through re-election is not known, but how he handles the imminent siege will have a large role in determining the fate of his presidency. For a president that loves to fight, his supporters that love him for it, and his opponents who happily give him plenty of reasons both real and imagined to do so, the bunker mentality might be just the place President Trump wants to be. How it affects the country, however, remains to be seen.