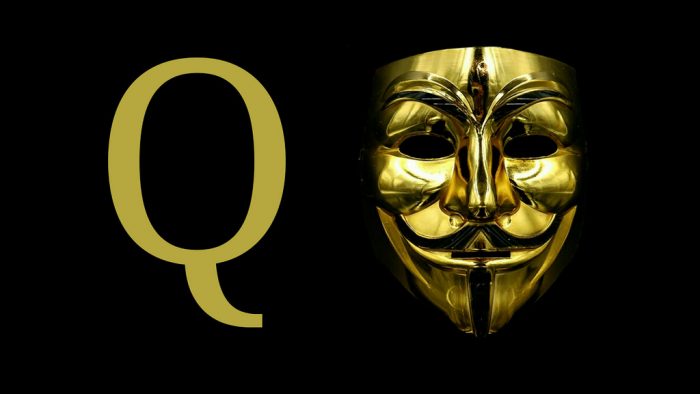 Gather round kiddos, and hear the tale of a trolling gone wrong. Or, possibly, gone too right.

There I was, scrolling around on Twitter wasting time as I am wont to do, when I get a notification that I’ve been tagged in a tweet by a friend. So after the nice dopamine hit elicited by the chime of the Twitter notification bell, I click. My friend thinks he is funny and he had tagged me in this bit of crazy: 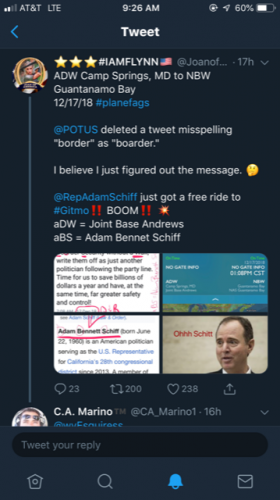 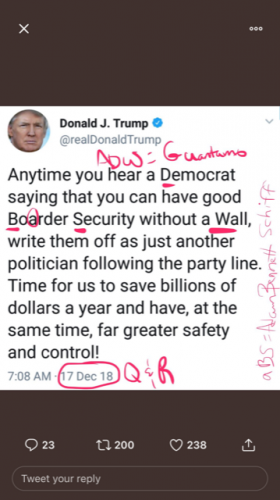 Following so far? Of course not, unless you are fluent in batshit (which I apparently am, as I will get to later). I’ll try to explain: our intrepid QAnon soldier, JoanofAmerica, has deduced that President Trump’s tweet contained a coded message, and through an intricate analysis of random letters, concludes that Adam Schiff has been flown to Gitmo (because he is part of the Deep State criminal pedophile ring). You see, Trump purposely misspells words and uses random capitalization in order to send secret messages to the Q faithful. You can see her painstaking deciphering work in the red scrawls on her attached screenshot, (along with requisite Wikipedia sourcing and the map that is proof or something.)

Because I can be a bit of an asshole, I did some of my own decoding (my contribution in blue highlighter): 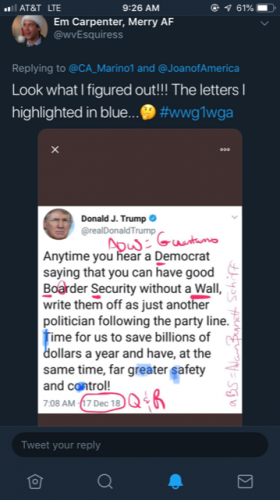 What are the odds, right? What are the chances I would be able to find the letters T-R-E-A-S-O-N all in the same tweet? It isn’t like those are super common letters. It’s clearly a message!

I thought at this point I would evoke anger and indignant rebuttal about my sheepness, maybe even a block. Generally the QAnon theorists dislike being mocked.

Imagine my horror, my utter and absolute horror, when this happened instead: 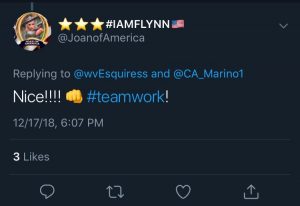 And then the likes came. And the retweets. And then, Lord help me, then the new followers, all from Tweeters whose bios read roughly this way:

I had unwittingly infiltrated and ingratiated myself to the cult, having apparently become fluent in their language without even knowing it. If any of my new pals had taken thirty seconds to peruse my timeline, it would have become evident that I was not the QAnon droid they were looking for, that I was simply having a little fun at their expense.

And then I started to feel guilty. I am clearly punching down here, picking on these gullible and impressionable souls. And worse, perhaps, I had fed their delusions with their favorite food.

What to do here? Do I delete? I really hate to, as it is some of my finest work. Should I soft block, so as to avoid disappointing them when they realize I am the enemy? I do enjoy the bump to my follow count.

While I ponder how to extricate myself from the gooey mire of QAnon Twitterland, please learn a lesson from my folly: You cannot troll those who have attached themselves to perhaps the biggest troll of all time; you might just find yourself the one trolled.

5 thoughts on “In Which I Step in Some QAnon, and Can’t Get it Off Me”