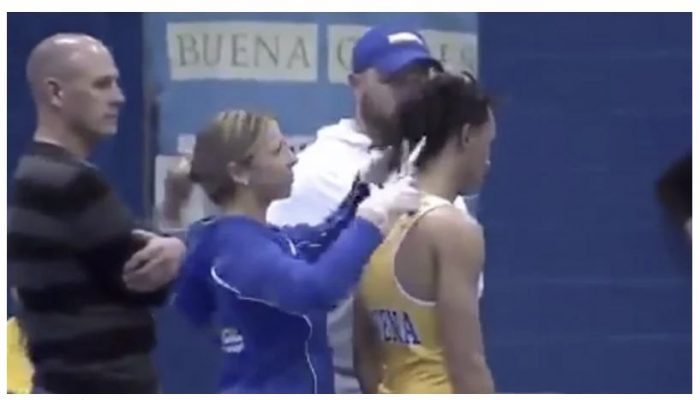 Andrew Johnson has dreadlocks. Or at least, he did have dreadlocks. He cut them off earlier this week on the orders of Alan Maloney, a wrestling referee, who offered him a choice: cut them off or be disqualified from that night’s match. Johnson cut them off, then won in overtime.

Johnson wrestles for Buena Regional High School. He had previously been wrestling with his dreadlocks under a wrap. It had caused no other problems this season. But on Thursday, Maloney apparently insisted that the dreadlocks had to go, despite the covering having had repeatedly passed muster.

Epitome of a team player ??

A referee wouldn't allow Andrew Johnson of Buena @brhschiefs to wrestle with a cover over his dreadlocks. It was either an impromptu haircut, or a forfeit. Johnson chose the haircut, then won by sudden victory in OT to help spark Buena to a win. pic.twitter.com/f6JidKNKoI

Click on that link though, and it becomes very clear that not everybody is convinced that what happened on Thursday was evidence of an individual’s willingness to sacrifice for his team. A second interpretation is that Maloney was motivated by explicit racial hostility toward Johnson; he was not interested so much in Johnson’s safety, in other words, but rather, his humiliation.

Informing this understanding of Maloney’s decision-making is the man’s very public past. In 2016, Malone and Preston Hamilton, another referee, received year-long suspensions after Maloney got into Hamilton’s face, jabbed him in the chest, used the n-word to describe him, and then had his ass handed to him by his enraged coworker. (Both suspensions would be later overturned.) Maloney denied having used the word but did acknowledge that other people present told him he had, in fact, done so. Maloney would later insist he had both sincerely apologized and that Hamilton had accepted his apology; Maloney made it clear that he thinks everybody should be expected to move on.

The fallout remained. Parents knew what Maloney was capable of saying. So did other referees. Given Maloney’s explicit racial animus, it became extremely difficult to imagine that he was refereeing matches from the imagined perspective of an impartial observer. But New Jersey’s wrestling federation refused to further punish Maloney, and insisted that it was up to individual schools to decide whether they were comfortable with Maloney refereeing meets. This column (also linked above) makes clear the potential issues with Maloney’s continued involvement in high school wrestling.

Likely the most visually recognizable official in South Jersey – and maybe the state – Maloney has found himself under the microscope again.

“It was handled by a process,” Maloney said. “Just like anything else, sometimes the process isn’t what people want. You’ve got to accept it, right? So why can’t this be accepted?

“I’ve taken things on my own to make me a better person, anyhow.”

Maloney, despite the racial slurs and the concern about his impartiality, passed muster with enough people to get back into refereeing, which brings the entire story back to Thursday night’s decision to insist that one player choose between his hair and his competition, despite workable and previously accepted solutions being available. Maloney has said nothing publicly about his decision; neither has Johnson or Johnson’s coach.

At least one other referee has rushed to Maloney’s defense. Ron Roberts explained that although Johnson was wearing a cap, it may not have been properly attached to his headgear, a new rule which was being unevenly enforced throughout the sport and the state. Roberts insisted that the rule prevented wrestlers with hair past their earlobes from wrestling without wearing proper headgear. Roberts admitted that he had not actually seen the video; Johnson’s ears are completely visible in it, although it is unclear if that is pre-or-post haircut. Roberts said that the entire situation was unfortunate for Maloney, apparently believing it unreasonable to consider a single decision within a broader historical context.

Here we arrive at the familiar, and all too predictable, cultural moment, one in which some people suggest that something was motivated by racial hostility and other people get so offended about the idea that something could have been motivated by racial hostility that they refuse to consider the possibility that it was. The first group will focus on Maloney’s history; the second group will focus on the rule itself while insisting that Maloney’s history had nothing to do with Thursday’s decision. There is no middle ground here. There will be no dissuading either interpretation.

It is perhaps interesting to note that this entire situation could have been avoided if only New Jersey’s high school wrestling hierarchy had broken ties with Maloney in the aftermath of his fight with Hamilton. Unfortunately, substantive consequences were only ever barely on the table for Maloney, who ended up having his behavior excused instead. That hierarchy instead chose to work with a man who had not only voluntarily made his racial hostility clear but had introduced doubts about his impartiality into the minds of some, but not all, observers. That hierarchy apparently never considered the possibility that Maloney’s subsequent decision-making might be considered in concert with his own history. Thursday night is what came next. One wonders if that hierarchy will learn its lesson.

Update: Maloney has been suspended pending an investigation.