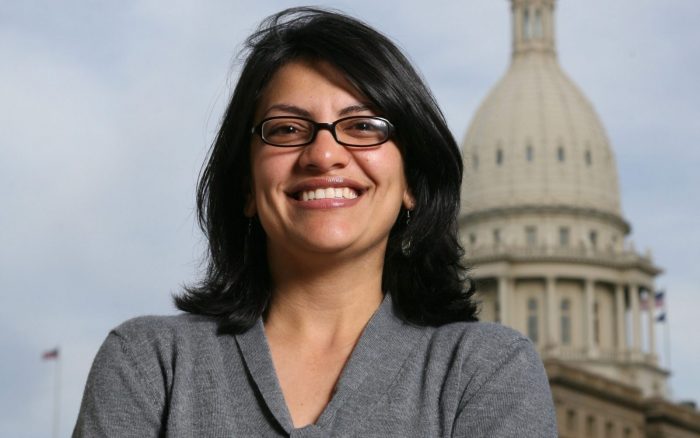 Rashida Tlaib said, “We’re gonna go in there and impeach the motherfucker!” She said it at a rally celebrating her having taken her seat in the House of Representatives. There is no denying that she said it, nor nuancing her intended meaning.

Raucous reception for @RashidaTlaib at MoveOn reception near the Hill. Her closing remarks: “We’re gonna impeach the motherfucker.”

Conservatives have, predictably, demanded smelling salts and are running screaming for their fainting couches. They are claiming to be deeply offended at such offensive language infecting our otherwise pristine discourse. All of this should be ignored, of course, but right on cue, here are former governors, former candidates, and current media members absolutely losing it that somebody, somewhere, said a swear about Donald Trump.

Disturbing. Anti-Semitic "Palestinian" Rashida Tlaib (there has NEVER been a nation called Palestine) erases Israel from map in her office & on 1st day as Congresswoman screams obscenities about @realDonaldTrump Do Dems support this bigotry and hate? https://t.co/AzapKAHquT

Perhaps all of those are easily dismissed as the very online rantings of various conservatives of unequal import. But here’s Kevin McCarthy – the Minority Leader of the House – responding to Tlaib, insisting that his Republicans were the kind of upstanding representatives that Americans could believe in.

MCCARTHY: "You know what our freshman class did? They put together a resolution to not use foul language. This is the difference & it's wrong."

REPORTER: But Trump recently called a woman 'horseface.' Who within your caucus called him out? ???

M: "I think a lot of them did" pic.twitter.com/axHOjBOMau

Folks like McCarthy have a very real problem. They have voluntarily hitched themselves to Donald Trump. To claim that they are offended by foul language while embracing a president who openly bragged about assaulting women is ludicrous. A reporter recognized what McCarthy was trying to do almost immediately, and although he did not reach for the most obvious example, asked McCarthy to name the members of his caucus who had publicly blanched at Trump’s description of Stormy Daniels, his former paramour, as a “horseface.” McCarthy, not having a good answer, decided instead to simply lie, claiming that a lot of his caucus had objected, which is a bold play in that it is not even remotely true. (Several Republicans did briefly tut-tut the president, but because conservatism is Trumpism, there was nothing consequential behind their criticism, nor any followup.)

Still, McCarthy wants everybody to believe that Tlaib’s description of the president as a “motherfucker” is an outrageous injustice that must be addressed. McCarthy has since demanded that Nancy Pelosi do something about Tlaib’s comment. It is unclear what exactly McCarthy wants, beyond a different set of rules for his side than what exists for the other one. That is, of course, the conservative playbook, one on ever fuller and clearer display during these past three years.

There was a time when conservatism at least made an effort to conceal the demand for separate playing fields. Trump has ended all that. There is nothing left but hoping like hell that nobody follows up ridiculous proclamations like McCarthy’s with, “Why were you okay when Trump did a much worse thing?”

Tlaib, to her infinite credit, is not backing down, nor apologizing, nor making any attempt to soothe the delicate feelings of aggrieved conservatives whose outrage is quite obviously performative nonsense.

I will always speak truth to power. #unapologeticallyMe

Houston’s Police Department Has A ProblemJohn Engler Cannot Get Enough Feet Into His Own MouthTwo Reviews Of “Spider-Man: Into The Spider-Verse”
[archive]
Please do be so kind as to share this post.